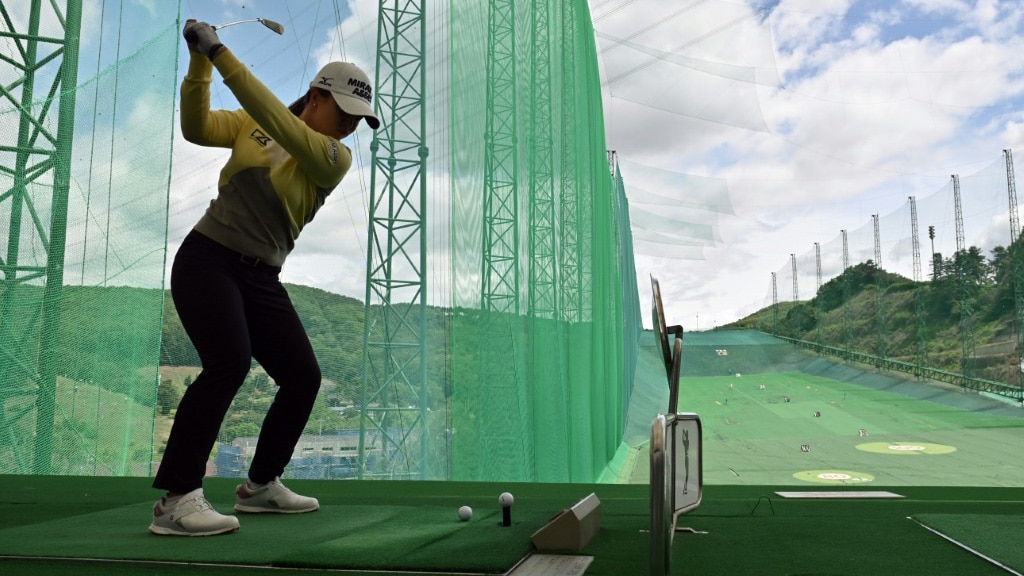 The country of 52 million people has a disproportionate share of the women’s world golf rankings, providing eight of the current top 20.

In a demonstration of their prominence, Korean women have won at least one major every season since 2010, with coronavirus cancellations perhaps the biggest threat to their run this year.

Of those, one element is critical — the unstinting support and relentless encouragement of parents, who wait for hours while children practice, shuttle them between venues and spend significant sums on coaching.

It parallels the time, resources and pressure many South Korean parents pour into their children’s academic development in the attempt to secure a sought-after place at one of the country’s top universities. 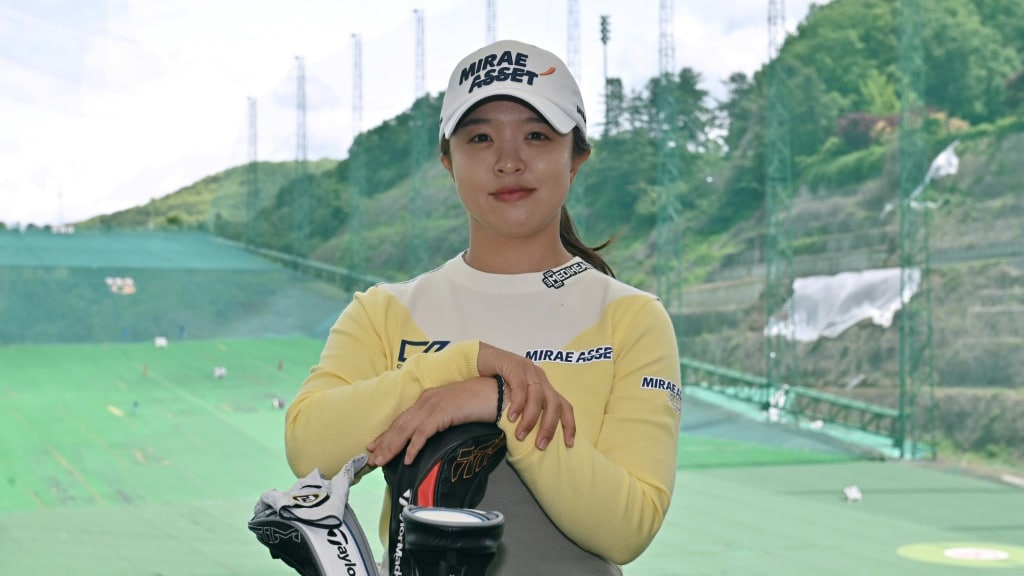 South Korea ranks eighth globally for number of courses, according to the Royal and Ancient’s 2019 Golf in the World report, with 798 spread across 440 facilities.

But while driving ranges and screen golf are cheap and popular, green fees often cost hundreds of dollars and clubs are seen as elitist and expensive.

“In the US, golf is a popular sport and people can access courses easily but here accessing one is laden with difficulty,” said Kim.

The potential returns on a golfing investment are huge: Kim has won a total of $8.8 million in prize money in the five years since her debut on the US-based LPGA Tour, where she holds the 72-hole scoring record at 31 under.

And even lower down the ladder, there are rewards on offer.

Unusually, the South Korean women’s tour is a bigger spectator sport in the country than the men’s equivalent, reflecting their contrasting fortunes.

South Korea has produced a handful of world-class men — including Y.E. Yang, Asia’s only men’s major-winner after he held off Tiger Woods at the 2009 PGA Championship — but nothing like the production line of top women.

Theories for the contrast include that the average physical differences between Asians and Westerners are smaller among women than men, and that male South Korean players’ development is interrupted by compulsory national service. 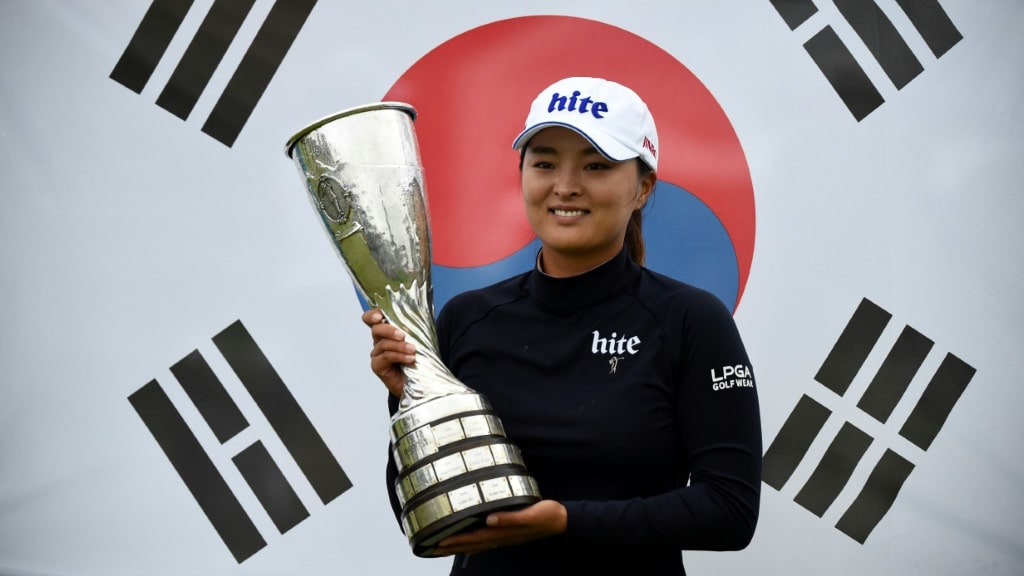 And several South Korean firms, often in the finance or construction sectors, sponsor golfers on the domestic tour, with the company logos appearing next to each player’s name on KLPGA scorecards.

The funding means that players can concentrate on training, said Chosun Ilbo golf journalist Min Hak-soo, while “sponsors invest hoping that their players will raise national pride just like Pak”. 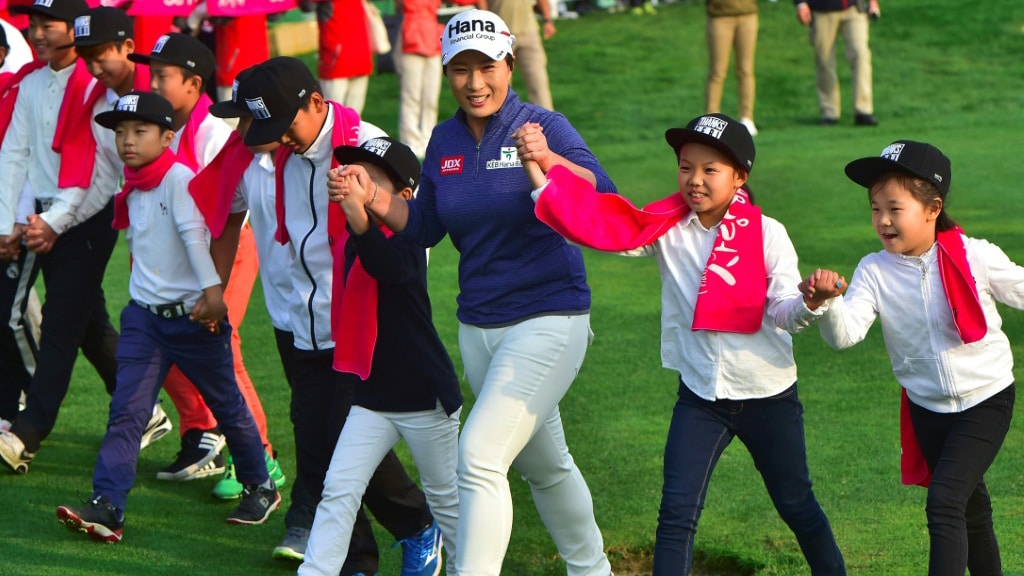 Kim, 27, is just one of the South Korean women to follow in the footsteps of Pak Se-ri, who won the 1998 US Open aged 20 in her rookie LPGA season, becoming the first Asian to win the oldest women’s major.

Her victory — including a barefoot shot from the water that contrasted her pale feet against her suntanned legs, a testament to endless hours of practice — made her a national heroine as the country reeled from the Asian financial crisis.

In a culture where success in international sporting competition is celebrated as symbolizing national power, Pak claimed the Order of Merit title that year and went on to win four more LPGA majors.

“If it wasn’t for her, we would not have even recognized there was a career path in the US LPGA,” Kim said. “She is a trailblazer.”

When she was young, Pak’s father reportedly took her to cemeteries in the dead of night to practice her swing next to the graves to toughen her up.

Pak later denied it ever happened, but that did not stop others being inspired by what was seen as the secret to her success, including former world number one Park In-bee.

Regardless of the truth of the story, Pak’s father’s “grueling training regimens instilled in her a deep sense of discipline alien to Westerners”, said Robinson.

“Those methods proved a winning template that has been unashamedly mimicked by Korean parents,” he added.

“The many dozens of Korean females who have become golfing multi-millionaires… owe a huge debt of gratitude to Pak.”