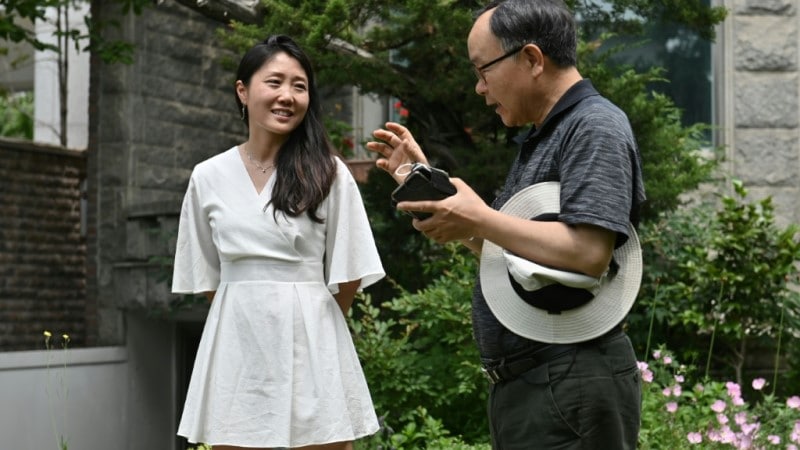 Kara ralks with Kim Do-hyun, president of a rights group for Korean-born adoptees

Growing up in Michigan, Korean-born Kara Bos always knew she was adopted. But when she finally located her assumed half-sister, the woman closed the door in her face and called police.

Now a court will rule Friday in a landmark case on Bos’ demand to be officially registered as her father’s child.

It could set a precedent offering nearly 250,000 adoptees a chance to demand legal recognition as members of their biological families — and uncover a host of long-hidden family secrets.

Bos, now 38, was two when she was found alone at a Goesan market, south of Seoul, and 10 months later she was adopted by an American couple.

She rarely thought about her birth family growing up, but when her daughter turned two, it hit her “deeply what it really meant to abandon a child at this age”.

“I thought about the excruciating pain my mother must have gone through to have to do this, and I wondered about the circumstances she could have been in to have to choose this painful path,” Bos said. 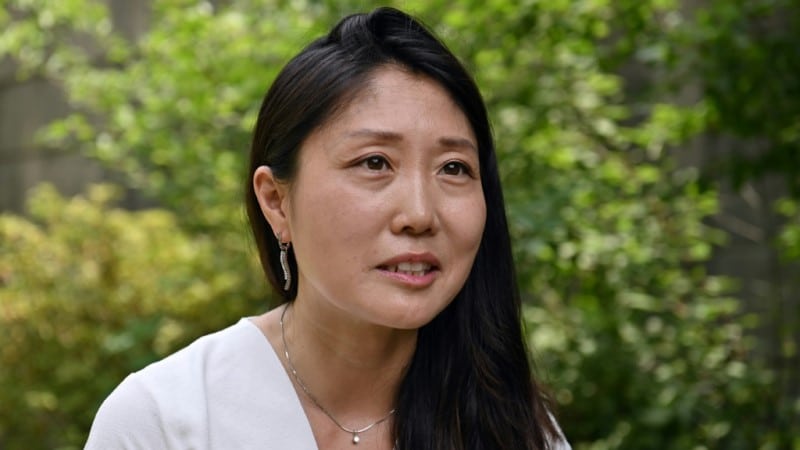 Kara Bos is determined to find her biological mother, and her quest may lead to big changes in South Korean law for adoptees

Efforts to trace her parents through adoption records proved fruitless, so she submitted a DNA sample to an online genealogy platform in 2016 and found she was related to a young Korean man studying abroad.

They established a relationship and worked out their common ancestor had to be his grandfather — the only person who could tell her who her mother was.

But his family wanted nothing to do with her, rejecting her request to meet her father.

“It didn’t matter the countless emails I sent begging and promising secrecy and never to contact them again if I could just find out my truth,” she said.

“Even when I begged on my knees out of desperation in front of his oldest daughter’s door for a face to face they would not allow me, and instead called the police on me,” she told AFP, calling her plight “excruciatingly painful”.

She filed a paternity suit, a move that revealed the man’s address.

When she appeared at his door asking in basic Korean if he knew her face, he “looked straight at me but then waved me off”.

Nonetheless a court-ordered DNA test showed there was a 99.987 percent probability he was her father.

“I just started wailing,” Bos said. “The truth had just set me free.”

Bos is seeking to be included in the man’s family registry, an official Korean document detailing all household members.

If Friday’s court rules goes in her favor her lawyer says she will be the first South Korean adoptee so recognized, giving her a legal entitlement to an inheritance. According to Seoul’s justice ministry, it could create a route for those with no records of their adoptions to apply for citizenship.

Around 250,000 South Korean children have been adopted since the 1950s, according to Seoul’s welfare ministry data, most of them overseas — the country was once among the biggest sources for international adoption.

After the Korean War it was a way to remove children, born to local mothers and American GI fathers, from a country that emphasized ethnic homogeneity.

More recently, it has been unmarried pregnant women who still face stigma in a patriarchal society — and are often forced to give up their babies.

Hosu Kim, a sociology professor at the City University of New York who researches South Korean birth mothers, around 10 percent of adoptions “point to extra-marital affairs”, with the resulting children never acknowledged.

The South’s existing laws prioritize birth parents’ privacy over adoptees’ rights, and the issue is shrouded in secrecy — many adoption files contain falsified information, or simply none.

Bos was only able to pursue her case because of the online DNA match.

But Kim said it could serve as a “critical precedent” that opened a way for adoptees to “claim their biological connections” and force fathers — and their existing families — to face the truth.

Bos believes she is the product of an extra-marital affair, “one last attempt with someone else to have a son and as I was a daughter he abandoned me”.

She hopes that once the court has issued its ruling her father will meet her and finally reveal her origins. “I just don’t know,” she said.

In many countries the children of sperm and egg donors have the right to know who their biological parents are, she added, but Korean-born adoptees did not.

“I think it’s something that’s fundamentally a part of us all, the need to know where we come from.” 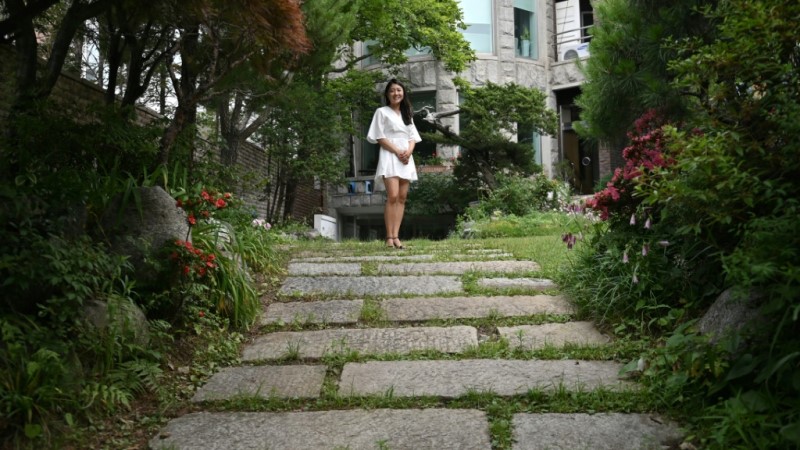 Kara’s half sister slammed the door and called the police, her biological father waved her away

A Seoul court on Friday officially recognized a Korean-born adoptee as the daughter of her biological father in a landmark ruling that she described as “momentous”.

Kara Bos, 38, broke down in tears after the Seoul Family Court delivered its ruling entering her in the man’s family registry, a move that could set a legal precedent.

His relatives had wanted nothing to do with her despite an online DNA match.

Bos — who was abandoned at the age of two and adopted by an American family — embarked on the legal battle to discover her birth mother’s identity, and her lawyers say she will now be able to access official records on her father’s family. 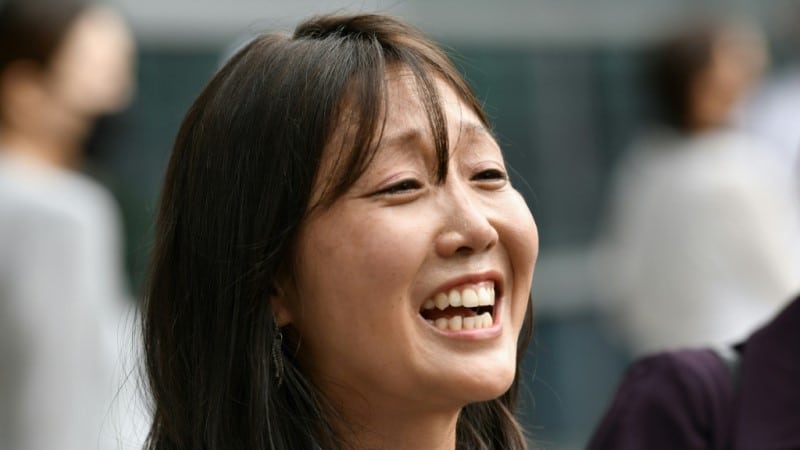 “This day is momentous for all of us adoptees just to have a right finally,” she told reporters, visibly emotional.

“The struggles we faced with not having any rights whatsoever to be able to contact our family… and I hope this can change in Korea.”

South Korea was once among the biggest sources for international adoption, having sent at least 167,000 children abroad since the 1950s.

But accessing records for returning adoptees is notoriously difficult due to laws prioritizing birth parents’ privacy over adoptees’ rights — the issue has long been shrouded in secrecy and linked to stigma.

Neither the man nor any of his relatives were present at the hearing. 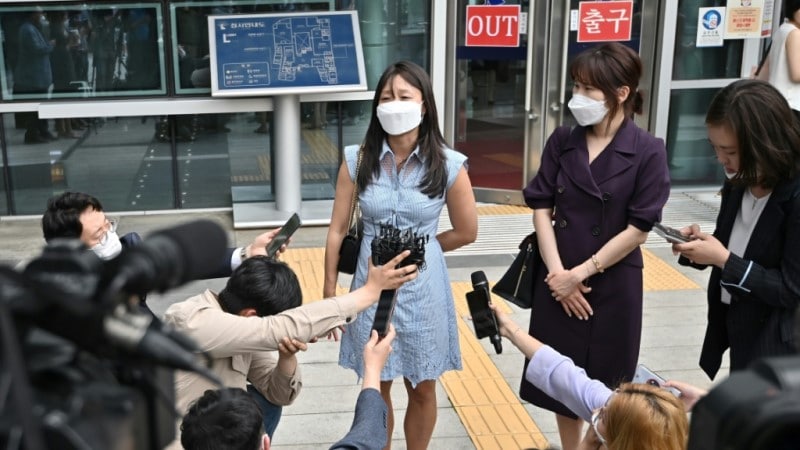 Growing up in Michigan, Bos, whose Korean name is Kang Mee Sook, rarely thought about her birth family, but when her own daughter turned two she started thinking about what her separation must have meant for her biological mother and decided to try to track her down.

After her initial efforts to trace her through adoption records and distributing leaflets proved fruitless, she submitted a DNA sample to an online genealogy platform in 2016 and found she was related to a young Korean man studying abroad.

With the match she was able to locate her half-sisters — the young man’s mother and aunt — but they wanted nothing to do with her, barring her from meeting her father, the only person who could tell her who her mother was.

One of them called police when she begged on her knees at her door.

In November she filed a paternity suit — according to her lawyers she is the first Korean-born overseas adoptee to have done so — and a court-ordered DNA test showed there was a 99.987 percent probability he was her father.

Inclusion in the family registry gives Bos a legal entitlement to an inheritance, but she said all she wanted was to find out about her mother and the truth.

“If secrecy… hadn’t shrouded my adoption story then maybe this could have all been resolved with my birth father’s family with a five-minute phone call,” she told AFP.

Bos said she plans to meet her father next week, and hopes he will finally reveal her origins.

“I hope… with this media attention, if my mother is watching, that she will step out and be an example of someone who can have courage just like I did to fight this fight,” she told reporters outside the court.

“Omma, I want to meet you,” she told the cameras in basic Korean. “Really, don’t be sorry. Please just come.”