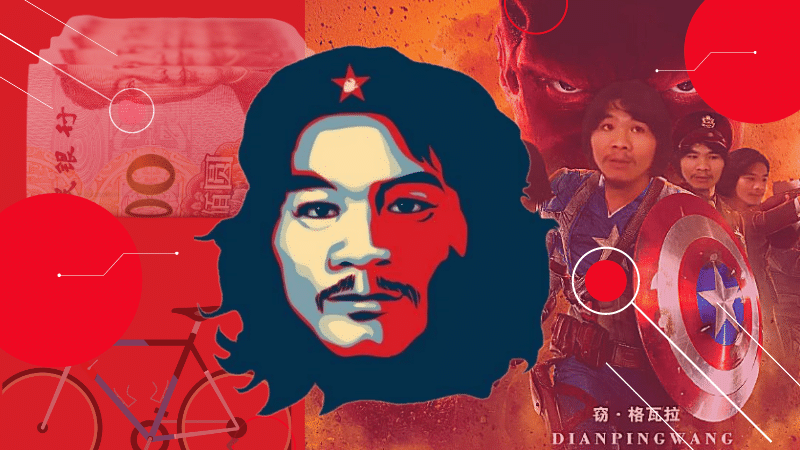 When the average convict gets released from prison, they would normally expect a challenging phase of reintegration into society and search for employment. But for one low-key bike thief, the day of his prison-release saw crowds of talent-agency recruiters waiting at the gates.

Zhou Liqi, aka ‘Qie Guevara‘ is not a name many may be familiar with. The small-town man grew up in an impoverished city in the southern Guangxi Zhuang Autonomous Region, where his youth was spent struggling to earn money through unlawful means. But what distinguished Zhou from most other low-level criminals, was his extreme stance on labor and conventional employment. It was his attitude that would eventually put Zhou under the spotlight of social media.

THREAD on bike burglar Zhou Liqi — aka Qie Guevara to his fans — who was released from prison last week and immediately courted by online agents hoping to turn him into the next big social media influencer. (In predictably iconoclastic fashion, he refused them all.) 1/ pic.twitter.com/oQY7jwRJsh

Zhou’s first public appearance was on Chinese video-sharing site Bilibili back in 2012, where he was shown being interrogated at a police detention center after an arrest made by local police. Zhou was convicted of stealing electric bikes – his ‘specialty’. The interrogation video, which went viral later in 2016 and has since drawn more than 270 million views, showed the rebellious man expressing no remorse for his actions, and justifying them by passing critique on modern capitalist ideals.

“I’ll never work for anyone,” Zhou passionately claimed, seemingly unbothered by his hand chained to the bars of the interrogation room window. “I have my hands and feet, but I won’t do labor, and I won’t do business,” he continues, “In my entire life I’ll never do it…” Those brief few moments of his appearance, ended up gaining him an enormous following and appraisal. The viral video resonated strangely well with young crowds across the country, who found truth in Zhou’s harsh judgement of society.

Little did Zhou know that while he was serving his (initial) one-year sentence, there was a crowd of fans building up, enough to follow up on his release. Due to his rugged bearded appearance, and his ideological motives resonant with those of the Cuban revolutionary leader, Zhou came to be known as “Qie Guevara” (窃格瓦拉) by his followers (qie means ‘to steal’ in Chinese), and thus he became a twisted online “spiritual leader”, and the subject of countless internet memes.

“The leader’s calling has shaken the exploitative nature of capitalism over the proletariat,” read a user post on Chinese Q&A platform Zhihu, with ‘leader’ referring of course to the misfit antihero. “Why do we want to contribute to capitalism? Screw it!” concludes the enormously upvoted post. 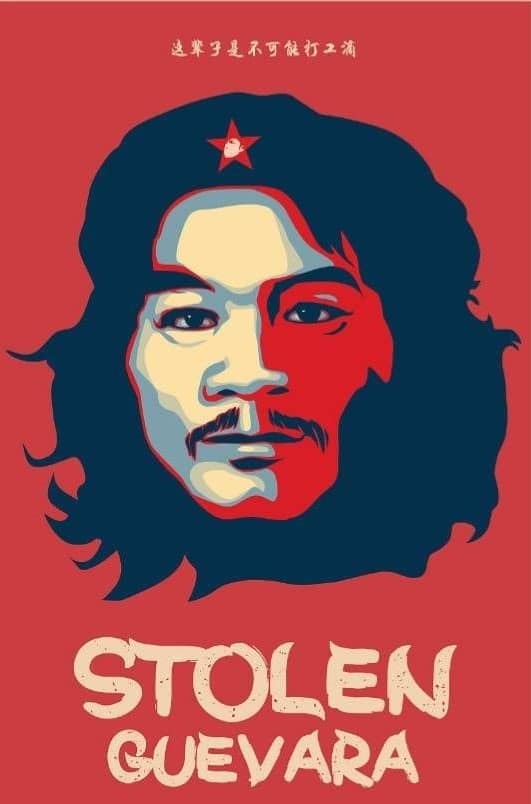 Following his initial release from prison, it didn’t take long for Zhou to revisit his old criminal ways, and he was met with a couple more arrests for the same crimes, eventually leading up to his latest arrest of electric bikes in 2016, from which he was released in April of this year. Online chants such as “Stand up, everyone! Leader is back!” were seen flooding forums on the Chinese web.

With each release and re-arrest, Zhou’s cult-like following only grew larger, perhaps because many found humor in the sequence of events, or perhaps because many others recognized his authenticity of practicing what he preached. As can be expected in the strange digital age of today, any individual with a large enough fanbase, regardless of the means of achieving it, can expect attention from the star-hungry social-media industry.

Online media agencies quickly built up dreams of turning the ragged man into an online live streaming celebrity, and so, turned up on the day of his release with ready-made contracts, some as high as 2 million RMB ($304,000 USD).

More than 30 companies have contacted his family in hopes of convincing Zhou to join the online live-streaming frenzy. Zhou, however, staying true to his ideals, rejected the lot, once again voicing his abhorrence of normative capitalist means of earning a living. In an interview with Red Star News, Zhou responded: “I’ve said it before: I won’t work for anyone. Signing a contract means I would become their employee”. Zhou then went on to express his dream of becoming a farmer; an occupation that is fulfilling in that no freedom is being taken away.

Unsurprisingly, Zhou’s strange saga into stardom was met with heavy controversy of both himself and his fans. Government and state-run media were quick to denounce the glorification of a convicted criminal, and went as far as to warn that talent agencies who approach Zhou are to be blacklisted. Some netizens also weren’t pleased with the strange following Zhou had gathered, and went on to comment on social media to voice their disappointment in society’s appraisal of a thief. 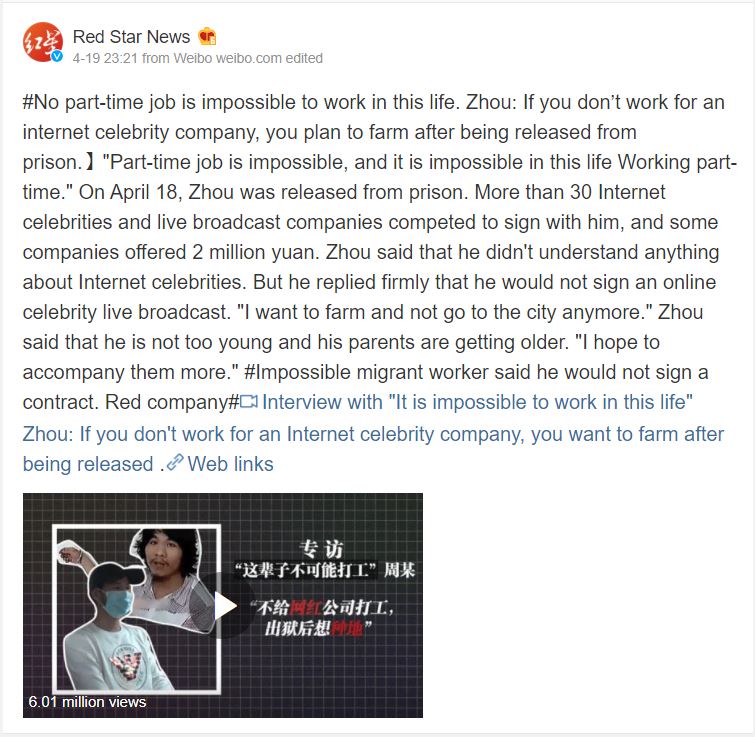 While Zhou’s brutal honesty was in no way a spark to a sleeping beast of anti-work sentiment, it did manage to tap into a growing movement of dissatisfied urbanites that is currently gaining momentum in the country. As is well known, China’s educational and employment terrain is one of the world’s harshest. The Chinese rat-race ethic, while clearly a huge contributor to the country’s unfathomable development, has been gaining increasing criticism from its tired participants.

Extremely demanding commitment, exhausting hours, and competition that can be just short of nerve-wracking, are felt in schools across the nation since a young age. Upon graduation, students find it next to impossible to find a high-enough paying job, and are forced to endure practically inhumane work-hours in low-paying jobs, leaving no time for personal life.

The last few years have seen a particular increase in the circulation of sarcastic memes equating tedious work with intense physical labor such as “brick moving”. Terms such as “overtime dogs” (jiaban gou; 加班狗), corporate cattle (shechu; 社畜), and brick-movers (ban zhuan; 搬砖) have become common shorthands for describing any occupation, from assembly-line blue-collar workers, to senior managers and executives, who all share the pain of doing mundane “labor”. 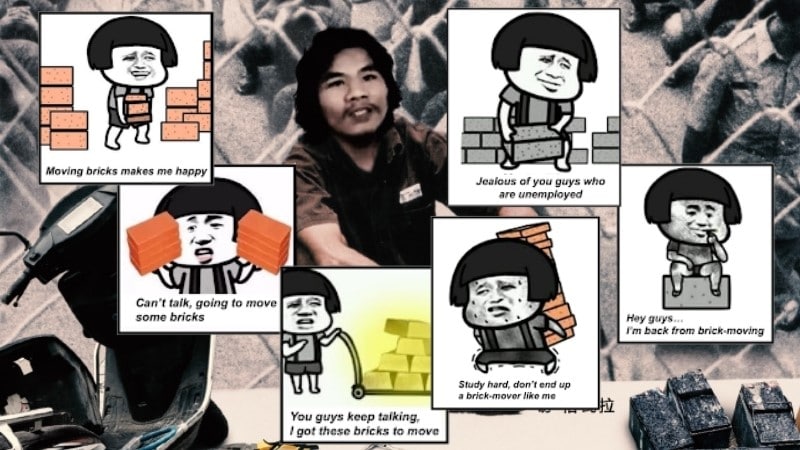 A recent resurfacing of a video-clip from an old Japanese cartoon has also gone viral with 2.2 million views, showing one of the main characters saying “Comfort is a luxury that belongs to the rich. Laborers, take heart!”. Since then, the term “laborers” (dagong ren; 打工人) , has also blown up, particularly coupled with the “take heart” phrase.

While many of these “ironic-optimism” memes may just be another internet-slang trend, they also do have clear undertones of judgement and dissent, that shine a light on a very prevalent issue. Perhaps one of the most interesting and obscure buzzwords to have made the ranks, is the term “involution” (neijuan; 内卷). This academic concept, which was first popularized by anthropologist Clifford Geertz, (specifically addressing agricultural processes), is now used by young Chinese people to explain the phenomenon of societal processes which were previously useful, now slowly becoming counterproductive by raising the overall standards against a fixed amount of resources, hence creating a self-perpetuating cycle.

The term, which has now taken on an entirely new meaning than the original agrarian one, basically describes the tipping point where a society’s combined diligence and effort collapses in on itself and diminishes productivity. This “backwards evolution” has become an accurate representation for many who are forced to bear the hardships of urban societal pressure, in a system that is believed to be designed to raise standards, intensify competition, and trap participants in an inescapable dead-end path. It is also believed to be the cause for today’s young Chinese adults’ disinterest in having kids and falling fertility rates. The collective apathy towards personal development, in a sense, has become a remedy for the intense anxiety felt.

Zhou has never intended to become the leader that he has, nor has he encouraged his followers to follow his reckless behavior. In a recent video from June of this year, the now 36-year-old is seen talking in a heartfelt video, expressing his remorse for being misunderstood, and encouraging his fans to lead a good and healthy life, and not to resort to crime like he has. Still, the emotions evoked within his followers appear to have stayed in some form.

Whether ‘Qie Guevara” and his followers are just another behind-the-screens worship trend, or whether the whole story has actually shed a light on a larger societal problem facing Chinese millennials and gen-Z’s, is hard to say. Given the increasingly complicated climate of China’s labor force, however, Zhou’s rise to fame came at the perfect time for his voice to be heard, and serve as a strange coping mechanism for many of China’s tired workers.