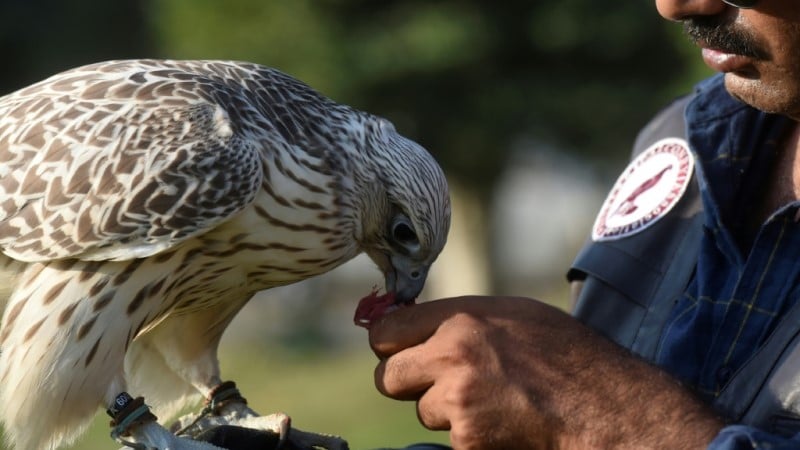 Demand for hunting falcons, largely from the Gulf, has fuelled a lucrative trade in poaching in Pakistan

Since learning to capture birds as a teen, Muhammad Rafiq has amassed a small fortune in Pakistan trapping and trafficking falcons — including some endangered species — for wealthy Gulf Arabs.

A single falcon can fetch up to tens of thousands of dollars on the black market, which allowed Rafiq to renovate his family home.

“Every season, dealers come from Karachi and leave their contacts with us, and we call them back if we catch something,” said the 32-year-old, from a nearby coastal village.

He recently trapped a peregrine falcon on a one-week hunting mission. 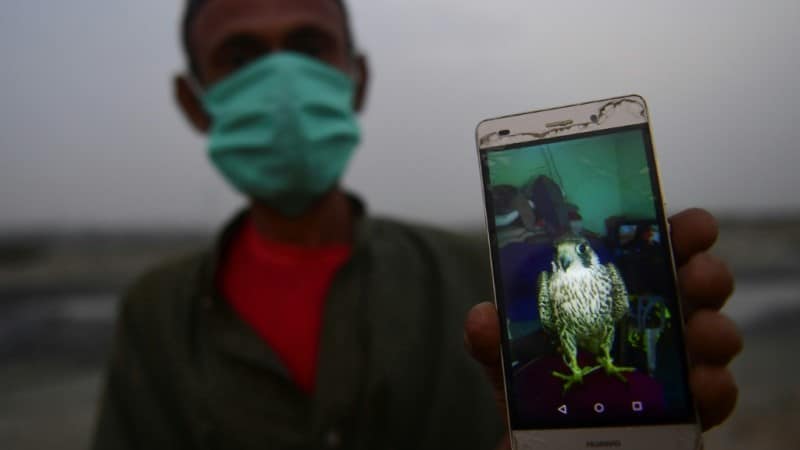 “I desperately needed money,” he told AFP. “And God has listened to me.”

For years, Pakistan has stood at the nexus of the falcon trade, both as a source of the birds of prey, and then as a destination to hunt with them.

Falcon poaching is officially banned, but demand for the birds is rising, according to the World Wildlife Fund in Pakistan.

It estimates that up to 700 falcons were illegally smuggled out of the country last year alone, often by organized criminal networks.

Their destination is normally Gulf countries, where falconry is a treasured tradition.

Owners treat the birds “like their own children”, said Margit Muller, the director of Abu Dhabi’s falcon hospital, which treats 11,000 falcons annually, a number that has more than doubled in the past 10 years.

One conservationist told AFP an Arab falconer usually owns around five to six hundred birds, most of which will be captured in the wild in Pakistan or Mongolia.

Wild birds are prized over those bred in captivity because they are believed to be better hunters, though there is no evidence to support those claims. 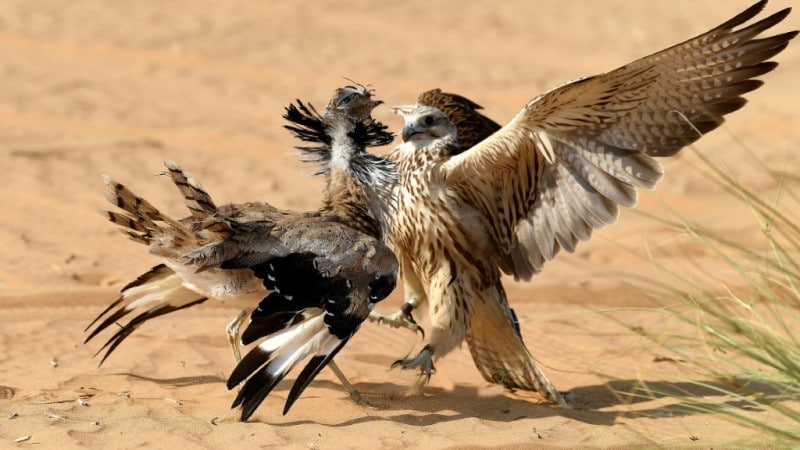 Falcons are used to hunt houbara bustards, a type of migratory bird

Pimps for the Gulf

Every winter, lavish hunting parties from the Gulf flock to Pakistan’s sprawling deserts, where they are given permits to use their falcons to hunt houbara bustards, a migratory bird wrongly prized as an aphrodisiac and classified as vulnerable by conservationists.

These excursions have cast a spotlight on the deep ties between Pakistan and its allies in the Gulf.

For decades, the Gulf states have propped up Islamabad’s ramshackle finances with generous loans, with one of the expectations being that they can continue to use Pakistan as a hunting playground. 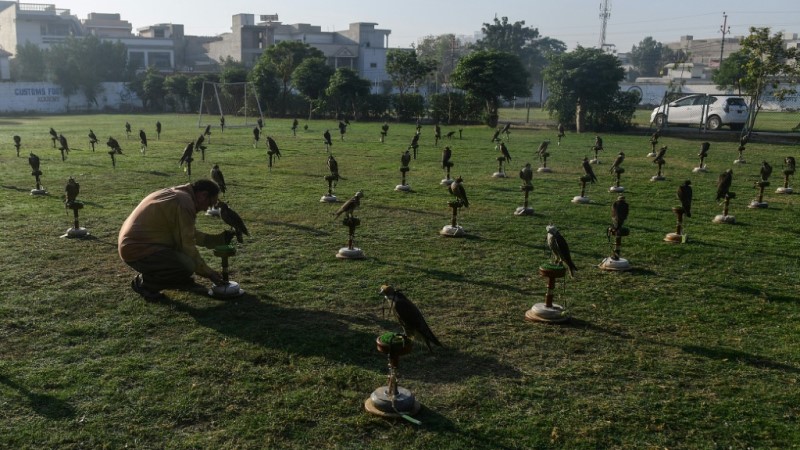 Saudi Crown Prince Mohammed bin Salman and two other royals were granted permission to catch bustards by Prime Minister Imran Khan’s government in December last year, a soft diplomacy tactic that Khan had openly disagreed with when he was in the opposition.

The government also presents falcons as gifts to world leaders.

“Our officials are working like pimps for the Arabs,” a government official requesting anonymity told AFP.

A brief ban on the bustard hunts was overturned in 2016 by the Supreme Court, but conservationists are now pushing for the export of falcons to be regulated in an ongoing case at the Islamabad High Court. 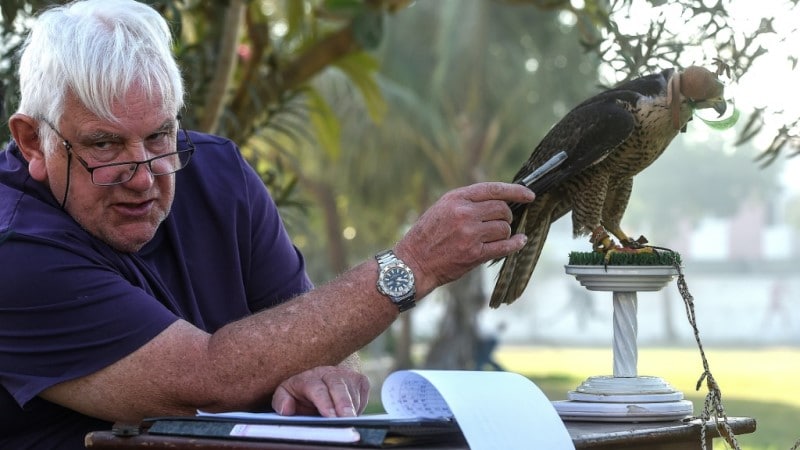 Every year, falcons escape the harsh Siberian winter and fly thousands of miles to warmer regions, including southern Pakistan.

During the migratory season, wildlife traffickers descend on villages along the Arabian Sea coastline, offering fishermen cash to briefly abandon their boats and try their hand at poaching.

“We pay them in advance, send food to their families and if they catch a bird that is precious, we happily give them motorbikes,” said one trafficker who spoke to AFP on the condition of anonymity.

A range of tactics can be employed — sticky liquids, net traps or, most commonly, using smaller birds as bait. 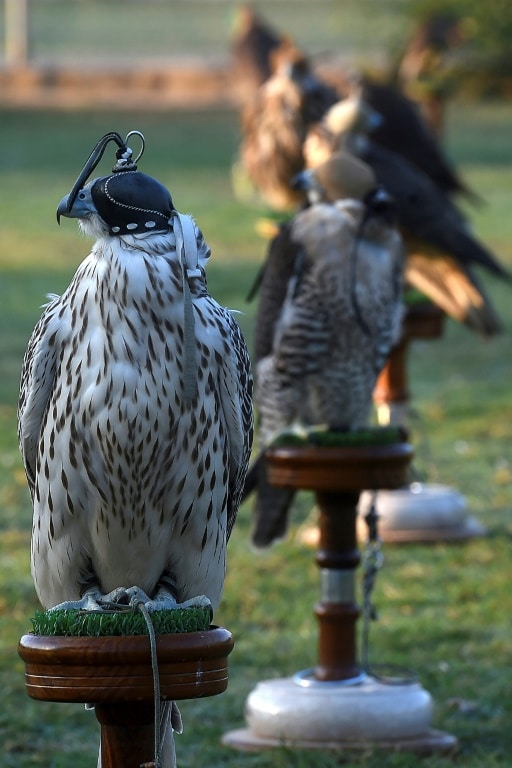 Poachers especially target the peregrine falcon, whose populations remain stable — but also the saker, which is endangered.

Bob Dalton, a veteran falcon conservationist, helped oversee the rehabilitation of dozens of falcons seized by Pakistani authorities in October, with officials estimating the cache to be worth well over $1 million.

“The illegal trade is growing, there is more money being spent, more pursuit from the Gulf,” he told AFP.

“With the exception of one or two species, most falcon populations are in decline or on the point of being unstable.” 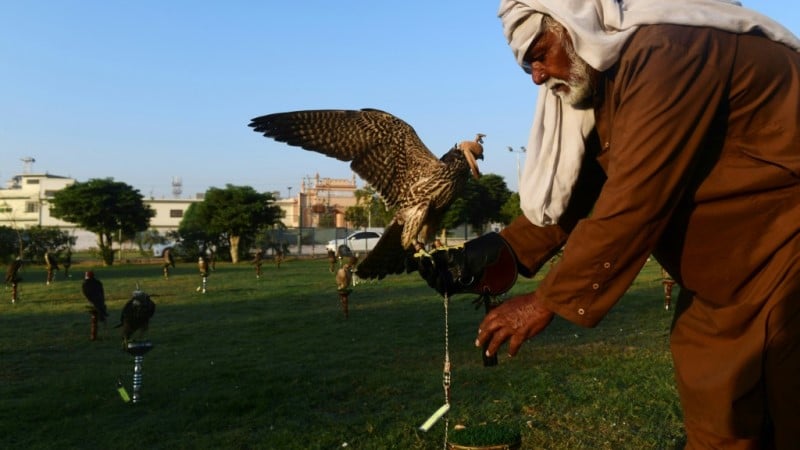 With ongoing efforts to curtail rampant poaching failing, some officials in Pakistan have suggested regulating the falcon trapping market, inspired by a scheme involving another rare native species, the markhor — an elusive mountain goat with striking twisted horns found in Pakistan’s mountainous north.

Every year, foreigners shell out tens of thousands of dollars for a handful of trophy hunting permits, providing a financial incentive for communities to prevent poaching.

Naeem Ashraf Raja, the director of biodiversity at the ministry of climate change, said markhor numbers have rebounded as a result of this controversial conservation method.

With hunting parties set to descend on Pakistan again over the next few months, Kamran Khan Yousafzai, the president of Pakistan’s Falconry Association, said the country desperately needs to implement a sustainable wildlife programme.

“Arab falconers can’t resist coming to Pakistan. They have been coming to these hunting grounds for generations, and unless they face any real problems, they are not going to search for new destinations.”