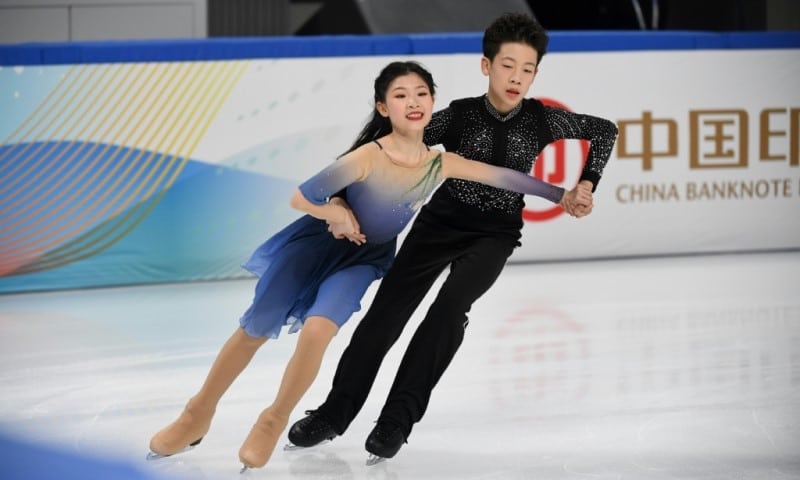 Participants compete in a figure skating test event for the 2022 Beijing Winter Olympic Games at the Capital Indoor Stadium in Beijing on April 3, 2021

The United States Olympic and Paralympic Committee (USOPC) stated its opposition to a boycott of the 2022 Beijing Winter Olympics on Wednesday, saying athletes should not be used as “political pawns.”

In remarks to reporters ahead of a US Olympic team media event, USOPC president Susanne Lyons said the organisation firmly believed that boycotts were ineffective.

“We at the USOPC oppose athlete boycotts because they’ve been shown to negatively impact athletes while not effectively addressing global issues,” Lyons said.

“For our athletes, their only dream is to represent the USA and what we stand for on the international field of play.

“We do not believe that Team USA’s young athletes should be used as political pawns.”

The Beijing Winter Games are scheduled to begin on February 4 next year, six months after the summer Tokyo Olympics.

China is facing global scrutiny over a range of issues, notably the mass internment of Uighur Muslims in the western region of Xinjiang, which the US has said amounts to genocide.

It is also under pressure for its rights clampdown in the former British colony of Hong Kong.

On Tuesday, US State Department spokesman Ned Price was asked if the United States would consider a joint boycott with allies and said it was “something that we certainly wish to discuss.”

But he later stressed that the United States does not “have any announcement regarding the Beijing Olympics,” writing on Twitter that “we will continue to consult closely with allies and partners to define our common concerns and establish our shared approach.”

China, which has rejected criticism of its human rights record, on Wednesday hit back at suggestions of a boycott, accusing the United States of “politicizing sports”.

USOPC chief president Lyons acknowledged the human rights issues in China, but said the issue was best dealt with on a government level.

“We certainly do not want to minimise the serious human rights issues that are happening in China,” Lyons said.

“But the US has many tools to constructively respond to these concerns which we believe should be handled by government officials.”

Calls for a US boycott of the Olympics have escalated in recent months, with mostly Republican lawmakers leading criticism of China.

Former US Secretary of State Mike Pompeo and former United Nations ambassador Nikki Haley have both said the US should boycott the games while in February a group of US senators introduced a resolution seeking to strip the games from China.

A coalition of 180 rights organizations has also called for a boycott.

The International Olympic Committee meanwhile has criticized talk of a boycott, with IOC chief Thomas Bach pointing to the example of the 1980 US-led boycott of the Moscow Olympics in the wake of the Soviet Union’s invasion of Afghanistan.

“People must learn from history,” Bach said last month. “The boycott of the Olympic Games has never achieved anything.”