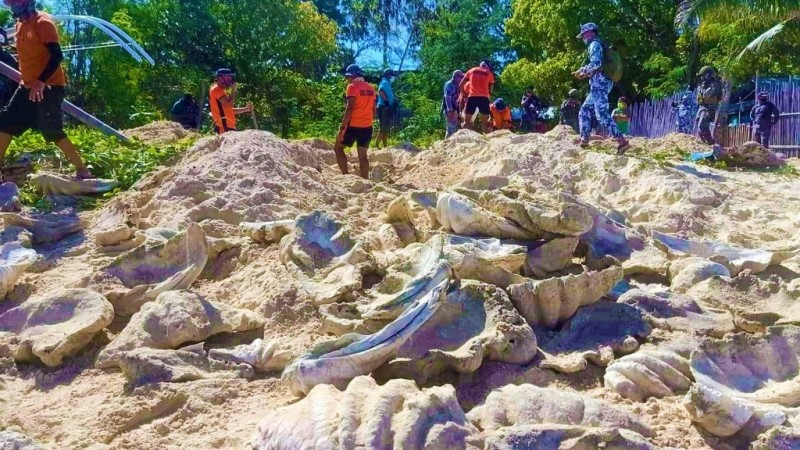 Philippine authorities said Saturday they have seized some 200 tons of illegally harvested giant clam shells worth nearly $25 million in one of the biggest known operations of its kind in the country.

Conservationists have expressed alarm over the surging illicit trade in the endangered creatures, which are used as a substitute for ivory following a global crackdown in the trade of elephant tusks.

The Philippines is home to most of the world’s giant tropical clam species, and Friday’s raid took place in the western province of Palawan, considered a poaching hotbed.

The coastguard said four suspects were arrested on the remote Green Island in the Sulu Sea that turned up the largest ever giant clam shell haul by law enforcers in the area.

“Taking the giant clams from their natural habitat is a form of inter-generational crime,” Jovic Fabello, spokesman for the Palawan Council for Sustainable Development told AFP.

“It will permanently affect the marine ecosystem and future generations will be deprived of the benefits accruing from it,” he added.

He said the seized shells included those of the Tridacna gigas, the world’s largest clam.

Growing up to 1.3 metres (4.5 feet) wide and weighing up to 250 kilogrammes (550 pounds), these host marine algae which are a basic food source for many of the fish species consumed by humans.

Conservationists say giant clam shells are used as an alternative material for products ranging from earrings to chandeliers as ivory becomes scarce.

Fabello said the illegal trade in giant clams has been growing in Palawan and several other areas of the Philippines in the past three years.

Killing endangered species is punishable by up to 12 years in prison and fines of up to a million pesos under the country’s wildlife protection act.

“These people are digging up giant clams and killing them,” Fabello alleged.

The coast guard estimated the value of the latest haul at 1.2 billion pesos ($24.8 million).

It dwarfed the previous Palawan record of 80 tons of giant clam shells worth $3.3 million that were seized early last month from Johnson Island, also near the venue of Friday’s raid.