Rodrigo Duterte: A Not So Typical Philippine President 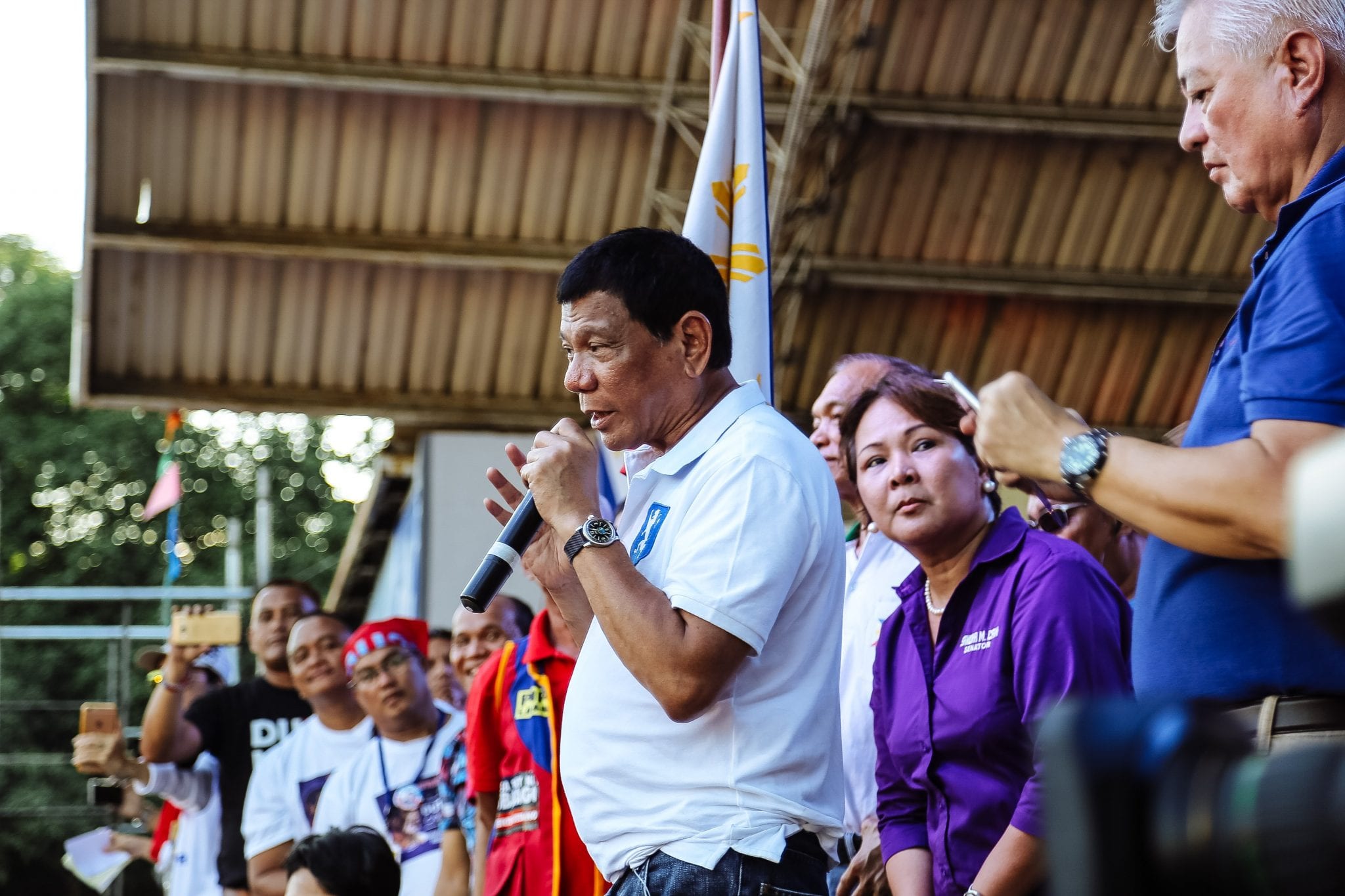 Unlike his predecessors, Rodrigo “The Punisher” Duterte is a known enemy of the US government, UNCHR, and Catholic Church yet he holds the highest trust rating among Filipino presidents.

Rodrigo “Digong” Roa Duterte is currently and sixteenth President of the Philippines. He was born in March 28, 1945 in In Maasin, Leyte but his family moved to Davao when he was little.

Although he became a lawyer, he was not doing so well in high school. In fact, he was expelled twice for unruly behavior.

The young Duterte enjoyed hanging around tough guys in their city (maybe that’s where he got his vocabulary and mannerism) even if he was whipped by his mother for doing so. Apparently, his experience on the streets paid off because he was able to win the hearts of the masses.

After finally finishing his secondary education at Holy Cross College (now Cor Jesu College) in Digos. He was sent to Manila to study Bachelor of Arts in Political Science in Lyceum of the Philippines University and graduated in 1968. After earning his degree, he entered San Beda College of Law and graduated in 1972. He then took and passed the bar examination that same year.

Duterte went back to Davao City and started his career at Davao City bar. He was serving as the Second Assistant City Prosecutor when he was appointed as Davao City’s Officer-in-charge Vice Mayor. He eventually became the City’s longest-serving mayor having served for more than 22 years.

Although he was born into a politically active family, he claimed he never dreamed of becoming a mayor. He was also hesitant to run for the post of president, but eventually agreed after her daughter Sara shaved her head as protest.

Rape Jokes – A few months ago, Duterte said that there are many beautiful women in Davao City, that’s why there are many rape cases there. It wasn’t the first time he made joke about rape, during the campaign period in 2016 he also joked about an Australian missionary who was held hostage and raped, her throat was slashed before being shot. Duterte said that the mayor should have been the first to rape her because she was beautiful. Women’s rights advocates and other groups berated him for those statements, however not many people know that during his tenure he introduced women’s rights bill that aimed to eliminate discrimination against women and promote their rights.

Marijuana Use – Just this month, Duterte again made a “joke” which stirred criticism. Duterte said that because of his busy schedules, he is using marijuana to keep himself awake. Presidential Spokesperson Salvador Panelo however explained that if there is no logic, it’s a joke. Explaining that Marijuana is not a stimulant to keep you awake, but has the opposite effect.

Other jokes which became controversial includes; making Philippines a Province of China, his attacks on the Catholic Church, among others.

The most controversial statement he said however is, ‘My only sin are extrajudicial killings.’

Back in 2014, Duterte have started to push for a change of government form to federalism. An advocacy he had carried during the campaign period and what he have been working to accomplish during his term. However, after the controversies faced by former Communications Under Secretary Mocha Uson, the president seemed to have lowered his stance.

“I hate drugs!” That is the most famous statement from Duterte. Ever since he became the mayor a Davao City, Duterte have been very clear about that. His war on drugs is one of his most significant work as a mayor. He succeeded in eradicating menace and made their city free from drugs. He likewise used city funds for drug rehabilitation and treatment center, and in 2003 he proposed to give P2,000 to who would personally approach him and promise to change. However, many accuse him of human rights violations and extra judicial killings because of his ruthless eradication of criminals. Thus, Times Magazine dubbed him as ‘The Punisher.’

During the campaign period, Duterte promised to bring the Philippines flag to the disputed Spratlys island and erect it there. Duterte vowed that if elected president, he’d make sure the United Nations Tribunal votes in favor of the Philippines claim on the Spratlys which has been taken over by China. Or else his administration would not honor it’s adverse decision like China has declared. However, he later retracted his vow citing friendship with China.

During his first year as president, Duterte has been accused of massive human rights violations because of his war on drugs and anomalies while he was still a mayor of Davao City.

Senator Antonio Trillanes IV filed a complaint for plunder and violation of the Anti-Graft Law against Duterte whom he accused of hiring ghost employees at the Davao City Hall when he was mayor.

While Magdalo party-list Representative Gary Alejano filed an impeachment complaint against Duterte on the issue of extra-judicial killings and allegedly amassing more than P2-billion ill-gotten wealth. The complaint was dismissed by the congress.

Both legislators also filed a complaint at the International Criminal Court (ICC) in The Hague asking the tribunal to investigate Duterte’s bloody campaign against illegal drugs.

Aside from being dubbed as “The Punisher,” Duterte was once again featured on Time Magazine being one of the “Strongmen in an article: ‘Strongmen Era’ Is Here. Here’s What It Means for You. Duterte appeared on the cover along with Hungarian Prime Minister Viktor Orban, President of Turkey Recep Tayyip Erdogan, and Russian President Vladimir Putin.

Duterte Vs. the United States

Unlike his predecessors, Duterte is not being so friendly with the United States Government. He even called President Barack Obama a son of a whore. Instead, he had befriended Russia and China which is considered as enemy by the US. He did not allow military exercises in the disputed islands and instead of buying military equipments from America, he ordered from Russia. Duterte also claimed that the US Central Intelligence is out to kill him. “If my helicopter blows up, it’s them,” he said.

Duterte has vowed to move closer to China and Russia, and farther from the United States because of allegedly interfering in his bloody drug war.

Duterte who cursed the Pope because of the heavy traffic in Manila claimed that he was sexually abused, that must explain his rebellious behaviour back in highschool. Another reason is because the Catholic church and human rights activists strongly opposes his campaign against drugs.

Aside from the US, the Philippine President is also unfriendly towards the U.N human rights Council. He even told Diego García-Sayán, special U.N rapporteur to ‘go to hell’, warning against interference in domestic affairs.

UN chief said the president needs psychiatric evaluation after UN special rapporteur on the rights of indigenous peoples, Victoria Tauli-Corpuz was listed as one of more than 600 people it wanted to be categorised as rebels for “using acts of terror” to undermine the government.

Duterte even called the organisation “stupid” and “shit”.

Duterte may not sound appealing to the UN or US but at the end of the day, it is the voice of his people that matters. Based on the latest Social Weather Stations (SWS) survey released on October 27, 2018, 74% of adult Filipinos have trust in Duterte, while 14% are undecided and 12% have little.

He still remains to have the highest trust rating which means majority of the Filipino people supports his programs, including his war on drugs and the Martial Law in Mindanao.

That is despite him not making true to his promise during the campaign. Some of his unfulfilled promises include; eradicating drugs in the country with in six months of his term, planting Philippines’ flag in the disputed islands and his promise to God not to cuss anymore, vowing “Not (to) express slang, cuss words and everything. So you guys hear me right always because (a) promise to God is a promise to the Filipino people.”