China’s Social Credit System: It Pays to be Good

While the West thinks it’s close to becoming an Orwellian society, for the Chinese, it’s about building a culture of trust and making their country a better place to live.

The Human Rights Watch called it “chilling,” the Western media likened it to George Orwell’s dystopic world in “1984,” while Western politicians thought it could be a way for the Chinese government to virtually control the lives of its citizens. Meanwhile, the Chinese people think it’s helping them bring out  versions of themselves.

What exactly is China’s “social credit system” all about? And why is the rest of the world throwing a fit around the issue? 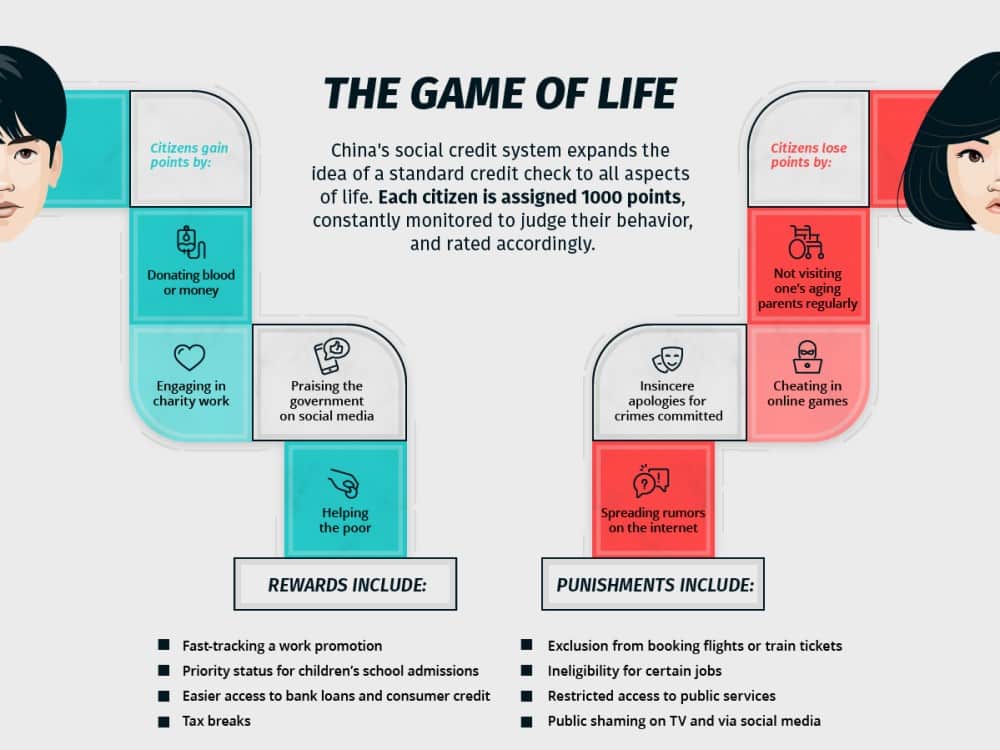 Who’s Been Naughty or Nice?

In 2014, the Chinese government under the administration of current President Xi  an initiative to establish a national reputation system that intends to assess a person’s business, economic, and social reputation – collectively known as “credit.” The government intends to make it go fully operational nationwide by the year 2020.

In a nutshell: the program, which is now popularly known as Social Credit System, is a tool for the government to grade each Chinese individual based on the several aspects of one’s social and personal life. The grade incurred will reflect how good or bad that person behaved in the community. As you might expect, people can be rewarded for their good behavior or otherwise, be punished for bad actions.

The use of the word “credit” in the term makes it a bit confusing. To wit: a credit rating, as a term used in banking and commerce systems, helps determine whether you can lend someone some money and get it back plus interest. Let’s extend this concept to social spheres, and we get this idea of a scoring system that will measure up your worthiness to avail or gain access on the different products and services provided for by the community.

For instance, if a citizen is caught smoking in a No Smoking zone, this would be considered bad  which negatively affects his/her credit. Low scoring civilians may suffer having restricted internet access, difficulty in purchasing real estate properties, limited access to public utilities, and getting banned from traveling, just to mention a few. Worst kinds of penalties may include restricted educational opportunities for you and your family or even the loss of employment.

On the other hand, high credit-scoring people will not only get to enjoy these basic necessities but will also be awarded  perks like discounts on utility bills and their government applications getting prioritized.

For the Chinese, keeping trust is a virtue, and breaking it is a sin. This is the exact piece of ideology that serves as the guiding thread of this initiative, as outlined in a 2014 government document.

Let’s put it in mind that as the Chinese economy took off in recent decades, the people’s living standards improved as well. But alongside with progress comes the growth and proliferation of new crimes like fraud and other technology-driven economic misconducts.

Aside from this, the world’s second-largest economy has also been dealing with rampant corruption within the ranks of its government offices. In the private sector, we have financial scams as well as corporate scandals.

The social credit system then is China’s solution to raise standards and promote good moral behavior among its people. Restoring trust means upholding even to the most basic of laws which, unfortunately, are often ignored or broken. 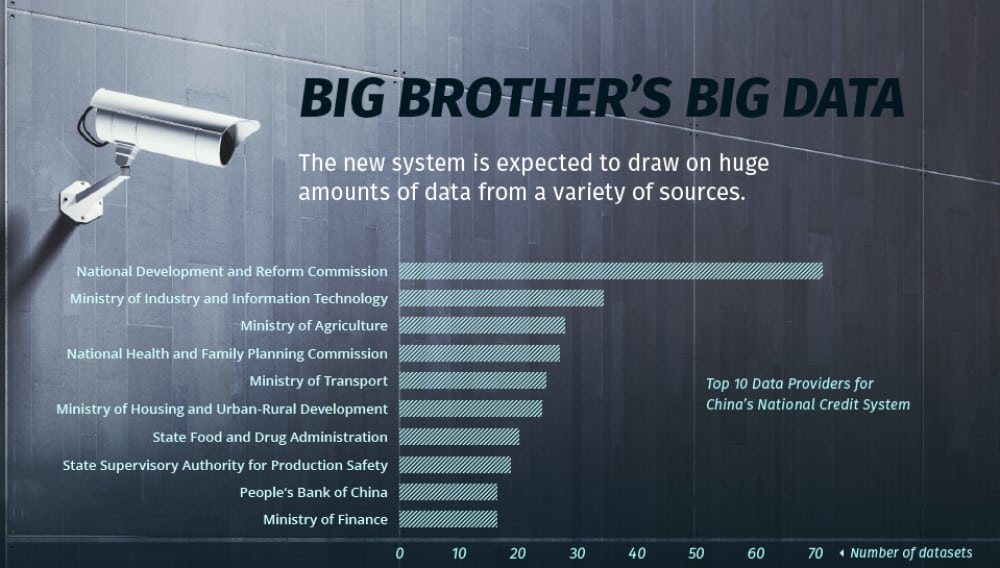 How Does the Social Credit System Work?

According to an NPR report, every citizen starts off with a perfect score of 1,000. It is his/her duty to uphold or prevent any loss of this credit score.

Although the program is intended for nationwide implementation, there’s not one absolute way on how to enact the policy. It varies from place to place and local/regional government units can chime in their own set of mechanics tailored fit for their community.

For example, in the city of Hangzhou, the capital of China’s Zhejiang province, the council gives credit scores to pro-social activities like donating blood and doing voluntary community work.

In Yiwu, one of China’s densely populated trading centers, the ruling bodies recognize humanitarian acts such as giving care and support for the elderly.

Other things that could help improve one’s social score include paying bills on time, patronizing Chinese-made products, establishing connections with other high credit scorers, making donations to charities, and more others.

Common infractions such as bad driving, jaywalking, not paying debts, refusing to carry out compulsory military service in schools, spending too much time on video games, and even proliferating fake news on social media, etc. can lower a person’s credit score. 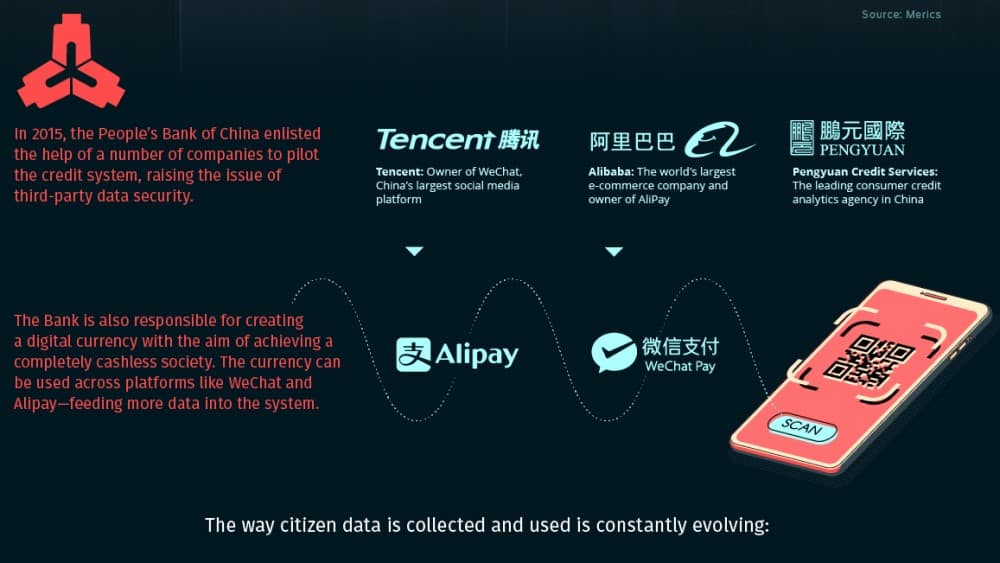 What is its Current Status?

Beta versions of the system are now being tested in more than a dozen cities nationwide. Each of these pilot scoring programs follows different types of grading systems but they are all based on four distinct segments prescribed in the blueprint. These are:

The purpose of running these trial schemes is to identify and explore the boundaries of the system before it transcends to a national level.

What are Its Pros and Cons?

The immediate advantage of the Social Credit System to the Chinese society would be for the government to easily identify and monitor deviant acts of its constituents. By harnessing the power of technology (social media, mobile payment systems, , etc.) the country would be able to ensure that the law-abiding citizens are protected from those who belong to the opposite side of the scale.

The people themselves view the system rather . A lot showed support to the program as they see it as a means to promote good morals in society.

Regardless, there are still questions being raised against this policy. One of the main concerns coming especially from the international community is the possibility for the system to be used as a mass surveillance tool which is a direct violation of personal privacy. There’s also the fear of how it could give the government too much power over the lives of its people.

Does it Ring Any Bells?

Observers are often quick to pick out on these supposed negative sides of China’s social credit system. It’s understandable, in a way, since outsiders are mostly given with a biased view on how the country’s authoritarian society works.

However, the West (and the rest of the globe) may have overlooked the fact that this system is actually based on the very same credit scoring concept that has been used for a very long time around the world.

Sure, social behaviors like texting while driving doesn’t factor into US credit scores, for example, but it works in the same vein, such that a person’s financial history directly correlates to his/her trustworthiness. This factor alone could affect an individual’s quality of life in America.

Clearly, China’s Social Credit System is still a diamond on the rough and it has its own share of issues that need to be addressed. But for all intents and purposes, there’s more to the system than what the Western world’s hysterical vision of a dystopian society suggests.