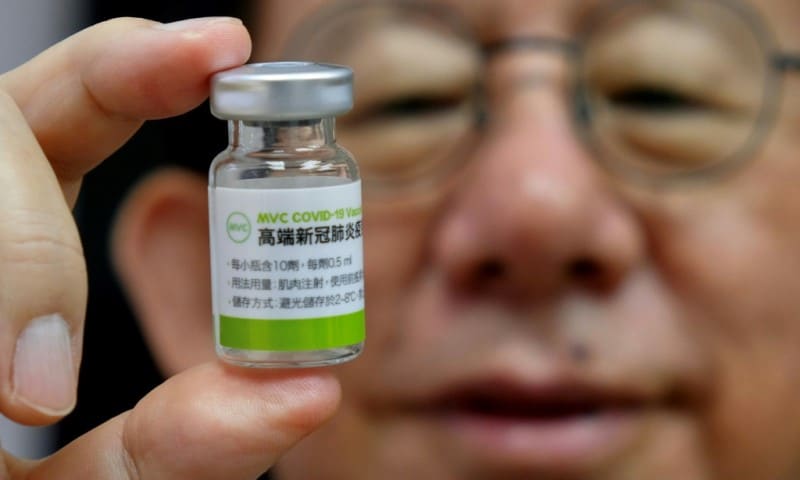 Charles Chen, CEO of Medigen, with a vaccine sample

Taiwan’s government on Monday said it had granted emergency-use approval to a coronavirus vaccine made locally by Medigen, with experts saying early data suggested it was similarly effective to AstraZeneca’s jabs.

The decision is a boost for the island, which has struggled to secure enough vaccines for its 23 million people.

Taiwan’s health ministry said a panel of experts approved its use on Sunday and that the first inoculations for the public could begin as early as August.

No details were given of its efficacy rate but the health ministry said Medigen’s antibody effect was “no worse than the Oxford-AstraZeneca vaccine jabs that the public have received”.

“There are no major safety concerns,” the ministry added.

Health minister Chen Shih-chung said “it will take some time to expand production capacity” but said the first small supplies for the public could be expected in August.

Medigen’s offering is a “subunit vaccine” which teaches the body’s immune system to recognize the spike protein that the coronavirus uses to invade cells.

It will be given to people over 20 years old in two shots.

Medigen has been told to submit monthly safety monitoring reports and an effectiveness report within a year, the health ministry added.

Taiwan’s government has signed contracts to purchase five million doses of the Medigen vaccine and the same amount from another local maker, United Biomedical, which has yet to receive emergency authorisation.

Taiwan was lauded last year for having one of the best coronavirus responses in the world, stifling its initial outbreak and keeping the virus at bay for nearly a year with strict quarantine controls and world-class contract tracing.

But an outbreak that began in May among airline pilots has since led to widespread community transmission with the island now recording nearly 800 deaths and some 15,000 infections.

It had only received 726,000 vaccine doses before the United States and Japan recently donated 2.5 million and 3.37 million doses, respectively.

Taipei has accused Beijing of hampering its plans to acquire Pfizer-BioNTech vaccines from Germany’s BioNTech, until two Taiwanese tech giants reached an agreement with its Shanghai-based distributor.

Foxconn and Taiwan Semiconductor Manufacturing Company, the world’s largest contract microchip maker, announced last week that they would each donate 5 million vaccines doses to the government, after signing a deal with Fosun Pharma.

But it will still need more jabs to fully innoculate its 23 million people.