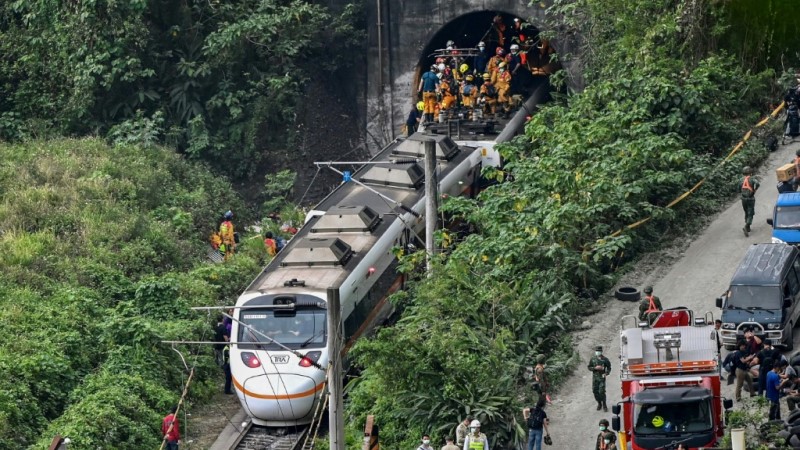 Survivors of Taiwan’s worst rail crash in decades have recounted their desperate efforts to find loved ones in the twisted wreckage of the train at what should have been the start of a holiday weekend.

Friday’s crash, which killed at least 50 people and injured more than 170, was caused by a collision with a vehicle that slipped onto the tracks just as the train went into a narrow tunnel near the eastern coastal city of Hualien.

Many passengers were heading to their home towns to tidy the graves of their ancestors at the start of the annual four-day Tomb Sweeping Festival.

Instead, fresh graves are now being prepared for their loved ones. 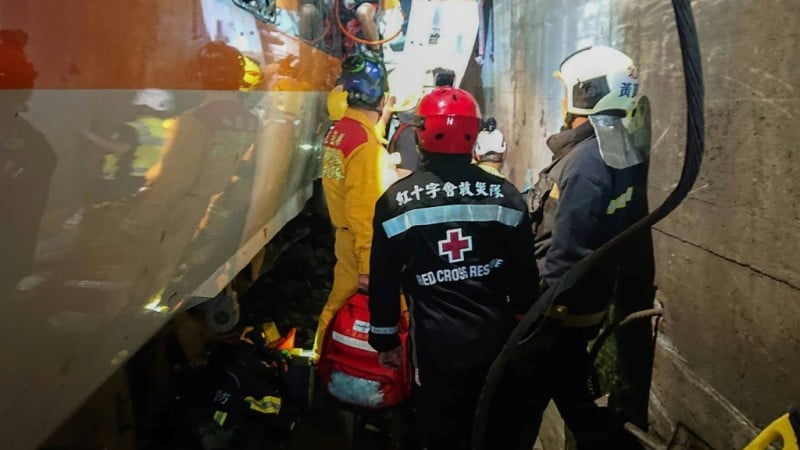 Passengers gave harrowing testimony of making their way out of the train, half of which was lodged inside the narrow tunnel

Chung Hui-mei was the sole survivor of a family of four.

Because the train was so full, she found a seat away from her family and was not next to them at the time of the crash, she said.

She recalled her horror at coming across the lifeless bodies of her husband and son as she tried in vain to get to her daughter.

“I tried to find them, my husband was sitting at the front of the eighth carriage,” she told the Liberty Times newspaper at a mortuary in Hualien, bandages covering wounds on her forehead and an arm.

Chung said she called out for her daughter and heard her reply just once. But after that, silence.

Officials said nearly 500 people were on the train — 372 seated and a further 120 standing in the aisles.

Chung said the train did not seem to reduce speed before the crash.

“The conductor started honking early and he knew there was some situation ahead but he didn’t slow down,” she said. “He was driving fast until the train hit the tunnel.”

The train conductor and two other railway staff were among those killed, according to authorities.

The youngest victim listed so far was six years old.

Speaking from a wheelchair in hospital, a woman surnamed Yang told Era TV she and her husband were standing in the area connecting two carriages when the train derailed. 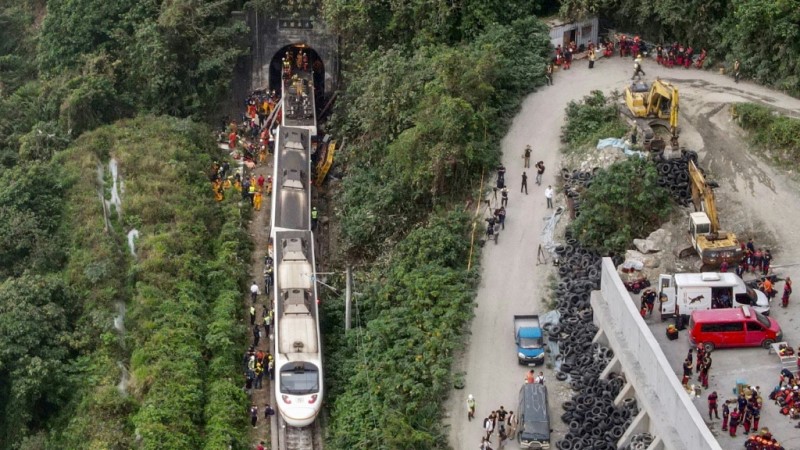 The crash, which killed at least 50 people and injured more than 170, was caused by a collision with a vehicle that slipped onto the tracks just as the train went into a narrow tunnel near the eastern coastal city of Hualien

“I didn’t come to hospital right away because my husband died at the scene,” she said.

She recalled being thrust forward by the force of the crash and said she believed her husband cushioned the impact for her.

“I felt dazed at the time,” she said. “I grabbed hold of him but he passed away.”

Others gave harrowing testimony of making their way out of the train, half of which was lodged inside the narrow tunnel.

“I saw bodies and body parts all over the place. It’s really devastating,” a man surnamed Lo told the Apple Daily newspaper. 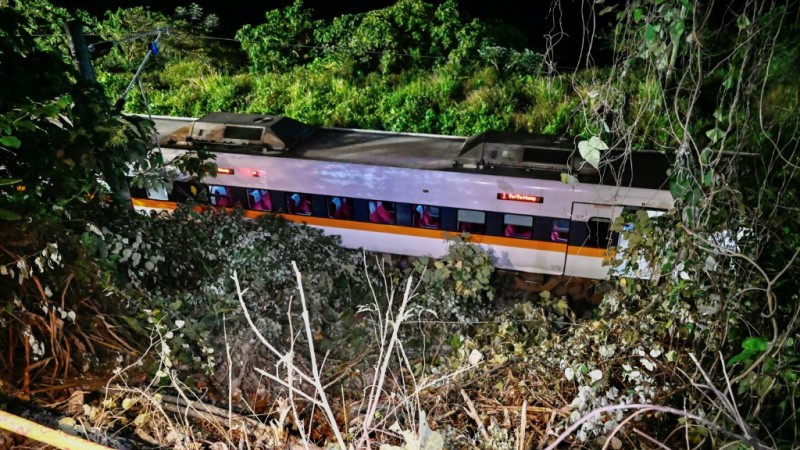 Rescuers used metal cutters to get to some carriages

“I had to climb over several bodies to get out of the carriage through a crack of the door. I was scared to death,” another unidentified woman told Apple.

Pictures showed survivors using mobile phone lights to make their way along the side of the blacked-out train. Others walked along the roof.

Rescuers also used metal cutters to get to some carriages.

The back half of the train appeared undamaged and many in that section walked away unscathed.

Officials have warned that the official death toll could rise because some body parts have yet to be properly identified. Some victims may also still be inside the wreckage.

Chang Zi-chen, a member of Hualien Search and Rescue, told reporters the front carriage had been virtually split in half.

“Our personnel couldn’t get rescue equipment to them because of the difficult access,” he said.

“We could only send in medical supplies to help the patients’ survival chances.”

Friday’s crash looks set to be one of Taiwan’s worst railway accidents on record.

The last major train derailment in Taiwan was in 2018 and left 18 people dead on the same eastern line.

The island’s deadliest rail disaster was in 1948 when a train caught fire and 64 people perished.

by Sean Chang with Amber Wang