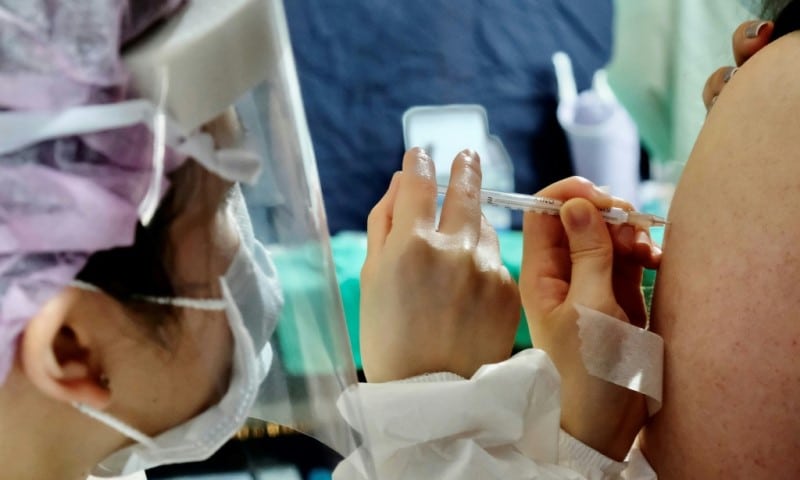 Taiwanese tech giants Foxconn and Taiwan Semiconductor Manufacturing Company announced Monday they will each donate five million coronavirus vaccine doses to the government in a deal with a China-based distributor.

Taipei has been struggling to secure enough vaccines for its population, and its precarious political status has been a major stumbling block.

As Taipei and Beijing accused each other of hampering vaccine deals, Foxconn and TSMC stepped in with a face-saving solution — buying Pfizer-BioNTech doses from a Chinese distributor and donating them to Taiwan.

“Me and my team feel the public anxiety and expectations on the vaccines and we are relieved to give the public an answer that relevant contracts have been signed,” Foxconn founder Terry Gou said in a post on his Facebook page.

“Beijing authorities have not offered any guidance or interfered with the vaccine acquisition process,” he said, adding that the vaccines will be shipped directly by German firm BioNTech.

Foxconn and TSMC, the world’s largest contract electronics and chip makers respectively, said they will spend $175 million each on the vaccines.

Beijing’s authoritarian leadership views democratic self-ruled Taiwan as part of China’s territory and has vowed to one day seize the island, by force if needed.

China tries to keep Taiwan internationally isolated, including blocking it from the World Health Organization.

Taipei has been trying to secure Pfizer-BioNTech direct from Germany but Shanghai-based Fosun Pharma has the distribution rights for China, Hong Kong, Macau and Taiwan.

Attempts to sign a direct deal made little headway, something Taiwan blamed on Beijing.

In return, Beijing has accused Taiwan of refusing to deal with Fosun Pharma and politicizing its vaccine search.

Fosun issued a statement late Sunday saying it had signed a deal with the Taiwanese firms to sell 10 million shots, to be donated to “disease control institutions in the Taiwan region”.

In an interview with China’s Global Times — a state-run tabloid — Fosun Chairman and CEO Wu Yifang accused Taipei of “rule-breaking in the whole process”. No further elaboration was provided.

Taiwan had only received 726,000 vaccine doses before the United States and Japan recently donated 2.5 million and 2.37 million doses, respectively.

So far, just 14 percent of its 23.5 million people have been vaccinated, according to the health ministry.

Health Minister Chen Shih-chung previously revealed that Taiwan and BioNTech were about to finalise a deal in January when the company suggested the words “our country” had to be taken out of a Taiwanese press statement.

Chen said authorities agreed to replace it with “Taiwan” but the deal remained stalled.

The Chinese government reacts angrily at any attempts to recognise Taiwan as an independent nation.

After the Foxconn-TSMC deal was announced Monday, BioNTech released a statement confirming the sale to the companies and the subsequent donation to “the Taiwan region for local vaccination“.