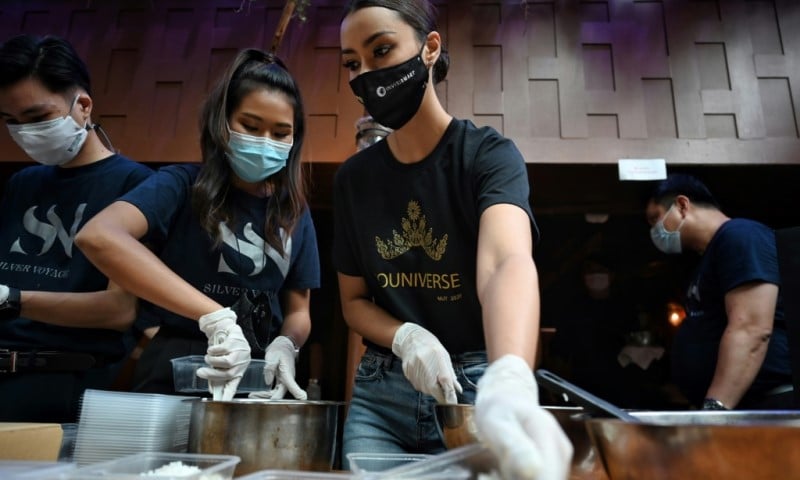 Thailand is battling a third wave of coronavirus

Surrounded by children in a Bangkok slum, Miss Universe Thailand handed out lunch boxes prepared by Michelin-starred chefs on Monday — a project to help some of the capital’s worst Covid-hit communities.

The kingdom is currently battling a third wave of coronavirus — an outbreak that authorities traced in April to a nightlife district frequented by Bangkok’s uber-rich and politically connected.

The government slapped restrictions on businesses and public spaces — much to the chagrin of restaurants already battered by a year of on-off pandemic shutdowns.

Even Michelin-starred ventures are feeling the brunt, and concierge company The Silver Voyage Club is working to bring their ultra-luxe meals to some of Bangkok’s hardest-hit communities, said founder Jakkapun Rattanapet.

Part of the “Food for Fighters” project, Bangkok’s world-class chefs are paid up to 100 baht ($3.20) per lunch box — which are then donated to communities where high rates of clusters have emerged.

Khlong Toei — Bangkok’s largest slum — has emerged in this third wave as a hotspot, because most of its working-class residents are not able to social distance or work from home.

The Kite is Going Down

“We need to get rid of that (inequality) gap because there are so many people still struggling while the rest are living an elite life,” she told AFP, in between taking selfies with fans.

“I’m very grateful to be here,” she said. “I hope they enjoy what they receive today.”

Among the offerings was pasta with a spicy tom yum chicken flavor, said chef Thaninthorn “Noom” Chantrawan — who heads the Michelin-starred restaurant Chim by Siam Wisdom.

It is “a mixture of comfort food and a mixture of a food that you don’t get to eat too often”.

Despite his restaurant having to temporarily close because of Covid, he said he was luckier than most because he could still keep his staff.

“The restaurant industry is very affected and we try to fight, but the chance is thin,” he said. “The government needs to do better.”

So far, some 50,000 restaurants nationwide have shuttered during this outbreak, said Taniwan Koonmongkon, president of the Thai Restaurant Association, which has caused a loss of jobs for over half a million people.

“In the first two waves, the kite could still fly with the thread, but this third wave has seen the thread cut,” Taniwan said. “The kite is now going down.”

Food for Fighters founder Panchana Vatanasathein — a restaurateur herself and had started her project initially to help hospital workers — was far blunter.

“I have no hope for the government,” she said as kitchen staff worked rapidly around her to prepare the meals before they were ferried to Khlong Toei in Silver Voyage Club’s luxury sedans.