Elephant in the Room: Thai Family Gets Repeat Mammoth Visitor 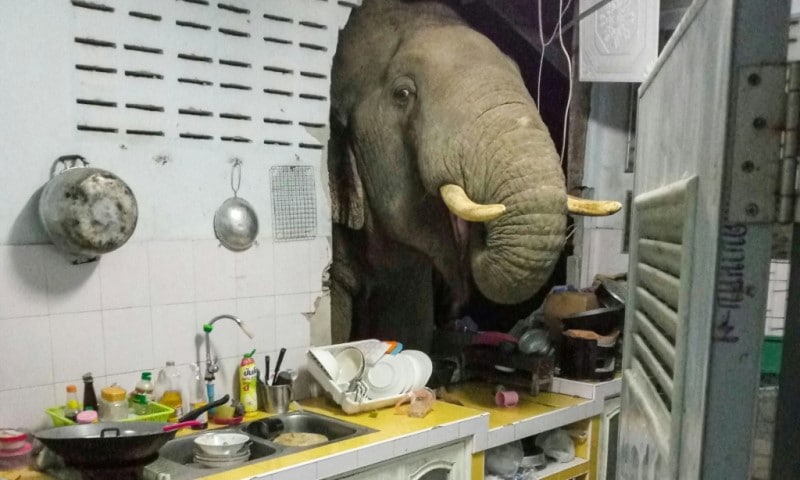 The elephant poked its head into a Thai kitchen, using its trunk to find food

Some families living in a jungle may be fearful of things going bump at night, but for one household in Thailand, the sight of an elephant rummaging through their kitchen was not a total shock.

“It came to cook again,” wrote Kittichai Boodchan sarcastically in a caption to a Facebook video he shot over the weekend of an elephant nosing its way into his kitchen.

Likely driven by the midnight munchies, the massive animal pokes its head into Kittichai’s kitchen in the early hours of Sunday, using its trunk to find food.

At one point, it picks up a plastic bag of liquid, considers it briefly, and then sticks it in its mouth — before the video cuts out.

Kittichai and his wife live near a national park in western Thailand, by a lake where wild elephants often bathe while roaming in the jungle.

He was unperturbed by the mammoth mammal, recognizing it as a frequent visitor as it often wanders into homes in his village where it eats, leaves and shoots off back into the jungle.

The elephant had actually destroyed their kitchen wall in May, he said, creating an open-air kitchen concept reminiscent of a drive-through window.

This weekend, its sole task was to find food.

Kittichai said a general rule of thumb in dealing with unwelcome visitors crashing is not to feed them.

“When it doesn’t get food, it just leaves on its own,” he told AFP.

“I am already used to it coming, so I was not so worried.”

Wild elephants are a common sight in Thailand’s national parks and its surrounding areas, with farmers sometimes reporting incidents of their fruits and corn crops being eaten by a hungry herd.