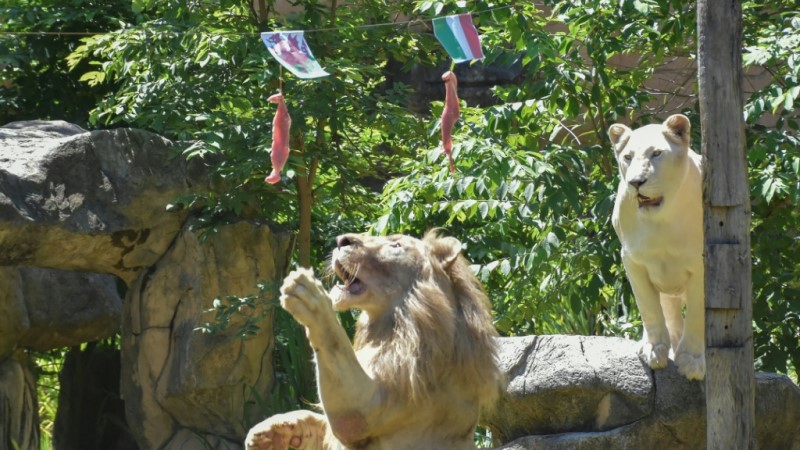 Boy, a five-year-old white lion, “predicts” an upcoming match by grabbing a piece of meat under the Scottish flag

Move over Paul the Octopus, Thailand has a new claimant to the football forecasting crown: Boy the “psychic” lion, who has so far correctly called four Euro 2020 matches.

Boy, a five-year-old white lion who lives at a zoo in northeast Thailand, makes his predictions by grabbing meat marked with national flags from a wire above his pen.

Boy has notched four successes in the first round of matches, including world champions and tournament favourites France clawing their way 1-0 past Germany on Wednesday. 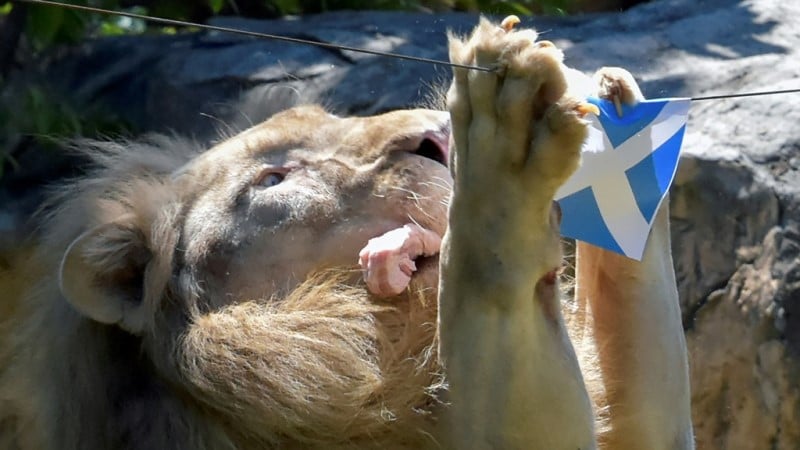 Boy, a five-year-old white lion, “predicts” an upcoming match by grabbing a piece of meat under the Scottish flag

He also forecast the “Three Lions” of England’s win over Croatia, Holland’s narrow victory over Ukraine and Cristiano Ronaldo-led Portugal’s demolition of Hungary.

The only knock to Boy’s pride so far has been Spain’s unexpected goalless draw against Sweden, which he called for Luis Enrique’s three-time champions.

The tournament was postponed from 2020 to this year because of the pandemic, and the delay seems to have helped Boy find some form with his forecasts.

“He previously predicted other football matches (in the English Premier League), but the predictions were not accurate,” Obkaew Janpatun of Khon Kaen Zoo told AFP.

For Friday’s main event, the Wembley grudge match between England and Scotland — the oldest, most played fixture in international football — Boy initially seemed to indicate a draw was on the cards.

When he leaped at the meat, both the English and Scottish portions appeared to fall together, but VAR had other ideas.

After reviewing video footage, zoo observers ruled that he had made a clear grab at the Scots’ meat first, suggesting joy for the Tartan Army.

Looking ahead to the weekend, he foresaw wins for France over Hungary and for Germany against Portugal.

And the big cat has given footballing giants Italy pause for thought by predicting a huge upset in the form of victory for Wales in Rome on Sunday.

A stray cat named “Baidian’er”, which prowled around the Palace Museum in Beijing’s Forbidden City, called the outcome of six 2018 World Cup games before its death.

And in Japan, an octopus named Rabio correctly predicted the outcome of three of the Samurai Blue’s World Cup matches.