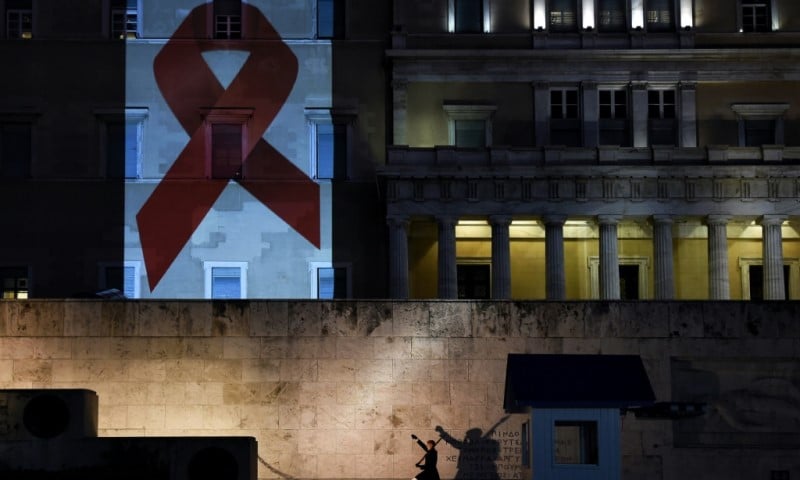 The Greek parliament is illuminated with the Red Ribbon logo of HIV AIDs during the World AIDS Day on December 1, 2016

Forty years ago this month the first men began dying of a mysterious disease in California that would later be identified as AIDS.

It would go on to claim millions of lives across the world.

Here is a look at the discovery and the fight against the deadly condition.

In June 1981 US epidemiologists report five cases of a rare form of pneumonia in gay men from California, some of whom have died. Unusual versions of skin cancer are identified in others. 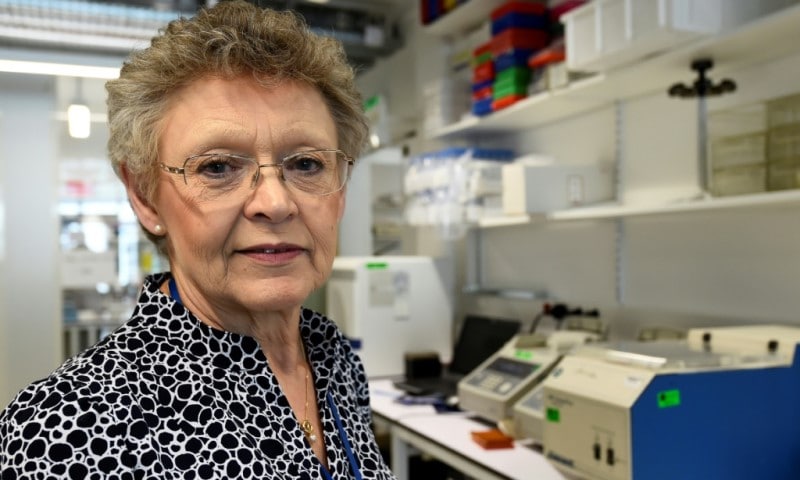 French virologist Francoise Barre-Sinoussi, in a 2017 picture at the Institut Pasteur in Paris; Barre-Sinoussi and fellow French researcher Jean-Claude Cherman were the first to identify the AIDS virus

It is the first alert about Acquired Immune Deficiency Syndrome (AIDS), still unknown and unnamed.

Doctors identify “opportunistic infections” among injected drug-users late in the year and in hemophiliacs and Haitian residents in the United States (mid-1982).

The term AIDS appears for the first time in 1982.

In January 1983 researchers in France, Francoise Barre-Sinoussi and Jean-Claude Chermann, working under Luc Montagnier, identify the virus that “might be” responsible for AIDS. It is dubbed LAV.

The following year, US specialist Robert Gallo is said to have found the “probable” cause of AIDS, the retrovirus HTLV-III.

The two viruses turn out to be one and the same, and in May 1986 it becomes officially known as the human immuno-deficiency virus, or HIV.

Barre-Sinoussi and Montagnier win a Nobel prize in 2008 for their discovery.

In March 1987, the first anti-retroviral treatment known as AZT is authorized in the US. It is expensive and has many side effects.

The World Health Organization (WHO) declares December 1, 1988 the first World AIDS Day, to raise awareness. By June the following year the number of AIDS cases worldwide is estimated at more than 150,000. 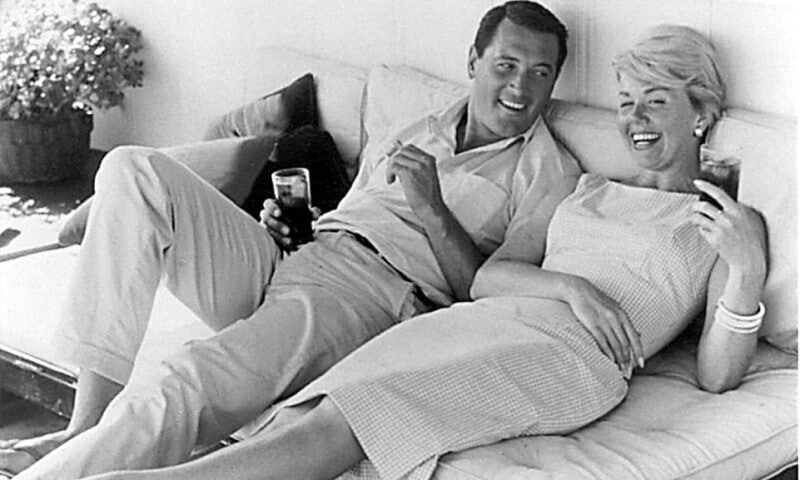 Actor Rock Hudson, pictured here with US actress Doris Day (R), was the first major celebrity to die of AIDS

US actor Rock Hudson is the first high-profile AIDS death in October 1985. A host of other stars succumb to the disease, including British singer and Queen frontman Freddie Mercury (November 1991) and the legendary Russian dancer and choreographer Rudolf Nureyev (January 1993).

In 1994, AIDS becomes the leading cause of death among Americans aged between 25 and 44.

A new class of drugs signals the start of combinations of different anti-retroviral therapies.

Called tri-therapies, they provide the first effective treatment for HIV although they are not a cure and remain costly.

1996 is the first year in which the number of AIDS deaths declines in the US. 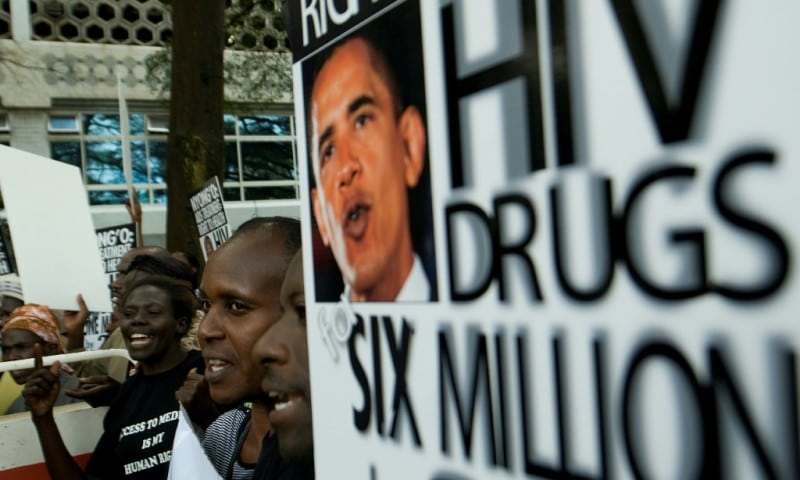 A report released by WHO and the Joint United Nations Program on AIDS (UNAIDS) in November 1999 estimates the number of people infected with HIV since it first appeared at 50 million, of whom 16 million have died.

Africa is the hardest-hit continent, with 12.2 million cases.

In February 2003, US president George W. Bush launches the President’s Emergency Plan for AIDS Relief, or PEPFAR, to combat the spread of AIDS in 15 of the hardest-hit areas of Africa and the Caribbean.

With an initial budget of $15 billion over its first five years, PEPFAR had by 2018 committed $70 billion to the AIDS response. 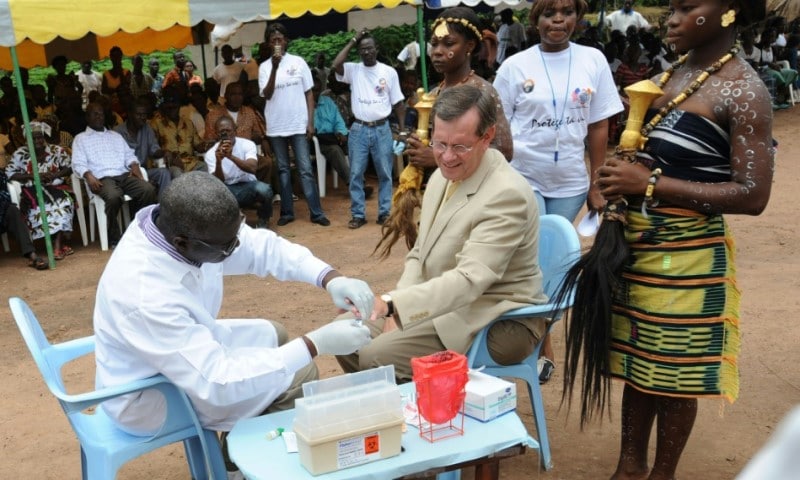 Then US health secretary Michael O.Leavitt (C) is given an AIDS-test in the village of Lomibo in Ivory Coast during a 2008 visit to organisations fighting HIV AIDS

He underwent total body irradiation to treat leukemia and nearly did not survive the process.

In July 2012 the first-ever daily pill to help prevent HIV infection is approved by US regulators. Truvada is a pre-exposure prophylaxis, or PrEP, taken by high-risk people who are HIV-negative in order to prevent them from being infected.

For the first time ever, more than half of the global population living with HIV are receiving anti-retroviral treatment, UNAIDS reports. 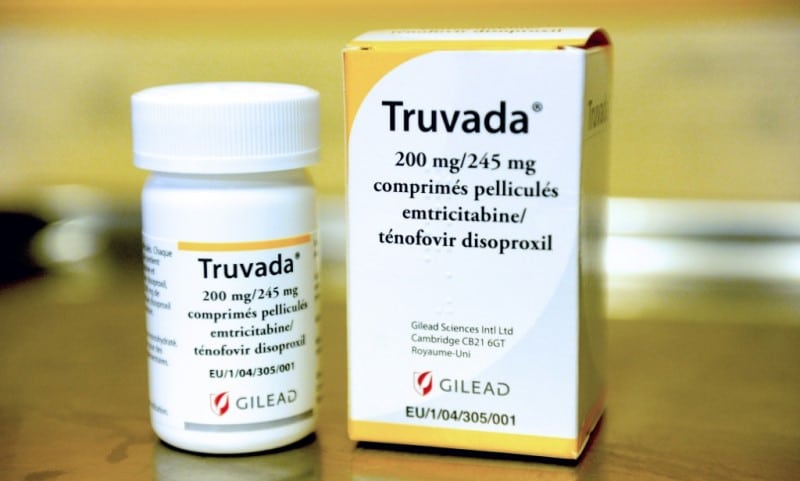 A box of the anti-retroviral drug Truvada, the first-ever daily pill to help prevent HIV infections

The second patient with sustained HIV suppression is reported after undergoing a transplant of stem cells with the same mutation as in the Berlin case.

Regular testing has confirmed that the patient’s viral load remained undetectable for 19 months and counting.

Success in producing an anti-Covid vaccine in 2020 fuels hopes that a breakthrough in securing a shot against HIV might finally be in the offing.

Moderna in January announced it has started phase one clinical trials of flu and HIV vaccines using its messenger RNA technique.

There are 37.6 million people living with HIV globally, according to UNAIDS in its latest annual figures for 2020. Since the start of the epidemic 34.7 million have died from AIDS-related illnesses.