Afghan Saffron Boss Says Taliban Will Not Silence Her 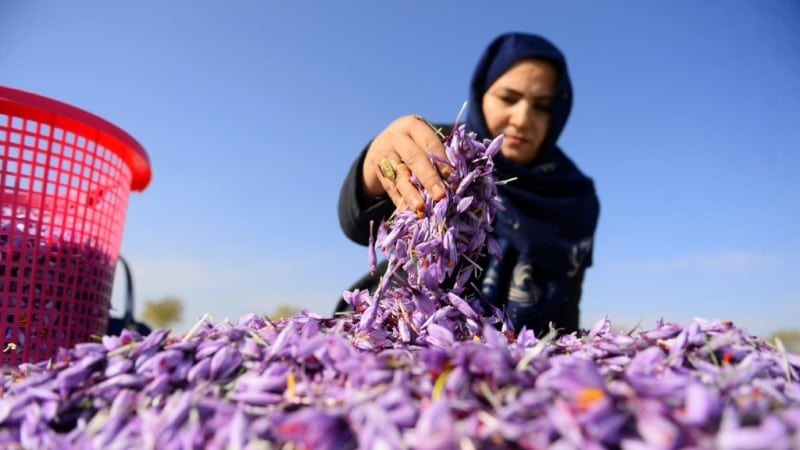 An Afghan business leader who employs hundreds of women on her saffron fields has vowed to speak up for the rights of her workers, and “not remain silent” under Taliban rule.

The hardliners have increasingly excluded women from public life since sweeping to power in mid-August, pushing many female entrepreneurs to flee the country or go into hiding.

Many fear a return to their brutally oppressive rule from 1996 to 2001 when women were effectively banned from going to school or work, and only allowed to leave the house with a male relative.

“We will raise our voice so that it reaches their ears,” said Shafiqeh Attai, who started her saffron company in the western city of Herat in 2007.

“No matter what happens we won’t just sit at home, because we have worked very hard.” 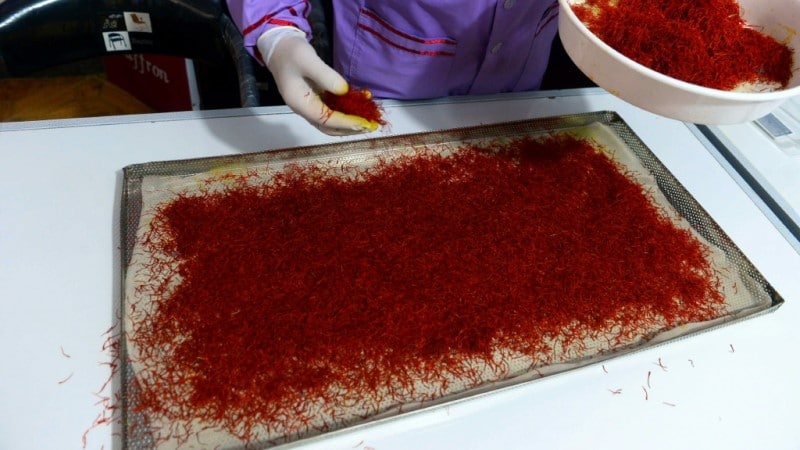 The red pistil, which is made up of three stigma, is dried and ready to be sold

We Will Not Remain Silent

More than 1,000 women pick the brightly colored crocuses across the company’s 25 hectares (60 acres) of land in the Pashton Zarghon district of Herat Province, which borders Iran.

Another 55 hectares are independently owned and operate under the collective that Attai set up for women saffron pickers, who are represented by union leaders.

Employing women allows them to be breadwinners for their families, Attai said, enabling them to send their children to school, and to buy them clothing and other essentials.

“I worked hard to establish my business,” the 40-year-old said. “We don’t want to sit quietly and be ignored. Even if they ignore us, we will not remain silent.”

The ousted, Western-backed government encouraged farmers to grow the spice — used in dishes from biryani to paella — in a bid to wean them away from Afghanistan’s huge and problematic poppy industry.

Still, the country remains by far the world’s biggest producer of opium and heroin, supplying between 80 and 90 percent of global output.

During their previous stint in power, the Taliban — who used the sale of opium to fund their insurgency — destroyed much of the crop ostensibly to eradicate it, though critics said it was to drive up the value of their huge stockpiles.

The cultivation of poppies has again surged in recent years, as poverty and instability increased. Afghanistan’s production area is now roughly four times larger now than in 2002, according to the United Nations. 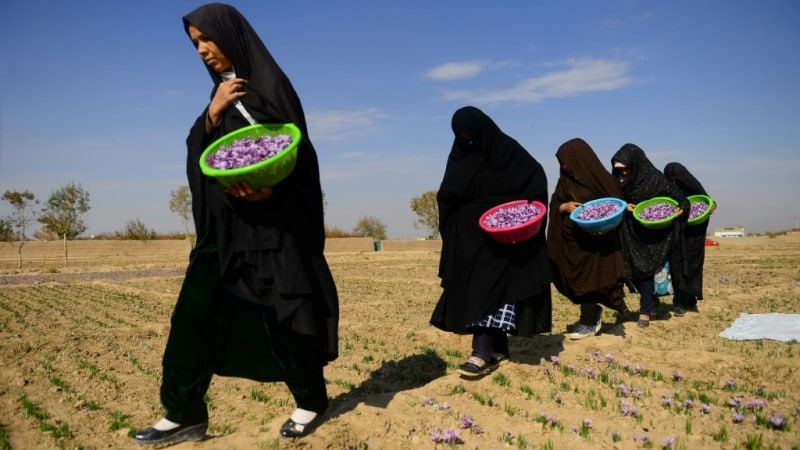 At more than $5,000 per kilogram (2.2 pounds), saffron is the world’s most expensive spice, and Attai’s company produces between 200 and 500 kilos each year.

The pistil of the flower has for centuries been used around the world in cooking, perfumes, medicines, tea and even as an aphrodisiac — and because of its high price has been dubbed “red gold” by those who rely on its cultivation.

Best grown in the baking hot sun, the bright purple saffron flowers are harvested in October and November by armies of workers, many of them women in their fifties and sixties, who start picking at dawn before the plants wilt later in the day. 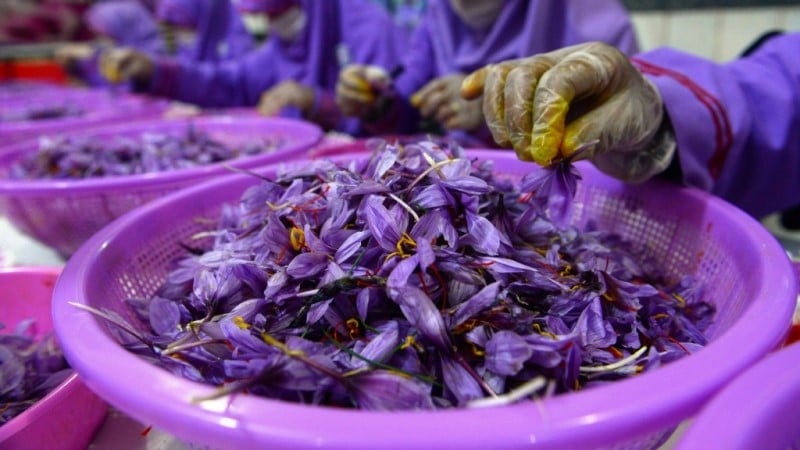 Attai is concerned not just about the future of her business, but also for women across Afghanistan who are living in limbo, uncertain about jobs, education and representation in government.

“Now that the government of the Islamic Emirate is here we are very worried that they will block our work,” she said.

“I’m not just thinking about myself, I’m thinking about all those that this business supports to run their homes,” she said, noting that some of her employees are the sole breadwinners in their families.

“I am worried that 20 years of hard work by these women will go to waste.” 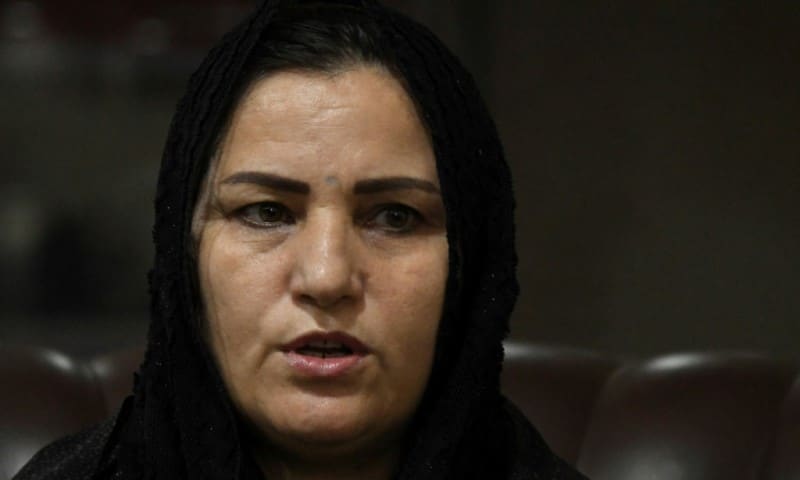 “Not a single man is brave enough” to stop Attai and her female colleagues from working, she says

In the 20 years between the US-led ouster of the Taliban in 2001 and the Islamists’ return, many women became business leaders, particularly in cities like Herat.

Long a key commercial hub near Iran and Turkmenistan’s borders, the city has in recent months suffered from the flight of many businesswomen.

Younes Qazizadeh, head of the city’s chamber of commerce, told AFP that he hoped the Taliban would make an official announcement to indicate that “women could come back and do business under this government as well”.

For now, the fate of businesses like Attai’s hangs on a thread.

“It is our hope to start women’s businesses again in our country,” Qazizadeh added.

Attai said that for now, she is staying in her homeland because she has “some hope” that her business can survive.

Ahead of the US pullout, a mammoth airlift saw 124,000 people evacuated from Kabul airport.

“I could have left as well. But I didn’t leave because all the hard work and effort that we put in should not be ignored,” Attai said.
“I don’t think they will block our work,” she added, referring to the Taliban.

“We are a company which is completely run by women and employs women — not a single man is brave enough to stop that. A woman who has shovelled her fields day and night cannot be ignored.”