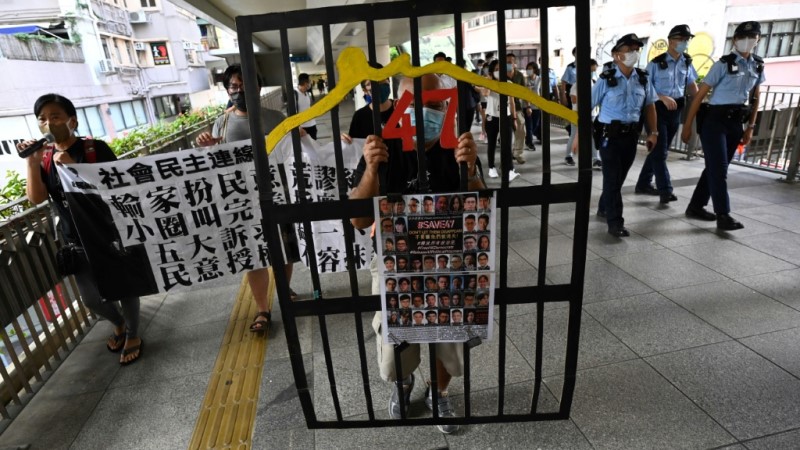 More than 70 people, including many of the city’s most prominent democracy activists, have been charged with national security crimes, almost all for holding political views now deemed illegal

A Hong Kong man who chanted protest slogans pleaded not guilty to inciting secession on Tuesday in the second national security case to come to trial as authorities wield the sweeping new law to snuff out dissent.

China imposed a national security law last year in response to massive democracy protests, a move that has brought mainland style political speech curbs to the once outspoken business hub.

The city’s first national security trial took place in July when a man was convicted of terrorism and secession after he rode his motorbike into police while flying a protest flag.

But this week’s trial of Ma Chun-man is more of a legal weather vane because — much like the vast majority of upcoming national security trials — the offenses do not involve a violent act and revolve instead around what someone has said.

Ma, a 31-year-old former food delivery driver, is accused of trying to separate Hong Kong from China by chanting slogans and displaying placards as well as quotes given to reporters at 20 different rallies between August and November last year.

Most of those charged under the national security law are denied bail and Ma has been in custody since his arrest 10 months ago. He faces up to seven years in jail if convicted.

Prosecutors said slogans Ma used that incited secession included “Liberate Hong Kong, revolution of our times”, “Hong Kong independence, the only way out”, “Hong Kongers, build our own country”, “One nation, one Hong Kong” and “All shall be valiant, start armed uprising”.

National security judges previously ruled in the July trial that “Liberate Hong Kong, revolution of our times”, a popular protest slogan, was secessionist.

Ma had made clear he intended the challenge the security law and had called for others to protest against its implementation, prosecutors said.

“The Basic Law provides freedom of speech for Hong Kong people,” he said at one of the rallies before his arrest, referencing the city’s mini-constitution.

In another interview he said his definition of “revolution” meant for Hong Kong people to regain sovereignty and achieve the right to elect their own leaders by universal suffrage.

China said the security law was needed to return stability to Hong Kong after the democracy protests and would only affect “a tiny minority”.

But it has transformed the city, radically reshaping its political, cultural and legal landscape.

More than 70 people, including many of the city’s most prominent democracy activists, have since been charged with national security crimes, almost all for holding political views now deemed illegal.