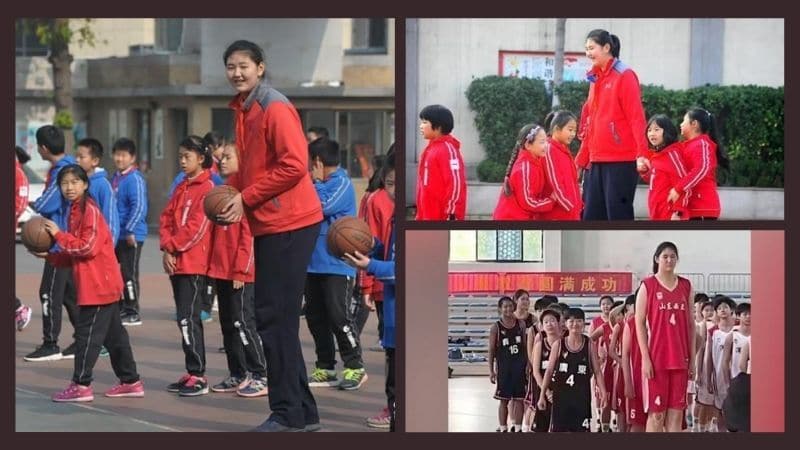 Fourteen-year-old Zhang Ziyu has gotten the attention of thousands of basketball fans online for her amazing basketball skills. The 7-footer teen athlete has been widely compared to basketball icon Yao Ming.

While most fourteen-year-old girls are still waiting for their growth spurt, Zhang Ziyu has gone past that. Towering at 7 feet and 4 inches, the young athlete has garnered viral status on the internet in a video that showcased her basketball prowess.

People on the internet were quick to compare the teen athlete to basketball legend Yao Ming, who is only 2 inches taller than her. However, the height difference to her opponents is more drastic than that of Yao’s.

About the Viral Video

The video showed her scoring a staggering 25 rebounds, 42 points, and six blocks in the under-15s tournament. The match was held in Jingzhou, Hubei Province. The clip was originally shared on Weibo, which is China’s Twitter equivalent.

“The future of the Chinese women’s basketball counts on you,” shared one Weibo user.

The video also highlights how tall she is over her opponents, and how she can block their attempts with little effort. The reuploaded viral clip has been viewed more than a million times on Twitter.

The almost comical reel showed Ziyu standing over two feet tall among other players. She’s so tall, tiptoeing and jumping aren’t even necessary. Even when other basketball players stretch their arms, they are barely able to block Ziyu’s attempts.

People on Twitter were also enamored by her unique height, with one user saying “she is just 14 years old. What will be her height when she reaches 20 or 22.”

Despite this, fans were quick to give credit to her opponents. Despite being outmatched, they still tried their best to win.

But although she garnered praise, some people felt that letting her play in the league was a disadvantage to other players. But considering the absence of professional basketball rules when it comes to height, Ziyu’s participation in her division is technically fair.

Basketball Is In The Blood

Ziyu was born in Shandong Province in East China, and she is no stranger to basketball. Her parents were both players of the sport. Her father is 7-foot-tall, while her mother, Yu Ying, a former member of China’s National Women’s Basketball Team, is 6-foot-6 tall.

A lot of Weibo users wished the young girl a successful basketball career ahead, as they anticipate her to become China’s next basketball star.

“The point is that she is only 14, she will have a promising future if she improves her skills and confrontation ability,” one user said.

Since Ziyu was young, she was already towering among her peers. According to the Global Times, the prodigy was 5-foot-2 when she was in first grade. By the sixth grade, she was already 6-foot-9.

Why Is Height Such a Big Deal in Basketball?

But with most players almost at 7 feet, how important is height in basketball? It turns out, it’s not just a coincidence.

Tall players have a greater advantage at reaching towards the net and defending the ball against competitors. Aside from the height, other important features for basketball players include hand span and arm reach.

The closer a person is to the basketball goal, the more they can accurately take a shot, and the less force they need to apply to propel the ball into the basket. When playing offensive positions, Ziyu’s height allows her to shoot the ball with less risk of another player swatting the ball away from her hands.