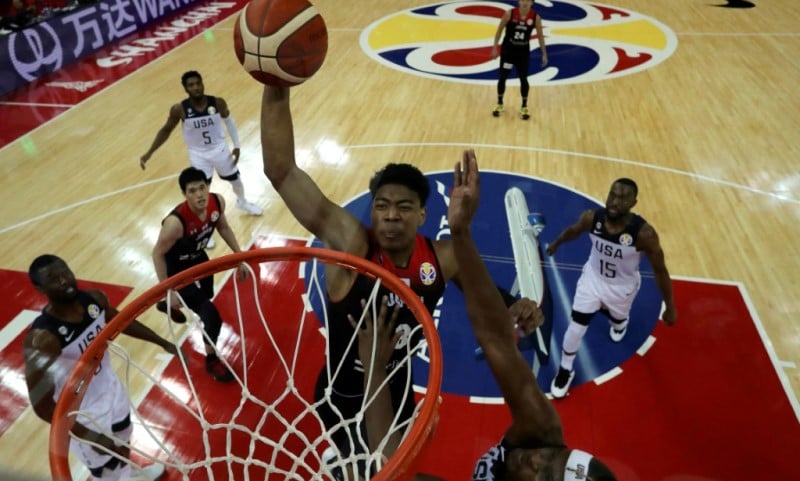 NBA star Rui Hachimura will carry Japan’s flag at the Tokyo Games, Japanese Olympic chiefs said Monday — although fans might not be allowed into the stadium to watch the opening ceremony.

The Washington Wizards forward will carry the flag along with twice-world-champion wrestler Yui Susaki at the July 23 opener for the pandemic-postponed Games.

But with concern growing again over rising coronavirus cases, organisers have said they may need to rethink attendance limits for Olympic events to reduce infection risks.

On Monday, Games chiefs said they would push back the announcement of results of a ticket lottery for oversubscribed events to Saturday — less than two weeks before the opening ceremony.

The 23-year-old Hachimura, whose father is Beninese and mother is Japanese, said carrying his nation’s flag was “a great honor”.

“I’d love this to be an opportunity for kids and everyone else in Japan to watch me and my teammates playing at the Olympics, and take even more of an interest in basketball and sport as a whole,” he said in a statement.

In May, Hachimura hit out at racism on social media, saying he receives racist messages “almost every day”.

Details of the opening ceremony have been kept under wraps, with local media reporting it will be half an hour longer to allow for Covid-19 countermeasures such as distancing.

However it is still unclear how many seats, if any, will be filled at the national stadium.

Organizers have set a limit of 10,000 domestic fans, or half of each venue’s capacity.

But Games president Seiko Hashimoto warned Friday that “having no spectators is an option”.

Japan’s coronavirus outbreak has not been as severe as in some countries, with around 14,800 deaths, but experts say another wave could stretch medical services as the Olympics begin.

Media reports said Monday the government this week was likely to extend anti-virus measures in Tokyo and elsewhere, with a decision on Olympic fans to follow.

The current restrictions — which cap spectators at sports events to 5,000 — are due to end on Sunday but could now be in place during the Olympics, the reports said.

No more tickets will be sold and spectators from overseas are barred.

Olympic athletes have begun arriving in Tokyo, and on Sunday a Serbian rower tested positive for the virus at the airport.

A member of the Ugandan team also tested positive for a second time, after being discharged following a period of isolation.

On Sunday, a 53-year-old woman was arrested for spraying a runner in the nationwide torch relay with liquid from a water gun.

The woman, who squirted the unspecified substance as the runner passed with the flame, said she was opposed to the Olympics being held.