China Blasts US Blacklist Over Xinjiang as ‘Groundless’

China hit back at the United States on Tuesday over the blacklisting of 28 Chinese entities accused of being implicated in rights violations against mostly Muslim minorities in the Xinjiang region, saying the claims are “groundless”.

US Secretary of Commerce Wilbur Ross announced the move to bar the entities on Monday, saying his country “cannot and will not tolerate the brutal suppression of ethnic minorities within China.”

But Beijing expressed “strong dissatisfaction and resolute opposition” to the blacklist and defended its policy in the western frontier region, where rights groups say more than one million Uighurs and other mostly Muslim minorities are held in re-education camps.

“There is no such thing as these so-called ‘human rights issues’ as claimed by the United States,” said foreign ministry spokesman Geng Shuang on Tuesday.

“These accusations are nothing more than an excuse for the United States to deliberately interfere in China’s internal affairs.”

The blacklisted firms included video surveillance company Hikvision, as well as artificial intelligence companies Megvii Technology and SenseTime, according to an update to the US Federal Register set to be published Wednesday.

The ban comes amid heightened tensions between the US and China, particularly over trade policy and Beijing’s actions in Xinjiang.

The world’s two biggest economies are in the midst of a trade war, having exchanged punitive tariffs on hundreds of billions of dollars in bilateral trade. 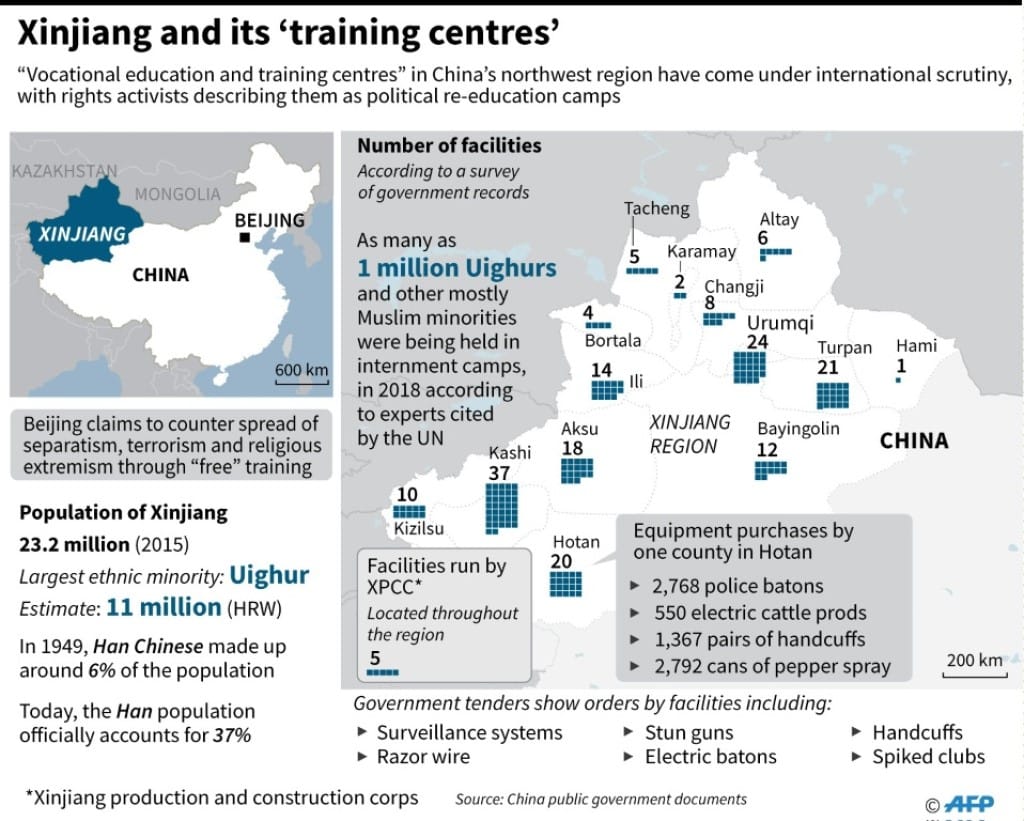 On Monday, the White House announced that talks between the two countries were set to resume on Thursday, with Beijing’s top trade envoy Liu He due to meet US Trade Representative Robert Lighthizer and Treasury Secretary Steven Mnuchin.

The US has meanwhile stepped up its rhetoric against Beijing over its policies in Xinjiang, saying they are reminiscent of Nazi Germany.

“In Xinjiang, the Chinese government prevents Muslims from praying and reading the Quran, and it has destroyed or defaced a great number of mosques,” Sullivan said.

“This is a systematic campaign by the Chinese Communist Party to stop its own citizens from exercising their unalienable right to religious freedom.”

China had until recently denied the existence of re-education camps, but now claims they are “vocational training schools” necessary to control terrorism.

The 28 entities blacklisted include 18 public security bureaus in Xinjiang, a police college and eight businesses.

“These entities have been implicated in human rights violations and abuses in the implementation of China’s campaign of repression, mass arbitrary detention, and high-technology surveillance against Uighurs, Kazakhs and other members of Muslim minority groups,” the Federal Register update said.

Several of the blacklisted firms issued statements slamming the decision.

Video surveillance company Hikvision said the US listing had “no factual basis.”

“(We) call on the US government to re-examine based on the principle of fairness, justice and non-discrimination, and remove Hikvision from the entity list,” it said.

Artificial intelligence firm Megvii, which is backed by e-commerce giant Alibaba, said in a statement it “strongly” protests against the decision, which it said “reflects a misunderstanding of our company.”

Megvii said only one percent of its revenue in 2018 was from projects in Xinjiang, while no revenue at all was generated from the region in the first six months of 2019.

AI company SenseTime said it was “deeply disappointed” and would “work closely with all relevant authorities to fully understand and resolve the situation.”

The blacklisting of the companies follows Washington’s earlier move to stop technology giant Huawei and other Chinese firms from obtaining government contracts.

Hikvision was also included in that ban, which will preclude any US federal agency from purchasing telecom or technology equipment from the firms and comes amid concern that Huawei is linked to Chinese intelligence.

The US fears that systems built by Huawei could be used by Beijing for espionage via secret “backdoors” built into telecom networking equipment.