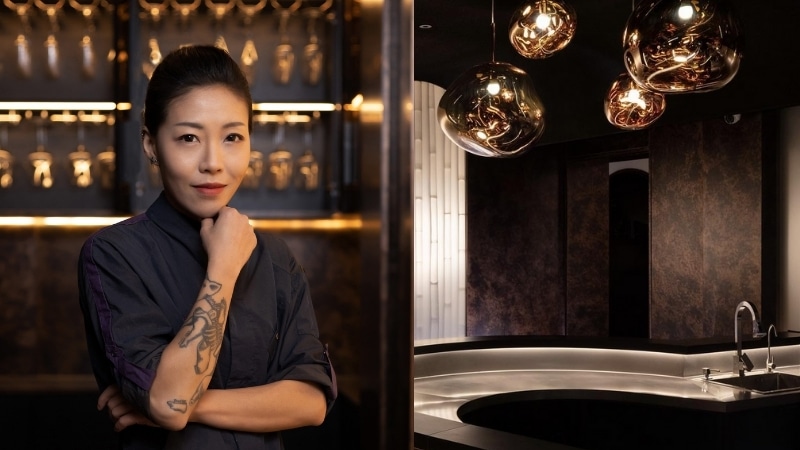 It’s hard to imagine that just a couple of years ago, DeAille Tam was told to stay away from the kitchen simply because many believed it was a task meant solely for men. Now, Tam is taking the culinary world by storm and her award as Asia’s Best Female Chef is a testament to that.

The Chinese cuisine’s rich history and variety never intimidated Tam. At Obscura, Shanghai, her ability to push beyond the limit of traditional cuisine is evident.

Her menu stands out with unexpected yet mouth-watering combinations such as Brittany lobster and mustard from the Guangdong province, or Fish maw with barbequed bun, topped with a decadent gold leaf.  Tam even reinterprets the classic bacon and pepper dish from Hunan Province by using Australian Wagyu.

Tam’s sources of inspiration are eclectic, to say the least. Some of her visions are inspired by small Chinese provinces like Xinhui, and large metropolises such as Shanghai. She also loves to integrate western techniques and products into her work.

According to the 37-year old chef, her perspective in gastronomy is rooted in the name of her establishment. Obscura means something uncertain, or limitless.

“You know there is something interesting happening on the other side of the black hole, something alluring and captivating. That is what we want: a restaurant that pulls you in. And once you’re sucked into that black hole, we want to capture you with our food, to create a feeling like: ‘I never thought that the food I knew could take on this new shape, texture or flavor’.”

Despite opening only in November 2020, Obscura has cemented its name in the industry.  The restaurant was developed by Tam and her co-chef and husband Simon Wong. Since its opening, it has become a favorite of foodies in Shanghai.

After working together under the tutelage of chef Alvin Leung, the two were inspired to explore Chinese cuisines by traveling China in 2019. This later on motivated them to open Obscura.

Tam’s Tough Journey to the Top

Tam moved with her family to Canada when she was just 10 years old. She was studying engineering when she fell in love with culinary arts. At first, her parents opposed her idea to switch careers, but not because they believed she would be more successful in engineering. Their resistance came from experience.

Tam’s father used to own a diner in Hong Kong, and he was afraid that Tam’s journey as a chef would cause her to live an uncomfortable life.

“As a female and as the oldest child in the family, there were certain views of what society expected me to be,” she said, adding that when she started out, she faced pushback from males in the industry who treated her unfairly. In one instance, Tam recalls being denied the opportunity to butcher a pig and being told to simply learn by watching men do it, in fear that handling the animal would hurt her.

However, Tam did not let that stop her. Being a person that did not give up too easily, Tam recalls wanting to do the job herself.

“It’s my right to be able to learn and do something new. I asked them: ‘how do you know I’m going to get hurt if you don’t let me try?’” After multiple persuasive speeches, Tam was finally able to do it, and the rest is history.

No Limits for Women

Tam’s time working under chef Leung at Bo Shanghai earned her the title of the first female chef in China to earn a Michelin star. Now, her latest and most impressive accolade is proof that she is rewriting what is possible for women to achieve in the industry.