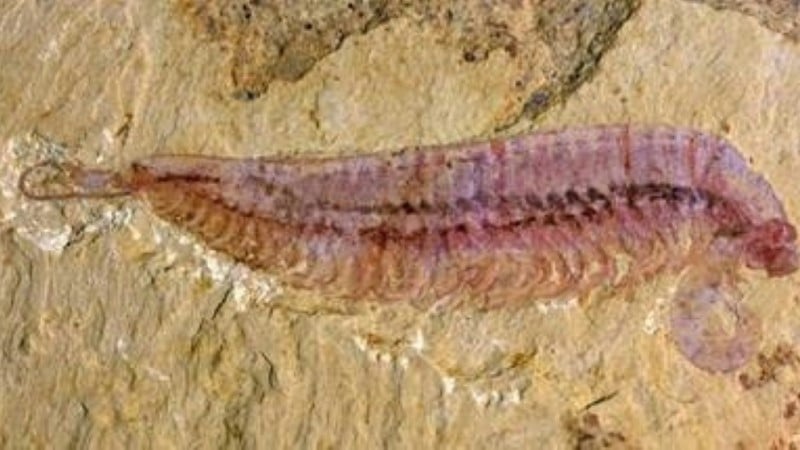 Arthropods, ranging from lobsters and crabs to spiders and millipedes, make up around 80 percent of all animal species alive today and are characterized by their hard exoskeleton.

But their evolution has long remained something of a mystery, because their ancient ancestors carry a variety of features that their modern counterparts do not.

Enter Kylinxia zhangi, a shrimp-like creature preserved in fossils found in China’s Yunnan province — a discovery that researchers now say could be a key “missing link” in arthropod evolution.

Like today’s arthropods, Kylinxia had a hard shell, a segmented body and legs with joints.

But the ancient creature also had characteristics in common with even older animals, leading researchers to name it after the “Kylin”, a creature in traditional Chinese mythology with attributes from a variety of animals.

First there are those eyes — three smaller ones in a row on its head, with two larger ones directly behind.

It might sound bizarre, but it’s a feature scientists have seen before, in an ancient creature called Opabinia, known informally as a “weird wonder”.

And the Kylinxia’s two spiky front appendages, researchers say, are reminiscent of another creature thought to be an arthropod ancestor: the Anomalocaris.

While both have been theorised as precursors to modern arthropods, an evolutionary gap in the fossil record made that difficult to prove — until this week.

“It bridges the evolutionary gap from Anomalocaris to true arthropods and forms a key ‘missing link’ in the origin of arthropods,” added Zeng, a researcher at the Nanjing Institute of Geology and Paleontology (NIGPAS), in a press release.

In fact, when the first of the fossils was revealed, only its front legs were visible, and researchers assumed it was another specimen of Anomalocaris, said Diying Huang, a professor at NIGPAS.

“It looked strange, like a frontal appendage of Anomalocaris attached to the body of a common arthropod,” Huang, the study’s corresponding author, told AFP.

“After careful preparation… I knew it was a new and very important arthropod.”

Part of the value of Kylinxia lies in the unusual detail preserved in the fossils.

“For example, nervous tissue, eyes, and digestive system — these are soft body parts we usually cannot see in conventional fossils.”