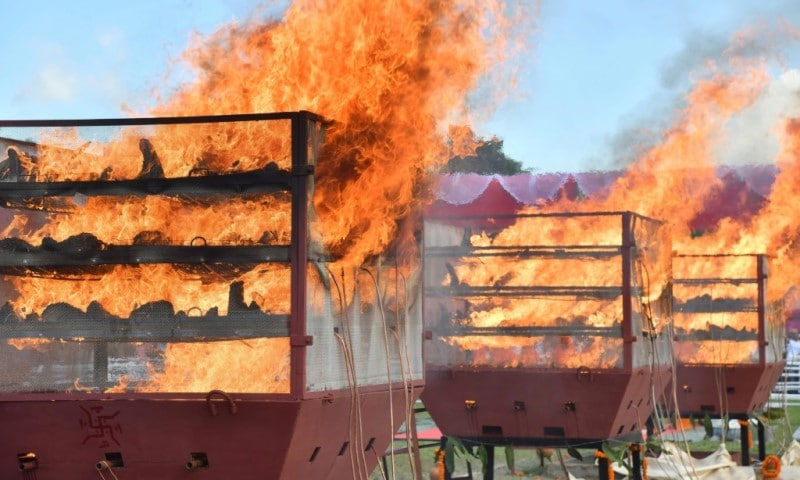 The horns were placed in large furnaces before being set alight

Nearly 2,500 rare rhino horns were destroyed Wednesday in the first ceremony of its kind in northeastern India as part of an anti-poaching drive to mark World Rhino Day.

The endangered one-horned rhinoceros used to be widespread in the region but hunting and habitat loss have slashed its numbers to just a few thousand, with most now found in India’s Assam state.

Trade in rhino horn has been banned since 1977 by the Convention on International Trade in Endangered Species of Wild Fauna and Flora.

But conservationists warn poaching attempts continue amid demand from China and Vietnam, rhino horn is promoted as a wonder ingredient in traditional medicine.

“A rhino horn has supreme value only when it is intact to the living rhino. These horns have no value,” Assam’s Chief Minister Himanta Biswa Sarma said during the ceremony in the town of Bokakhat.

“With today’s action, Assam wants to send two messages — that we don’t believe that rhino horns have any medicinal value and that we only believe in preserving the living rhinos.”

The town is near the UNESCO-listed heritage site Kaziranga National Park, home to more than 2,000 one-horned rhinos — the world’s biggest population.

At the ceremony, horns were carefully placed in layers in several large furnaces before being set alight, sending plumes of smoke into the air above fierce orange flames.

The animal parts — which contain keratin, the same protein as comes in human hair and nails — had been kept in storage by the government since 1969.

Some of the horns had been seized from poachers. Others were removed from rhinos that had died of natural causes.

All rhino deaths in the state are recorded by local police.

Before the ceremony, officials extracted DNA from each horn and gave each animal part a unique ID number to create a gene database for scientific studies and conservation efforts. 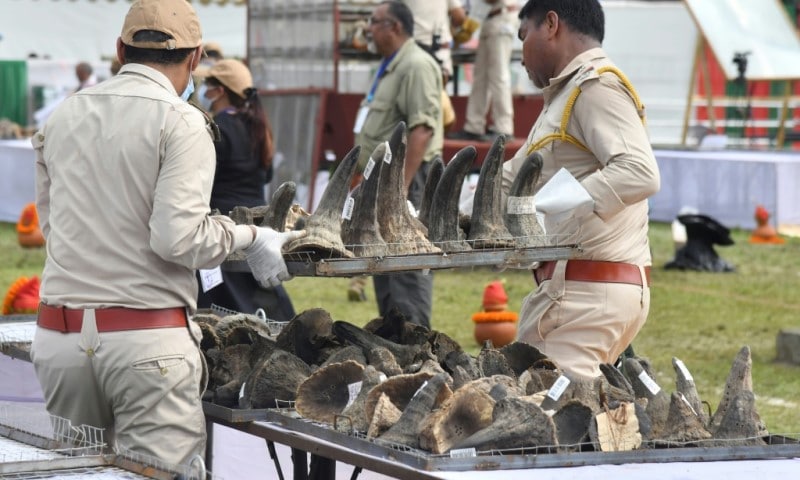 Assam’s Forest and Environment Minister Parimal Suklabaidya added that 94 horns were also set aside and would be kept for heritage purposes.

The International Rhino Foundation said on Monday in its annual report that two of the herbivores were killed by poachers in Assam in 2020.

But the global body added that rhino poaching deaths have been declining in recent years amid conservation efforts in India and neighboring Nepal.

The population of the one-horned creatures had grown to more than 3,700 after plunging to just 100 in the early 1900s, it added.