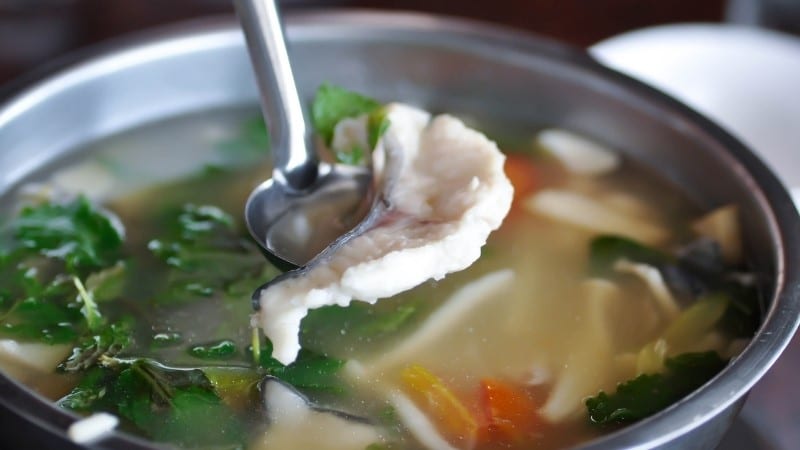 Chinese food culture constantly gets filled with new and delicious developments, and is always in the forefront of culinary trend-setting. One of the latest additions to the large variety of Chinese dining options, is the widely popular hot-pot ingredient: the crunchy grass carp fish.

The ‘crisp’ or ‘crunchy’ (脆) grass carp, as it is commonly known, is a variation of the already famous grass carp, and is normally grilled or fried, then served suspended in a sauce of spicy and sour ingredients. The more recently-developed serving method is as a hot-pot dish, which basically sees thinly-sliced fillets dipped into the boiling pot for a few minutes, coming out looking somewhat transparent, and with a crunchy texture, exploding with the flavors of the hot-pot broth.

The grass carp is native to large coastal rivers in Siberia (Amur River) and China that flow into the Pacific Ocean. They are extensively cultured for food in China, Malaysia, Singapore, Borneo, Indonesia, Thailand, Taiwan, Hong Kong and the Philippines.

In China, hot pots have been frequently evolving in terms of the ingredients that can be added to them. While the original mix was mostly vegetables and red meat, most modern hot-pot joints will have anything from noodles to mushrooms, meats, tofu, and even duck blood! It is therefore not so strange to have the crisp grass carp swim its way into the pot as well, despite how weird the pairing may sound.

More interesting, is the way in which the dish was developed in the first place, or more accurately – “discovered”. In fact, while grass carp fish has been a delicacy in Chinese cuisine for centuries, the more recent “crispy” rendition of it, is less than a few decades old, and was an unintentional one at that.

In the early 1970’s, farmers in the southern province of Guangdong (Dongsheng Town), these farmers would pour lose broken beans into the fish farm. This accidental find made them realized that a controlled diet of faba beans and broad beans feed is able to turn the otherwise mushy meat, into a crunchy, almost crispy texture, with a more brittle muscle makeup. The discovery soon became a favored method of farming the fish, and subsequently, a preferred alternative when it came to consumption.

CCTV – “The transformation of ‘Crunchy’ Grass Carp in China”

Now backed by scientific studies, the specialized diet of crisp grass carp is able to produce a more firm and chewy fish fillet, with a denser muscle fiber, and overall; a more enjoyable mastication, especially when boiled such as in a hot pot.

And so, the crunchy fish addition to the hotpot arena was born, and was quickly found to be an excellent complement to the boiling spicy soup of ingredients.

Ordinary Carp fish and “Crunchy” carp fish are visually indistinguishable, consumers can only tell them apart mostly by pricing which is usually doubled.

Two Birds With One Stone

While the strange combination has yet to make it big in the West, as grass carp has for a long time been regarded as an inferior fish, there is actually even more reason to try to bring the food to people’s plates.

Grass-carp is regarded as an invasive species. Again, diving back to the 1970’s (an apparently big decade for carp fish globally), the large and fast-reproducing fish was introduced to US waters as a means of controlling undesired parasites. Shortly after, it had begun to thrive uncontrollably, now seen as a threat to other native species, and is therefore encouraged to be eaten as much as possible.

As with many food-trends in China, once a new flavor makes it big, an entire ecosystem of dining establishments gets built specifically around it, and more often than not; is there to stay for the long run, adding to the huge list of Chinese delicacies to be tried.

While you may not find this in your local Chinese supermarkets’ seafood tank yet, you can certainly try them in some of the big Hot-pot chains around the States or purchase in bulk from wholesalers.