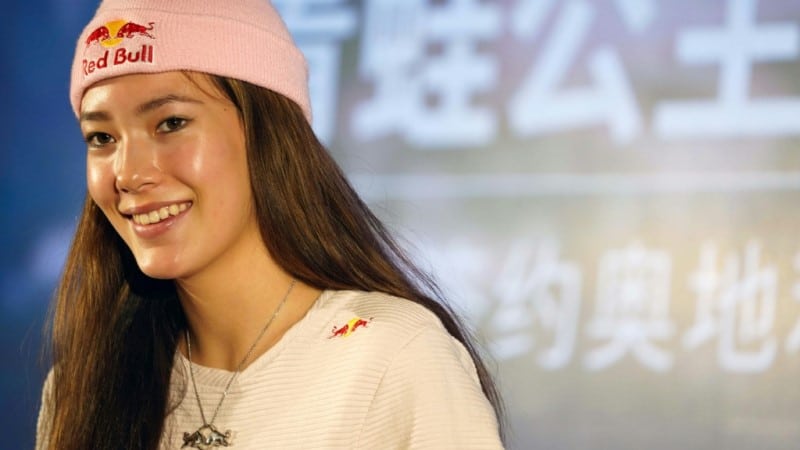 ​Freestyle skier Eileen Gu, also known as Gu Ailing, was born in San Francisco but could be one of the faces of the Beijing 2022 Winter Olympics after electing to compete for China

The 17-year-old is a freeskier, model and grade-A student with an American father and Chinese mother. She grew up and still lives in the United States.

But in June 2019 she made the “incredibly tough” decision to compete for China, a minnow in ski sports but with grand ambitions.

The world’s most populous country is scheduled to host the Winter Olympics for the first time a year from now, although the coronavirus pandemic and boycott calls threaten to cast a pall over preparations.

Gu, who was 15 when she pledged her allegiance to China, wrote on Instagram that she was “proud of my heritage and equally proud of my American upbringings”.

China won just one gold medal at the 2018 Pyeongchang Winter Games in South Korea but the Chinese-speaking Gu has been enthusiastically embraced with the country’s media affectionately dubbing her “Frog Princess” after a green helmet she wore.

“I was raised bilingual and spent every summer in Beijing so I know Chinese culture and American culture as well,” she told the state Xinhua news agency this week.

“So I have that dual identity, where together, two halves make a whole for me.”

Gu graduated from a San Francisco high school last year, 12 months early, so she could forget her studies for a bit and focus on her Beijing 2022 training.

She reportedly scored 1,580 points out of a maximum 1,600 in the SAT, the test used for college admissions in the United States, and has been offered a place at Stanford.

A fashion lover, Gu has featured in glossy magazines such as the Chinese editions of Vogue, Cosmopolitan and Harper’s Bazaar, and already has a raft of commercial deals, including with drinks giant Red Bull.

But for all the modelling shoots and visits to Milan and Paris fashion weeks, it is her performances in freestyle skiing which have earmarked her as a potential star at Beijing 2022 and beyond.

Gu started on the snow at the age of three, was in national competition at nine and won her first World Cup event at 15.

She claimed two gold medals and a silver for China at the 2020 Youth Olympic Games in Lausanne.

Underlining her medal credentials for 2022, Gu made her debut at the X Games in Aspen, Colorado at the weekend — and promptly won two golds.

No woman had ever done that on their debut in the 25-year history of the X Games and Gu was also the first Chinese winner.

It prompted Xinhua on Monday to run a 1,000-word feature with the headline: “17-year-old Eileen Gu, next Chinese sports icon?”

It ramps up the pressure on her for Beijing 2022 and the teenager, who is also a cross-country runner, is doing little to play down expectations.

“My goal is to win Olympic gold,” she told the official Olympic website.

“That to me is just representative of excellence in sport, it’s the top achievement, undisputedly.

“That would be so rewarding for all the work that I’ve done to achieve greatness in the sport.”