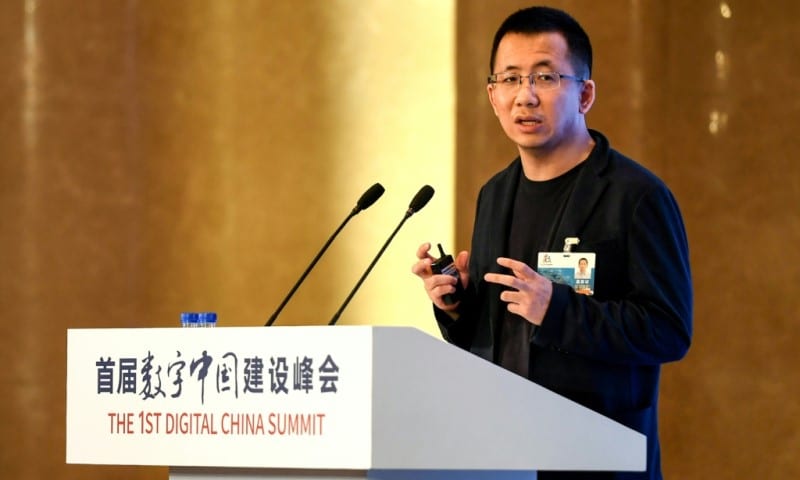 Armed with pioneering AI and a sharp nose for youth trends, Zhang Yiming revolutionised internet video with popular app TikTok and minted himself a fortune.

But at just 38 he has also found that having a seat at the top table of China’s rambunctious tech scene carries a heavy political and managerial price.

The fomer computer programmer started Bytedance in 2012 with his college friend and roommate Liang Rubo, the company’s human resources manager who will take over this year from Zhang as CEO.

Zhang has said the pair bonded over a “love for computers”, buying a computer and monitor between them as students at one of China’s top universities, in the northern city of Tianjin.

He then built a name for himself helping other students install computers — which was how he met his university sweetheart, who he later married.

In a departing memo unencumbered by the ritual self-congratulation of top executives, Zhang said he is leaving the role because he says he lacks managerial skills and prefers “daydreaming about what might be possible” to running the tech giant.

He also hopes to focus on “social responsibility”, and is already ranked as one of China’s top charitable givers.

But he steps down at a time of great pressure for many Chinese tech companies, with Beijing cracking down on its digital behemouths who wield huge influence over millions of Chinese consumers.

With a net worth of $36 billion Zhang is now China’s fifth richest person, according to Forbes.

Although he is in the upper echelons of the Beijing billionaires’ club, Zhang described himself in his frank leaving message as “not very social, preferring solitary activities like being online, reading, listening to music.”

His move to handover day-to-day running of the firm follows similar moves by other tech tycoons, including Colin Huang of ecommerce giant Pinduoduo.

“The regulatory environment for technology companies in China has become ever-changing and that requires a lot of energy and effort,” said Shen Meng, a director at Beijing-based boutique investment bank Chanson & Co.

“Wearing two hats at a company as sizeable as ByteDance is just too stressful.”

The youthful company prides itself on using artificial intelligence to personalize newsfeeds according to users’ interests, with a keen eye for the needs of China’s younger generations.

Zhang says his company’s success is down to an “ability to innovate at just the right moment”.

The group’s first flagship product was the immensely popular Chinese news aggregation app Jinri Toutiao, and its top-hitters now include the Chinese version of TikTok, Douyin, plus productivity app Lark.

Bytedance has over 60,000 employees in more than 30 countries, and TikTok has built huge followings in the US and in Southeast Asian markets.

“ByteDance is mature enough for him to step back,” said Ke Yan, a Singapore-based analyst with DZT Research.

“He can now selectively do what he thinks is important, as opposed to being a CEO who needs to handle nitty-gritty things.”

But the self-proclaimed daydreamer has faced huge pressure to convince the world that TikTok will not hand data over to China’s Communist Party.

Former US President Donald Trump made a barrage of demands on Bytedance over security concerns, including calls for the US operations of TikTok be sold to an American company or face being shut down.

Bytedance has also faced bans and fines in the US and Pakistan over content or data collection — and has been blocked in India amid bitter tensions between Delhi and Beijing.

For Zhang, the pressure has left him seeking a more straightforward worklife.

“I came to the conclusion that transitioning out of the role of CEO, with all of the related day-to-day responsibilities, would enable me to have greater impact on longer-term initiatives,” he said in his statement announcing he was stepping down.

In leaving the top role, the former programmer hopes to have the “space” to take a “more objective perspective on the company.”

– Bloomberg News contributed to this report –