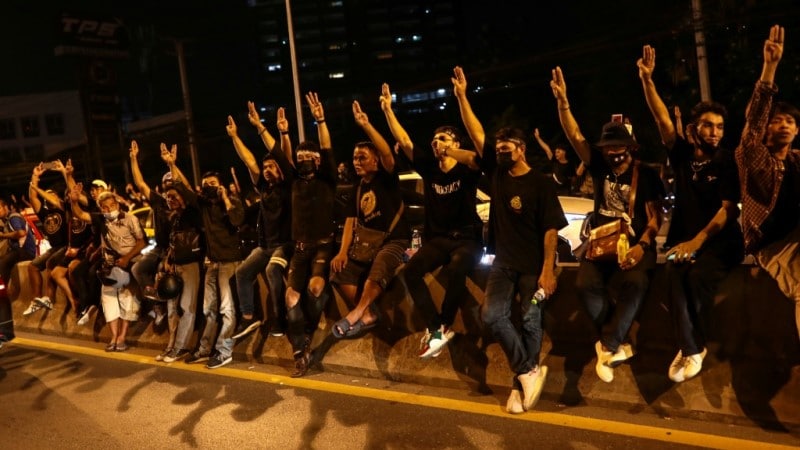 Thousands of Thai democracy activists rallied in Bangkok Wednesday to demand the king give up control of his multibillion-dollar fortune, turning their protest movement directly on the once-untouchable monarchy’s vast wealth.

At least 7,000 demonstrators — many brandishing the yellow toy ducks that have become a symbol of the movement — took to the streets near the headquarters of the Siam Commercial Bank (SCB) to protest at the secrecy surrounding King Maha Vajiralongkorn’s financial arrangements.

Thailand has for months been rocked by youth-led protests demanding a new constitution, reform of the untouchable monarchy, and for Prime Minister Prayut Chan-O-Cha to resign. 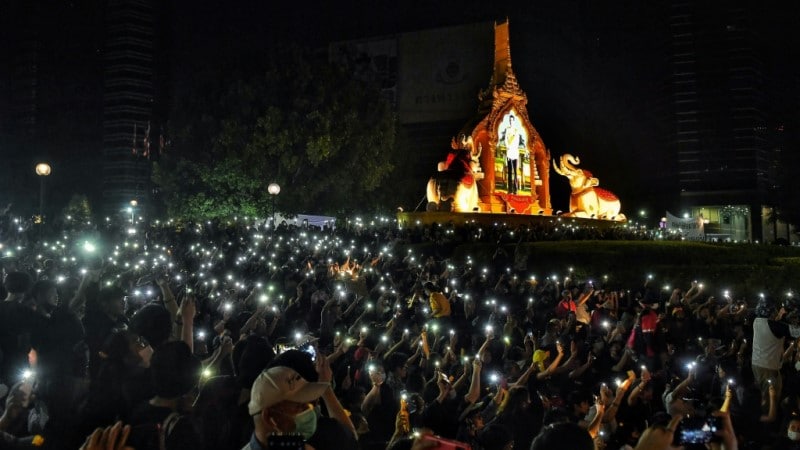 Many protesters on Wednesday sported yellow ducks — on T-shirts, hats and helmets — after demonstrators used larger inflatable versions last week to defend themselves against police water cannon and tear gas.

Every Cent, Every Baht

The kingdom has a long history of political protest but the current movement has made taboo-smashing criticisms of the royal family.

Protesters last week daubed anti-royal graffiti around police headquarters in central Bangkok and on Wednesday they called for the king to give up control of “every cent, every baht” of his huge fortune.

Soon after coming to power following his father’s death in 2016, the new king took control of the Crown Property Bureau, which has assets in banks, companies and prime real estate.

The bureau’s board was previously headed by the finance minister in an arrangement that gave a sheen of public oversight to a trust some experts estimate is worth $30-$60 billion. 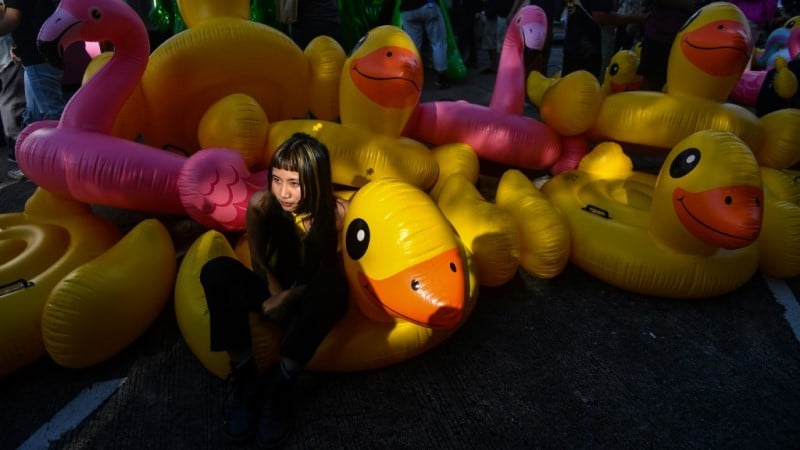 The full assets are privately held and remain a closely guarded secret.

Gail, 53, a Bangkok consultant, expressed concerns about the king’s control of the bureau.

“We don’t know how he manages it. How he uses it,” she told AFP. 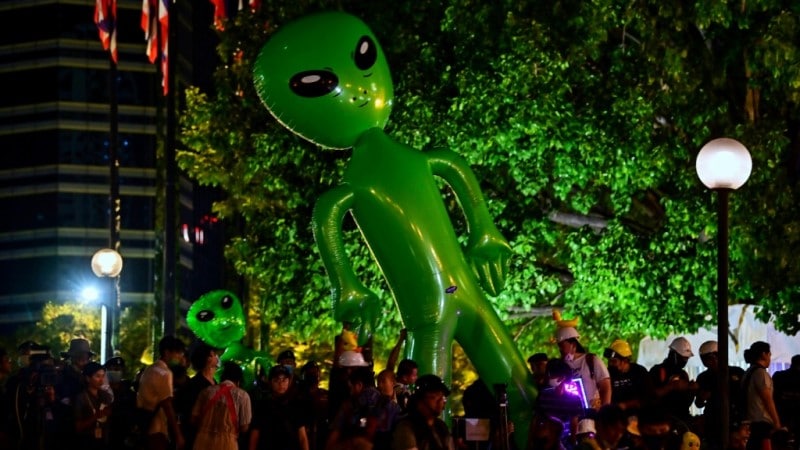 The protesters had originally planned to rally outside the headquarters of the Crown Property Bureau, prompting police to lock down the area with razor wire and rows of shipping containers.

But overnight they decided switch the protest to the main office of the Siam Commercial Bank — in which the king is a major shareholder — to avoid potential clashes with police and a rival ultra-royalist rally.

The move headed off fears of violence, after police used water cannon and tear gas at a rally outside parliament last week, with 55 people injured and six shot in scuffles with royalists. The source of the gunfire is under investigation. 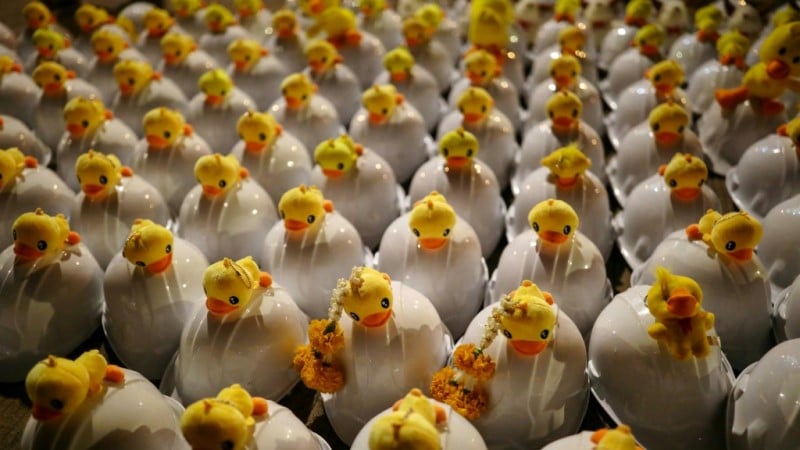 On the eve of Wednesday’s protest, 12 leaders received police orders to come for questioning over allegations of royal defamation.

Thailand has one of the harshest lese majeste laws in the world. It is routinely interpreted to include any criticism of the monarchy — including content posted or shared on social media.

Under section 112 of the penal code, anyone convicted of defaming, insulting or threatening the king, queen or heir faces between three and 15 years in prison on each count.

The laws have not been invoked since 2018, but last week Prime Minister Prayut gave the green light for authorities to use them.

Protest leaders have struck a defiant tone in response, with human rights lawyer Anon Numpha — who is among the 12 summoned for questioning — telling Wednesday’s protest “the reform of the nation has started whether you believe it or not”. 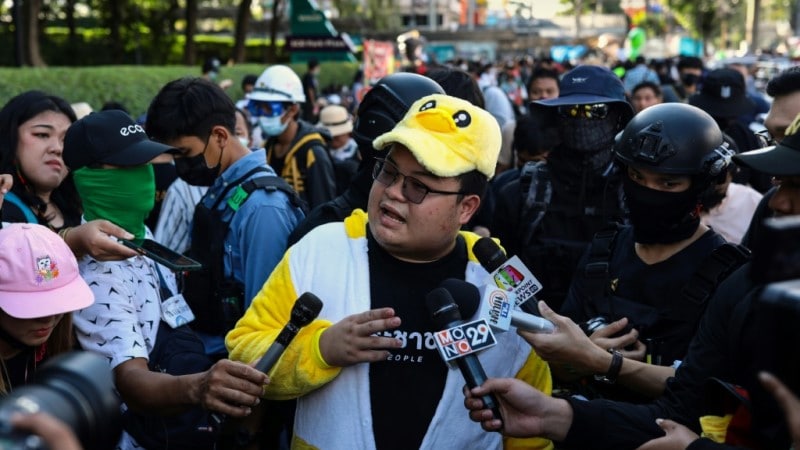 Pro-democracy activist Parit ‘Penguin’ Chiwarak, wearing a duck cap, is one of the 12 protest leaders called in for questioning

“Many Thais who had never dared question the monarchy now have started asking question about this king,” he said.

Parit “Penguin” Chiwarak, a student leader also called for questioning, told AFP he was not afraid and said the summons under section 112 would simply encourage more people to join the movement.

“Does this mean the monarchy has declared an all-out war with the people — is that right?” he said.

Government spokesman Anucha Burapachaisri told AFP the authorities were “increasingly concerned about attempts to undermine the rule of law” and would use “all pertaining laws” to pursue troublemakers.