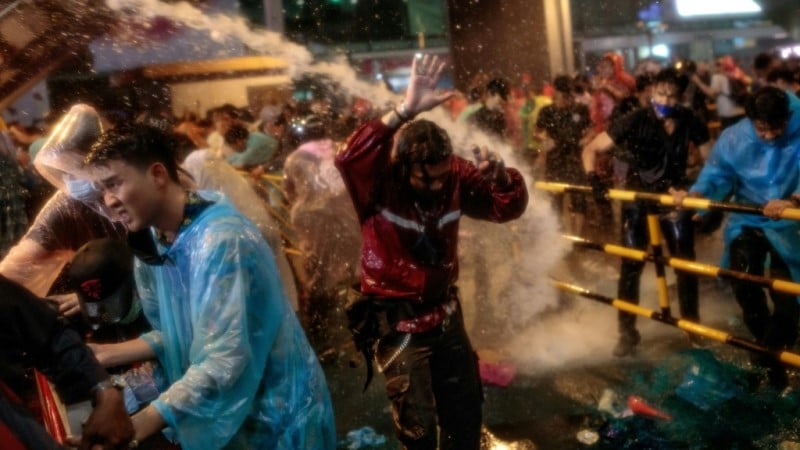 Police use water cannons to disperse pro-democracy protesters during an anti-government rally in Bangkok on October 16, 2020

About 3,000 demonstrators in the city’s main shopping mall district demanded the release of arrested activists, and some hurled obscenities about Prime Minister Prayut Chan-O-Cha.

Several hundred riot police advanced towards them in formation, calling on the protesters to go home or face water cannons.

A few meters away, hundreds of activists blocked the road behind a makeshift barrier, calling for the riot police to “get out!” and singing the Thai national anthem. 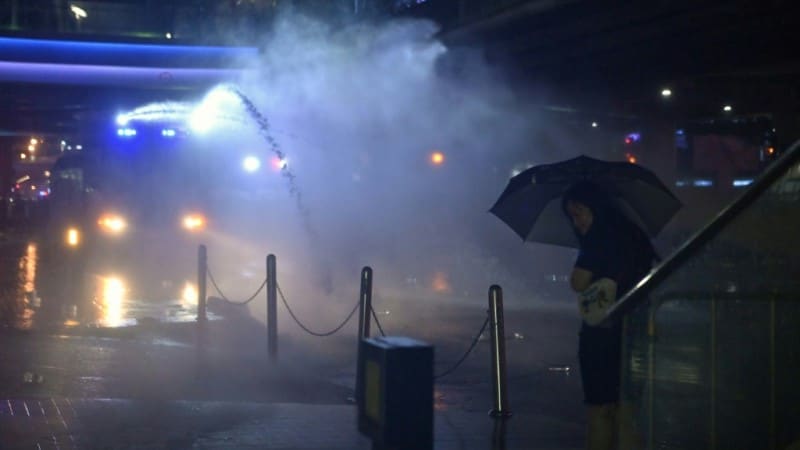 Police fired blue-dyed water laced with a chemical agent from the cannons, pushing back the protesters who used umbrellas to protect themselves.

Police later dispersed the protesters, but many vowed to return.

“Of course people will be back on the streets tomorrow. I will be there too,” said 21-year-old Nine, an engineering student. “The (use of force) will increase the numbers of protesters.”

“Protesters were repeatedly informed to stop the gathering, once the protesters failed to follow the orders there was a need to enforce the law,” deputy police spokesman Colonel Kissana Phathanacharoen told reporters, adding that blue dye water was used to mark protesters for further legal action.

Piya Tawichai, Metropolitan Police Bureau deputy commissioner said there were at least seven arrests but didn’t clarify how many occurred at the protest.

After the police press conference wrapped up, there was live footage on Facebook of a key protest leader Tattep “Ford” Ruangprapaikijseree being taken into custody.

“You have blood on your hands,” Ford told police as he was escorted from his accommodation. “You are supporting the dictator.”

Prachathai, a Thai news website, published footage of one of its reporters — Kitti Pantapak, 24 — being arrested at the protest. 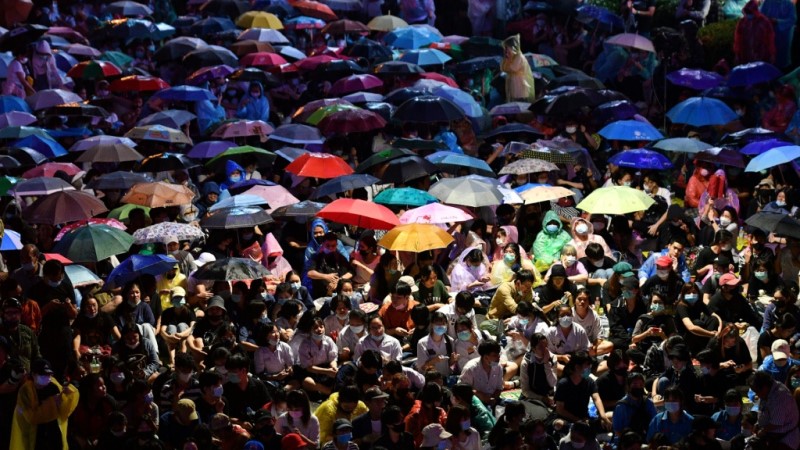 The kingdom’s political elite has been jolted by the youth-led movement that is demanding the government’s resignation and issuing a once-taboo call for reforms to Thailand’s powerful monarchy.

On Thursday, Prayut imposed an emergency decree banning gatherings of more than four people, but about 10,000 ignored the measure, demonstrating late into the night.

The government on Friday extended the emergency decree until November 13. 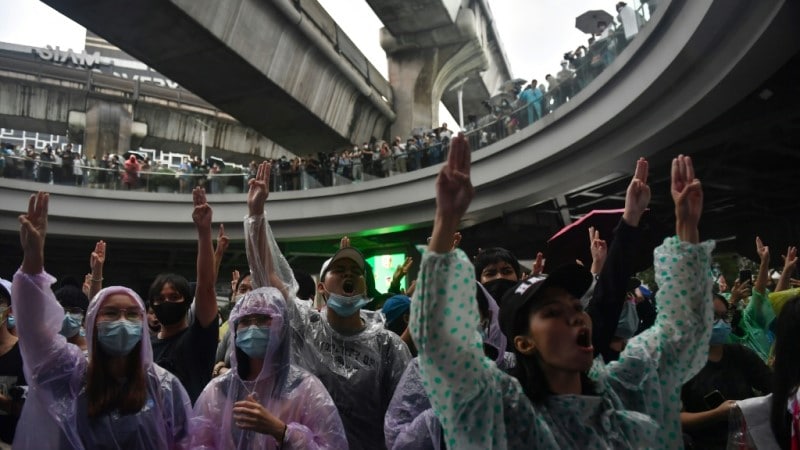 Earlier on Friday two activists were arrested under a rarely-used law banning violence against the queen.

Ekachai Hongkangwan and Bunkueanun Paothong were among protesters who crowded around a royal motorcade carrying Queen Suthida on Wednesday during a large demonstration near the capital’s government house.

In a Facebook broadcast Friday morning, Bunkueanun denied trying to harm the queen, insisting: “I am innocent. That was not my intention.”

Both men could face life in prison under a law that has not been used for decades and punishes any “act of violence against the queen or her liberty”.

It is not clear why the pair were singled out.

This is the first time such a serious charge has been leveled against pro-democracy activists, many of whom have already been hit with lesser charges, including sedition and breaking coronavirus rules on gatherings. 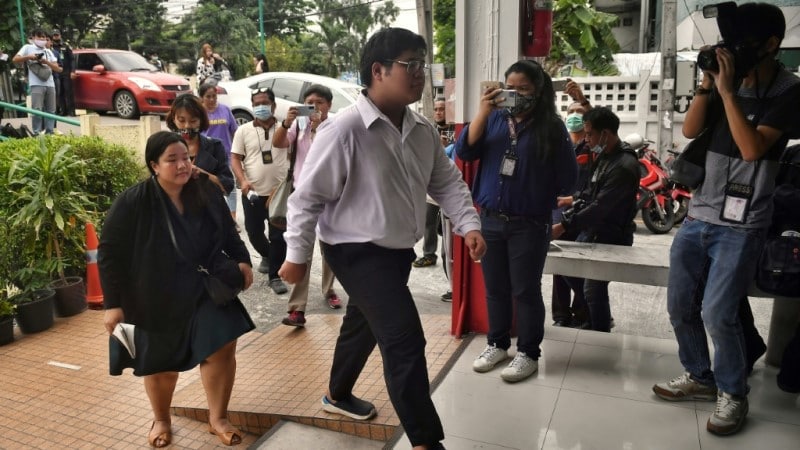 The protest movement’s demands include the abolition of a strict royal defamation law — which shields the monarchy from criticism — and for the royal family to stay out of politics.

Among the other top activists arrested Thursday was Panusaya “Rung” Sithijirawattanakul, whose detention was live-streamed on Facebook.

Anon Numpa, another leading activist, said he was forcibly taken by helicopter to Chiang Mai in northern Thailand.

His lawyer Krisadang Nutcharut told AFP that Anon had been refused bail and was being held in Chiang Mai prison.

“Keep on fighting! My freedom is a very small issue compared to the entire struggle for democracy,” Anon posted on Facebook late Thursday. 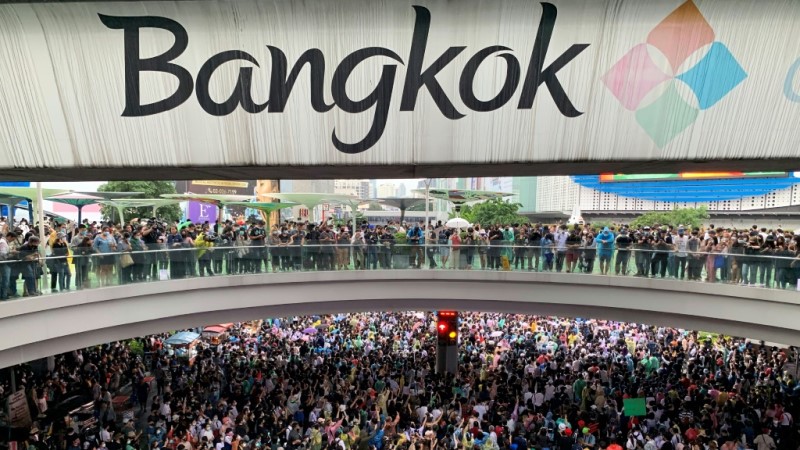 The opposition Pheu Thai party also called on the government to lift emergency measures, stop the harassment of protesters and free those detained.

Thailand’s modern political history is dotted with periods of violent civil unrest and more than a dozen military coups, the most recent of which brought Prayut to power in 2014.

Bangkok-based analyst Thitinan Pongsudhirak said the protest movement could heighten the chances of Thailand facing yet another military takeover.

“This endgame for Thailand‘s future has been building up for years, and it is finally here and now,” he said.