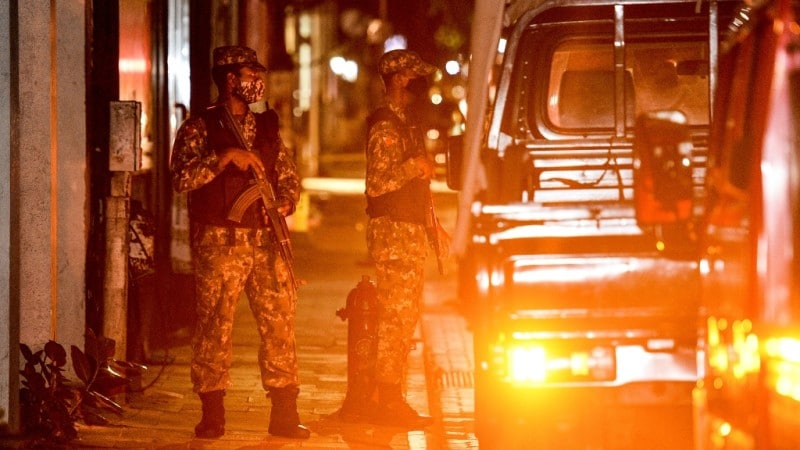 The Maldivian police Sunday arrested a third suspect in the attempted assassination of former president Mohamed Nasheed, officials said as a manhunt continued for others who may have been involved.

The 53-year-old democracy pioneer and climate activist was seriously hurt after a bomb attack in the capital Male on Thursday night that also injured a British national and two others.

Police have blamed the attack on “religious extremists” while doctors noted that the explosive device had been packed with ball bearings to cause maximum damage.

“We can confirm that a third individual has been arrested in connection with the May 6 attack early today,” police said in a statement.

They identified him as Adhuham Ahmed Rasheed, 25, from the islet of Thinadoo in the Vaavu atoll, about 75 kilometers (46 miles) south of Male.

He was arrested at dawn Sunday after police scoured CCTV footage on the archipelago’s one-square mile (two-square-kilometer) capital island.

Official sources said they believed Rasheed may have detonated the explosive device using a remote control.

Police also released CCTV footage showing him waiting at a narrow alley as Nasheed and his bodyguards walked by to a waiting car.

The bomb, rigged to a parked motorcycle, was detonated as Mohamed Nasheed was about to get into the vehicle.

The other two suspects in custody were Mujaz Ahmed, 21, and Thahmeen Ahmed, 32, who were both arrested Saturday.

Police said the three men in custody had criminal records.

Two experts from the Australian Federal Police (AFP) joined the investigation as local authorities appealed for more information about another man seen in the area.

There was no update from Nasheed’s hospital since it announced Saturday he was off life support and out of danger, but would remain in intensive care.

Family members said he was able to speak to close relatives on Saturday.

Nasheed underwent 16 hours of surgery to remove shrapnel from his body and doctors said one shard narrowly missed his heart.

There has been no claim of responsibility for the attack, but officials from Nasheed’s Maldivian Democratic Party (MDP) have alleged that religious extremists and political interests could be involved.

The Indian Ocean archipelago of 340,000 people is majority Muslim, and in October 2019 police arrested a suspected Islamic State recruiter accused of sending dozens of Maldivians to Syria.

The same man was accused of setting off a homemade bomb that wounded 12 Chinese tourists in Male in September 2007.

Nasheed ended decades of one-party rule in the Maldives and became its first democratically elected president in 2008, only to be toppled in a military-backed coup in 2012.

He is known internationally as a champion in the fight against climate change and rising sea levels that he says threaten to submerge the nation of 1,192 coral islands.