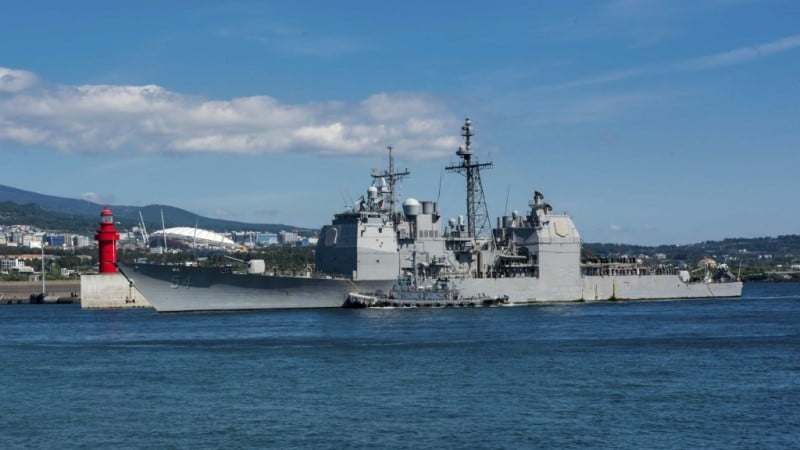 The US cruiser USS Antietam as it pulls in to port at the Republic of Korea naval base in Jeju, South Korea on October 12, 2018, after crossing the Taiwan Strait

US President Joe Biden is expected to announce his strategy toward China soon, and calls are growing for him to make a clear public commitment to defend Taiwan militarily in the event of Chinese aggression.

China considers Taiwan, which has a population of 23 million, to be a rebel province that will one day return to the mainland’s fold, by force if necessary.

The United States, which has diplomatically recognized Beijing since 1979, has maintained relations with Taipei and remains its most important military ally.

A US law requires Washington to help the island defend itself in the event of a conflict, but the United States has pursued a policy of “strategic ambiguity” for decades, refraining from clearly stating what circumstances would lead it to intervene militarily on Taiwan’s behalf.

The aim is two-fold: to avoid provoking Beijing, which might see this as a pretext for adopting a more aggressive policy towards Taiwan, but also to curb any desire on the part of the Taiwanese government to formally declare independence, which would set off a powder keg.

This ambiguity has allowed the United States to maintain a certain stability in the region. But in the face of China’s growing aggressiveness, some experts, such as the influential Council on Foreign Relations president Richard Haass, believe that “the time has come for the United States to introduce a policy of strategic clarity.”

Biden should “(make) explicit that the United States would respond to any Chinese use of force against Taiwan,” Haass said in an essay published by Foreign Relations magazine in September.

“Ambiguity signals to Beijing that there are questions over America’s commitment to the region, exasperated by four years of an America-first mantra that shrunk US leadership in the world,” Michele Lowe, a US Navy officer and current fellow at the Chicago Council on Global Affairs, said recently.

“Clarity provides the opposite.”

In recent months, the Chinese air force has increased incursions into Taiwan’s air defense identification zone. The US military fears a surprise invasion by China, and they, too, criticize the lack of clarity from the executive branch.

The former head of the US forces in the Indo-Pacific region, Admiral Philip Davidson, told Congress in March that China could invade Taiwan “in the next six years,” and that the concept of strategic ambiguity “needs to be reexamined.”

Two weeks later, Admiral John Aquilino — who succeeded Davidson — remained vague before US Senators about the timing of a possible Chinese invasion, but said he was prepared to discuss “the risks and rewards of a potential policy change” with Defense Secretary Lloyd Austin.

Other Biden advisers are more reticent, such as US intelligence director Avril Haines, who was asked last week about the impact of such a change during a hearing before the Senate Armed Services Committee.

“The Chinese would find this deeply destabilizing,” she said. “I think it would solidify Chinese perceptions that the US is bent on constraining China’s rise, including through military force, and would probably cause Beijing to aggressively undermine US interests worldwide.”

Additionally, she said, the Taiwanese government could be pushed to declare independence, especially since Beijing’s crackdown in Hong Kong has hardened Taipei’s position on the issue.

But Biden does not seem tempted to abandon all ambiguity, according to national security adviser Jake Sullivan.

“We continue in the footsteps of bipartisan consensus in US China policy going back decades, Democratic administrations, Republican administrations, and we oppose unilateral changes to the status quo,” Sullivan said last week during a conference organized by the Aspen Institute think tank.

“We have communicated that to China. We have affirmed that with Taiwan.”