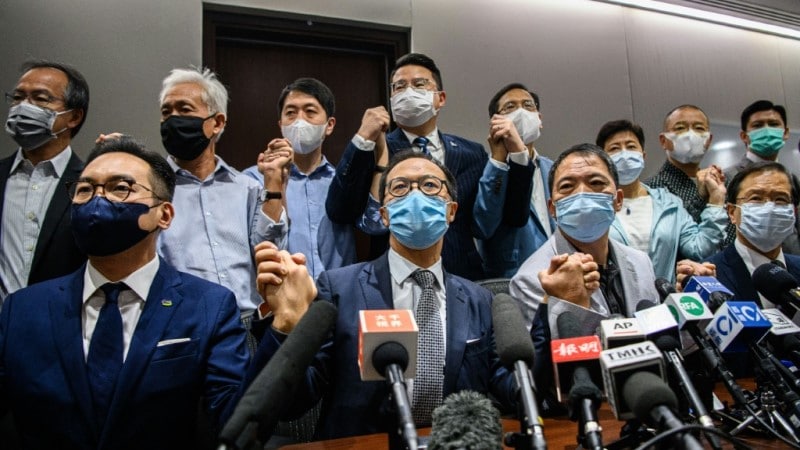 The four were disqualified in line with a resolution adopted earlier in the day by China’s parliament authorizing the local government to expel any politician it deemed a threat to national security.

The resignations will reduce the semi-autonomous city’s once-feisty legislature to a gathering of Chinese loyalists, effectively ending pluralism in the chamber.

They also mark another blow to Hong Kong’s beleaguered pro-democracy movement, which has been under sustained attack since China imposed a sweeping national security law earlier this year. 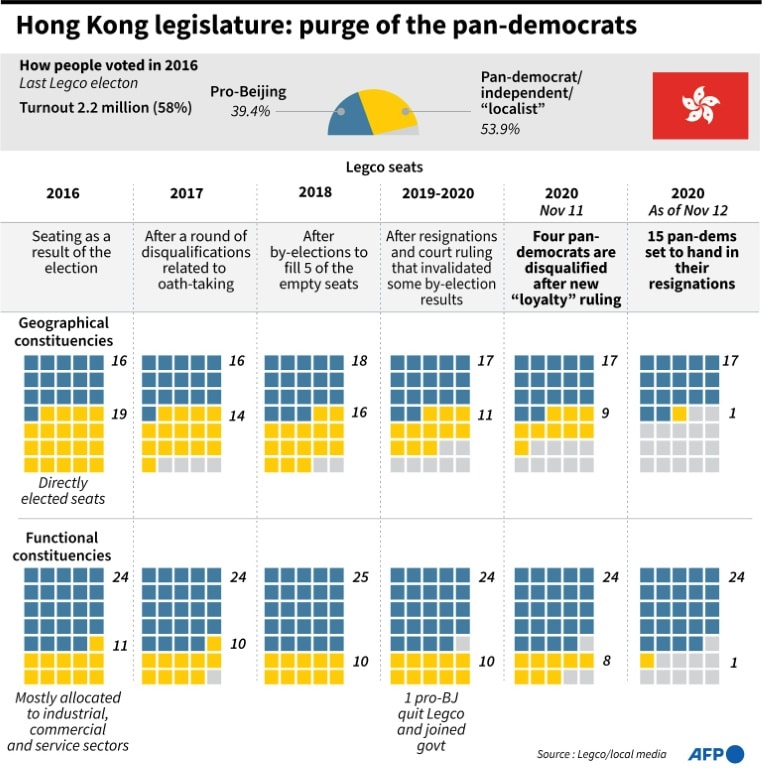 “We… will stand with our colleagues,” Wu Chi-wai, convener of the 15 remaining pro-democracy legislators, told a press conference.

“We will resign en masse.”

Earlier Wednesday, Hong Kong authorities ousted the four members just minutes after one of China’s top lawmaking committees ruled the city’s government could remove any legislator deemed a threat to national security without going through the courts.

Hong Kong’s leader is chosen by pro-Beijing committees, but half of its legislature’s 70 seats are directly elected, offering the city’s 7.5 million residents a rare chance to have their voices heard at the ballot box.

Scuffles and protests routinely break out, with the pro-democracy minority often resorting to filibustering and other tactics to try to halt bills they oppose.

China passed the sweeping security law in June to quell the protests, describing it as a “sword” hanging over the heads of critics.

“They would think that from now on, anyone they found to be politically incorrect or unpatriotic… they could just oust you,” she said.

“We are quitting this term, this legislature, we’re not quitting Hong Kong’s fight.”

International condemnation poured in of the move against the lawmakers.

“Once again, (Chinese President) Xi Jinping’s regime has demonstrated its total hostility to democratic accountability, and those who wish to stand up for it,” he said. 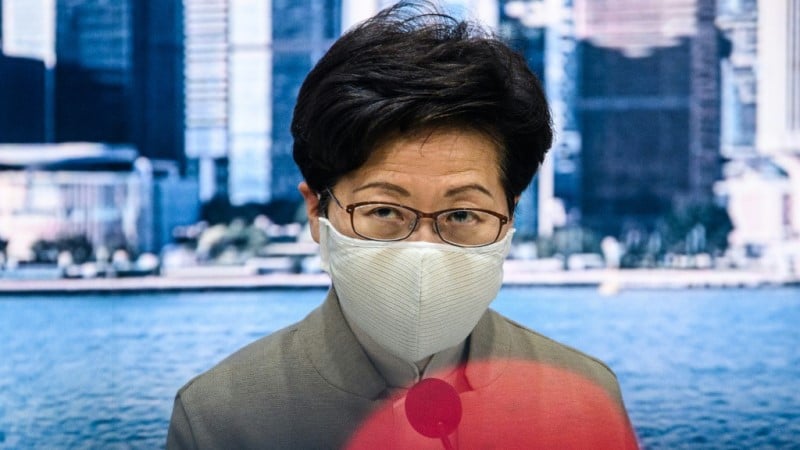 The disqualified lawmakers were defiant.

“If observing due process, protecting systems and functions and fighting for democracy and human rights would lead to the consequence of being disqualified, it would be my honor,” said Dennis Kwok, one of the ousted four.

The quartet had initially been banned from running in the city’s legislative elections — which were scheduled to be held September 6 — after calling on the United States to impose sanctions on Hong Kong officials.

Those elections were postponed, with authorities blaming the coronavirus.

A foreign ministry spokesperson in Beijing, meanwhile, said they were a “necessary measure in order to maintain the rule of law in Hong Kong”.

More than 10,000 people were arrested during more than seven months of protests, and the courts are now filled with trials — many of them involving opposition lawmakers and prominent activists.

Critics say the law’s broadly worded provisions are a hammer blow to the flickering freedoms that China promised Hong Kong could keep after the end of British colonial rule in 1997.