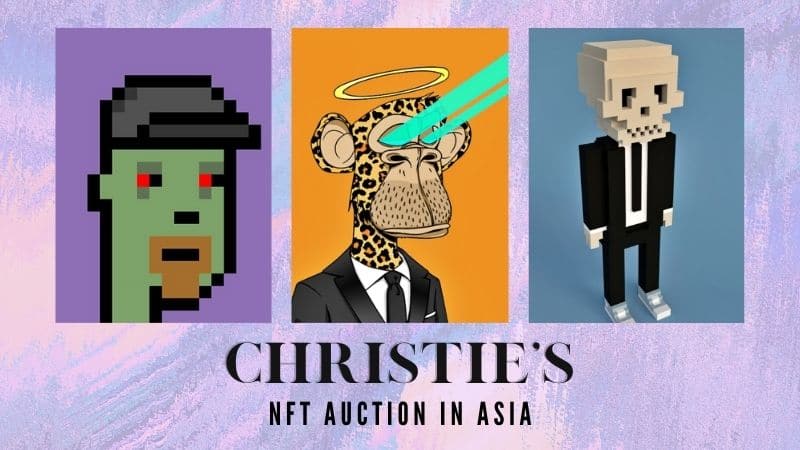 Auction powerhouse Christie’s is finally checking off a milestone many have waited for – its first major NFT auction in Asia. The company’s “No Time Like Present” auction will begin on September 17 and will feature works from Larva Labs, among other artists.

Christie’s is making history in crypto art with its first NFT auction in Asia entitled “No Time Like Present.” The auction will be based in Hong Kong, and it will run for 11 days starting on September 17.

According to the auction company, the momentous event will be the first auction that will make a non-fungible token or NFT sale in the continent. This is the first time most of the artworks will be sold outside an NFT-trading platform.

The collection of artworks will include profile-pic NFTs, which are unique digital avatars. Some examples include CryptoPunks, a series of pixelated portraits displayed on the Ethereum blockchain. The pieces were designed by Larva Labs, which is the brainchild of John Watkinson and Matt Hall. Each piece is made with unique algorithmically assigned characteristics like a Mohawk, an earring, or a goatee.

While the estimates are yet to be announced, Christie’s senior digital art specialist Noah Davis shared that it could be sold for a hefty price. One avatar traded by Larva labs fetched a staggering 1,500 ETH, which is roughly $4.7 million.

The avatars to be sold at Christie’s are expected to be even more expensive. This comes as no surprise considering a set of nine CryptoPunks were sold by $16.9 million – a far cry from its estimated $7 million to $9 million value.

Aside from CryptoPunks, the exhibit will also feature PFPs called Meebits. This is Larva Lab’s follow-up to CryptoPunks, which are also presented in lo-res characters. Unlike CryptoPunks, it shows the whole body, and it is rendered in 3D. One Meebits that is expected to be sold for a high sum is the skeleton wearing a Reservoir Dogs suit.

Moving to a New HQ

This auction marks a new beginning for Christie’s, which is set to move its Asia Pacific Headquarters to Hong Kong’s Murray Road in 2024. The new HQ will occupy a sprawling 50,000 square feet across four floors of The Henderson, a 36-story tower that is still under construction.