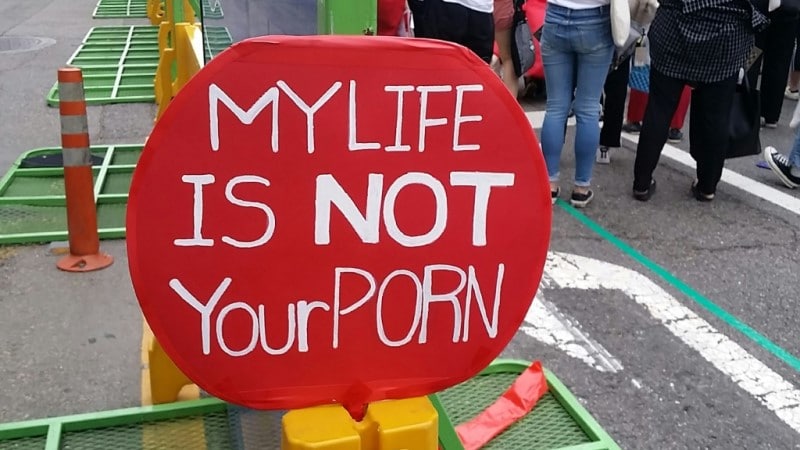 A placard at a protest against spycam pornography in South Korea. Women’s advocates have long argued that parts of technologically wired Asia have a particularly acute epidemic of digital sex crimes

People who take non-consensual photographs up a woman’s skirt face up to five years in jail in Hong Kong under a law passed Thursday aimed at tackling voyeurism.

The southern Chinese city is the latest jurisdiction to draw up laws specifically outlawing “upskirting” at a time when cameraphones have sparked an explosion of such images on the internet.

It includes voyeurism — recording others engaging in intimate acts where they have a reasonable expectation of privacy — as well as recording or publishing the intimate parts of others.

The latter offence would include upskirting, as well as taking non-consensual shots down a woman’s top.

The legislation only covers images that have been taken “dishonestly” or used “for sexual purpose” and applies to both public and private spaces.

The law also covers “deep fake” images — photos and films that have been digitally manipulated to place someone’s face on the body of another.

“We believe that the new offenses will help the public and frontline law enforcement officers to understand the irreversible harm done by image-based sexual violence,” said Linda S.Y. Wong from the Association Concerning Sexual Violence Against Women.

A small but growing number of countries have made upskirting a crime with specific legislation, including Australia, New Zealand, Germany and Britain.

South Korea in particular has been the focus of much attention after multiple women took their own lives after intimate images were uploaded online.