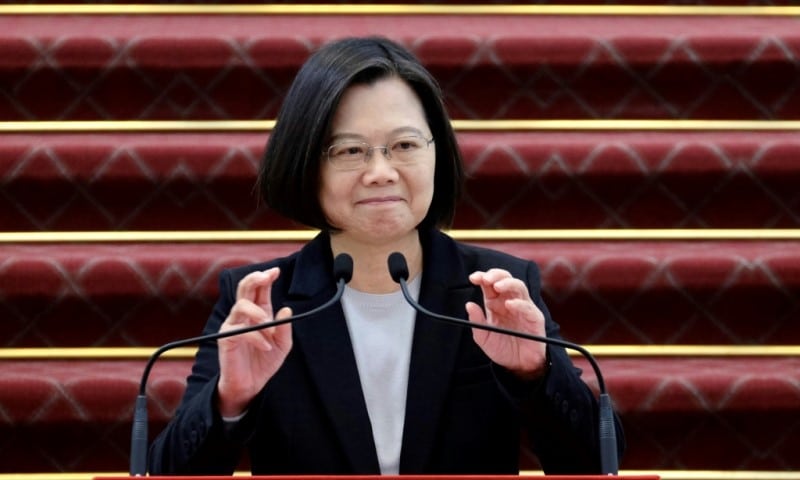 President Tsai Ing-wen of Taiwan, a self-ruled democracy of 23 million people that is claimed by Beijing’s leaders

The decision comes as Beijing remolds Hong Kong in its own authoritarian image and as local authorities turn the city’s RTHK news channel — run by a government agency — into something more closely resembling China’s highly censored state media.

In a memo sent to all staff on Tuesday that was obtained by AFP, RTHK’s management issued a series of new style rulings on how to refer to Taiwan.

The self-ruled democracy of 23 million people — known officially as the Republic of China — is claimed by Beijing’s leaders who have vowed to one day seize Taiwan, by force if needs.

The memo said staff were now banned from using “inappropriate” terms such as “Taiwan’s president” or the “Taiwan government” in all radio, television and online output.

“Inappropriate terminology such as ‘country’, ‘Republic of China’, ‘ROC’… must not be used when referring to Taiwan. Under no circumstances should Taiwan be referred to as a sovereign state or perceived as one,” it added.

The new ruling was made days after a prominent pro-Beijing politician in Hong Kong accused the broadcaster of breaking the law in how it describes Taiwan.

RTHK’s media office declined to comment on why the new rules had been rolled out.

Many international media outlets, including AFP, have style guides that say Taiwan should not be described as a country because the vast majority of nations do not recognize it as such.

However, it is not common to forbid references to the Republic of China, its president or its government.

Some media outlets have started to refer to Taiwan as a country given it is a de facto sovereign territory with its own elected executive, currency, borders and military.

Chinese state media go to great lengths to avoid any reference to Taiwan that might lend the island’s government any sense of legitimacy.

Taiwan is often referred to as “China’s Taiwan region” while President Tsai Ing-wen is usually dubbed a “so-called leader”.

The city has steadily slid down media freedom rankings since its return to China in 1997.

A recent crackdown after huge democracy protests two years ago has left many questioning whether the city can remain a press hub.

Mainland China maintains one of the most restrictive media regimes in the world.

Hong Kong’s RTHK was based on Britain’s publicly funded but editorially independent BBC.

Authorities have begun transforming the broadcaster after establishment figures accused it of being too sympathetic to the city’s democracy movement.

Many current affairs programmes have since been scrapped or pulled while multiple journalists have lost their jobs and shows or quit in protest at the changes.