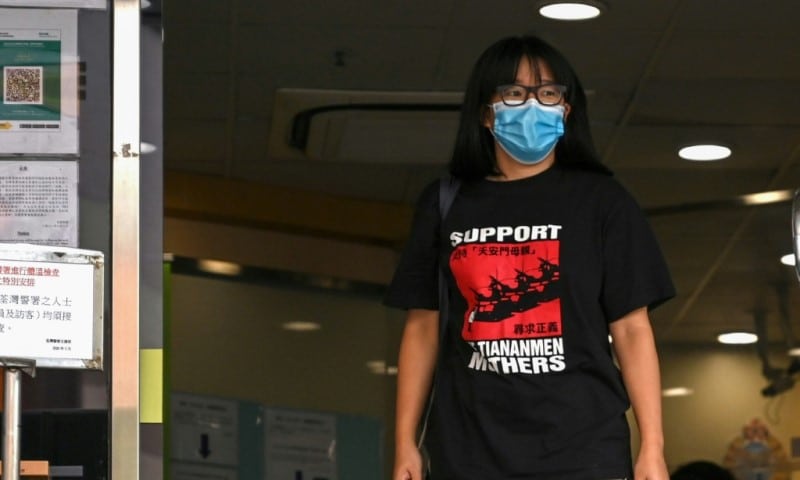 One of the organizers of Hong Kong’s annual Tiananmen vigil was charged with incitement Wednesday, the eve of another pair of politically sensitive anniversaries.

On Wednesday, police rearrested her and announced that she would be charged with “inciting others to knowingly join an unauthorized assembly” on June 4.

“We have learned that Chow Hang-tung was arrested around 5 pm today near her chamber,” Chow’s relatives and friends told reporters.

Chen Chi-cheong, a superintendent of the police, said that Chow had also been arrested for inciting others to join an unauthorized assembly on July 1, but declined to disclose further details.

He said she would be brought to a magistrate’s court on Friday.

The arrest and prosecution will keep Chow under police custody on July 1, the double anniversary of the city’s handover from Britain to China and the Communist Party’s centenary. An expected 10,000 police will be deployed across Hong Kong to prevent any public gatherings that violate pandemic restrictions, according to local media reports.

Chow was the legal representative for three democracy groups appealing a police ban on a July 1 march marking the 24th handover anniversary.

Authorities have rejected the appeal and warned the public not to participate in or advertise any unauthorized assemblies.

Chen denied that arresting Chow was a preventative move.

“We have all along been acting in accordance with the law,” he told reporters.

It is the second year in a row that Hong Kong police have banned the handover day rally, citing coronavirus restrictions.

Wednesday also marks one year since Beijing imposed a sweeping national security law on Hong Kong in response to huge — and often violent — protests in 2019.