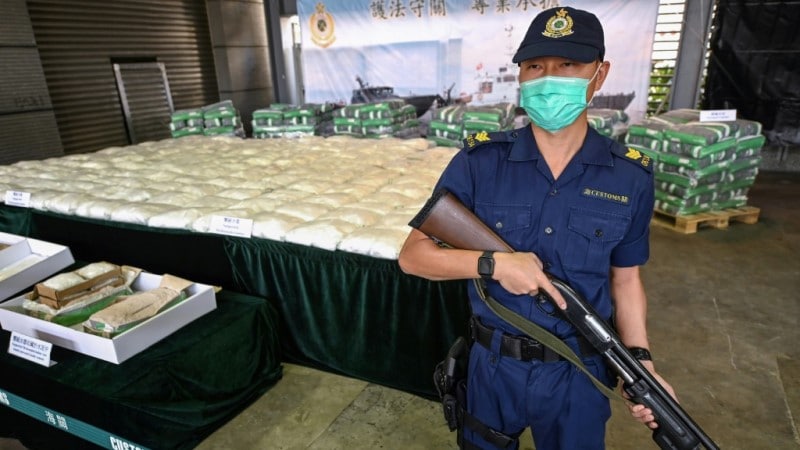 Hong Kong authorities announced a record seizure of over half a ton of methamphetamine on Monday, saying the coronavirus pandemic had led smugglers to riskier bulk shipments in place of traditional drug mules.

The crystal meth — reportedly worth around HK$300 million ($39 million) — was discovered last Thursday hidden in a shipping container with a declared cargo of cement bags, officials said.

The shipment was headed from Vietnam to Australia, but suspicions were reportedly raised by its unusual route.

The container originated in Mexico, went through South Korea and then remained in Vietnam for three months before sailing onto Hong Kong.

“We believe the traffickers were trying to avoid customs investigations and surveillance by designing such an extraordinarily circuitous route,” Barry Chu, head of the city’s Customs Drug Investigation Bureau, told reporters.

Chu said the pandemic, which has dramatically slashed international travel, has cut off one of the most reliable and expendable transport methods for drug cartels — the use of human “mules”.

“This year, due to widespread travel restrictions, most of the trafficking was carried out via freight transport, postal services and express delivery,” he said.

Most of the 244 kilos of meth Hong Kong customs had seized over the nine months before Thursday’s record haul was smuggled in this way, he added.

Australia is a major destination for methamphetamine, where it can sell for five times the street price in Hong Kong.

The heartland of Asia’s methamphetamine trade lies in the “Golden Triangle“, at the intersection of Thailand, Myanmar, Laos and southwestern China.

Production has soared in recent years, and record seizures across the region have failed to result in any high-profile arrests or impact street prices.

Law enforcement officials have documented the growing involvement of Mexico’s notorious cartels in Asia’s meth trade — a potentially powerful and ruthless competitor to regional drug networks who maintain a much less visible and less violent presence.

Hong Kong officials said no arrests have been made over last week’s record find, but investigators will share evidence with international law enforcement organisations.