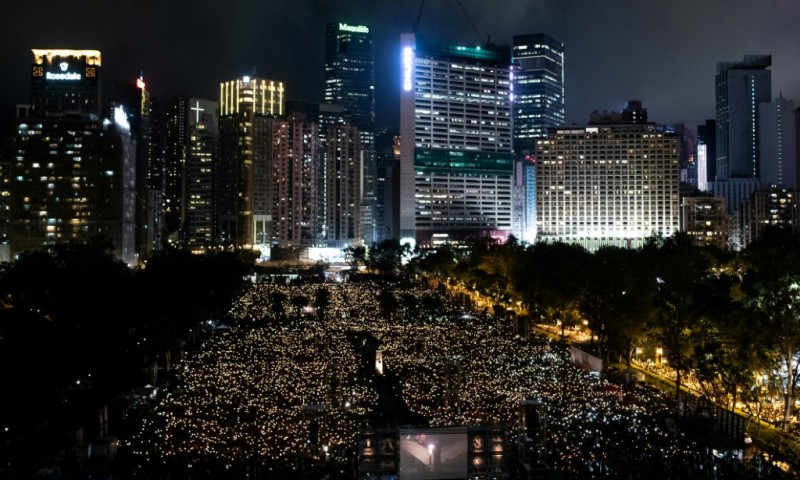 Hong Kong police on Wednesday arrested four members of the group behind the city’s Tiananmen Square vigils, a day after they refused to cooperate with a national security investigation.

The Hong Kong Alliance is the latest target of a sweeping national security law that China imposed on the city last year to quash dissent after huge and often violent democracy protests.

Prominent barrister Chow Hang-tung, vice-chairwoman of the alliance, was led away by security police in handcuffs from her office building in the city’s central business district.

Three other members of the group — Simon Leung, Sean Tang and Chan To-wai — were arrested on Wednesday morning, the alliance said in a statement.

Police confirmed that they arrested three men and one woman for “not providing information” according to the national security law.

The alliance is one of several pro-democracy groups being investigated by the city’s newly created national security unit.

British Foreign Secretary Dominic Raab tweeted: “Today’s arrests of members of the Hong Kong Alliance are another chilling demonstration of how the National Security Law is being used by Beijing to dismantle civil society and stifle political dissent in Hong Kong.”

Last month, police ordered the group to hand over financial and operational details, accusing it of working as a “foreign agent”.

The request included the personal details of all members since its founding in 1989, all meeting minutes, financial records and any exchanges with other NGOs advocating for democracy and human rights in China.

On Tuesday, the deadline for them to hand over the information, members of the alliance handed police a letter saying the request was illegal, arbitrary and that no evidence of their wrongdoing had been presented.

The alliance also rejected the accusation that they are foreign agents, saying they are a domestic group that campaigns for Hong Kongers.

The arrests prompted a rare statement from Beijing’s secretive national security office in Hong Kong, which took over a state-owned hotel shortly after last year’s law was enacted and is currently building a permanent headquarters in the city.

“Anyone who has violated the national security law of Hong Kong and other laws of Hong Kong must be punished by the law,” the office said.

That office has only issued two previous such statements — following the arrests of media tycoon Jimmy Lai and law professor Benny Tai — even though more than 120 people have been arrested under the security law.

China is currently remolding Hong Kong in its own authoritarian image.

Dozens of democracy figures — including multiple alliance members — have been arrested on national security charges and an official campaign has been launched to purge the city of anyone deemed “unpatriotic”.

Films are now censored for political content, curriculums have been rewritten, dissident artists and pop stars are unable to find venues, and dozens of civil society groups have disbanded.

Former Hong Kong lawmaker Nathan Law, a democracy campaigner who fled to London after the imposition of the security law, said the arrests were “absolutely absurd and unacceptable”.

“Even before a trial begins, Hong Kong Alliance is presumed guilty. It completely violates the presumption of innocence in the past,” he said.

The alliance, officially named the Hong Kong Alliance in Support of Patriotic Democratic Movements of China, was once one of the most visible symbols of the city’s political plurality.

Each June 4, the day of China’s deadly Tiananmen Square crackdown in 1989, it organized large candlelight vigils in Hong Kong’s Victoria Park that were routinely attended by tens of thousands of residents, with crowds swelling in recent years as anger intensified over how Beijing was running the city.

Slogans at the vigils often called for democracy in China and an end to one-party rule.

Tolerance for such political defiance has since ended, especially after rising anger towards Beijing’s rule exploded with 2019’s months of protests.

The last two Tiananmen vigils were banned by police and city officials earlier this year shuttered a museum operated by the alliance.

Authorities in China and Hong Kong have also said that future vigils would likely break the new security law.

by Su Xinqi and Yan Zhao/afp