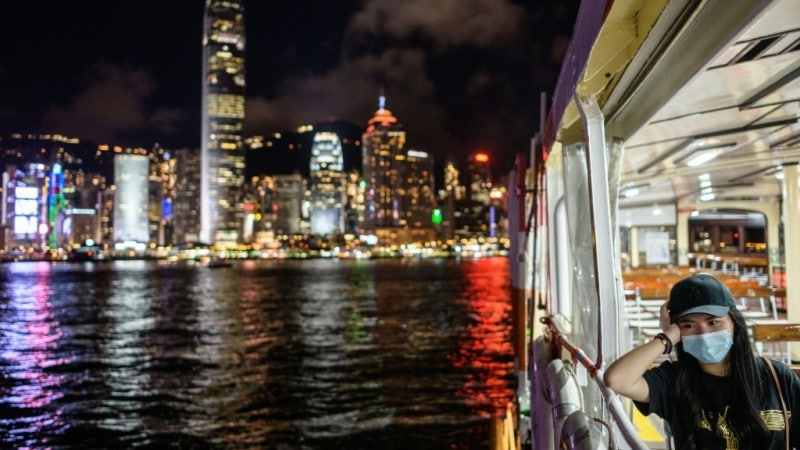 Beijing has said the law will restore stability in Hong Kong

The law targets four types of crime: subversion, secession, terrorism and colluding with foreign forces — with up to life in prison.

Beijing has said it will restore stability after last year’s huge and often violent pro-democracy protests.

But the law has also hastened the unraveling of Hong Kong’s political freedoms and autonomy, supposedly guaranteed for 50 years after the 1997 handover from Britain.

Here is how the city has changed since the law came in.

The legislation was quick to achieve one of its main aims — ending the protests.

The first arrests came on July 1, the anniversary of Hong Kong’s return to China and just one day after the law was enacted.

As crowds defied a ban on protests, police moved in. Most of those arrested under the new law were carrying or shouting pro-independence and pro-democracy slogans.

Another visible imprint of last year’s protests also came down. So-called “Lennon Walls” — murals of pro-democracy art and messages erected in many shops and cafes, and on roadsides — were widely removed.

No large-scale protest has broken out since July 1.

Hours before the law came in Demosisto, a pro-democracy party founded by former student activists including prominent dissident Joshua Wong, announced it was disbanding.

Nathan Law, a prominent member and former legislator, then fled to Britain.

A number of smaller political groups, some of whom advocated independence or greater autonomy, also announced they were shutting down.

Beijing said it would have jurisdiction over especially serious security cases and allowed its agents to operate publicly in Hong Kong for the first time.

The declaration toppled the legal firewall that has existed between China’s party-controlled courts and Hong Kong’s judiciary since the handover.

China’s agents moved into a new office housed in a luxury hotel that was requisitioned from a state-owned tourist company.

The law also created a new security unit within Hong Kong’s own police force. They were handed much broader surveillance powers and the ability to censor or remove online posts.

Beijing has made no secret of its desire to rein in schools and universities, which it sees as having played a vital role in the 2019 protests.

The security law has helped — schools and libraries pulled books deemed to be in breach of the new law.

The city’s education chief also banned any protests inside or outside schools.

On Tuesday, law professor Benny Tai was fired from the University of Hong Kong over a conviction for leading past peaceful protests.

He accused university chiefs of bowing to pressure from Beijing and declared “the end of academic freedom in Hong Kong”.

As the law came in many Hong Kongers announced they were either leaving social media or scrubbing their accounts of critical content.

On Wednesday the newly created Hong Kong police unit made its first arrests — four students aged between 16 and 21 — who had allegedly written social media posts that breached the new security law.

The unit said the group had recently declared the establishment of a body to promote independence and build a “Republic of Hong Kong”.

On Thursday officials disqualified 12 candidates from standing for election in the city’s legislature in early September — including four sitting members.

Authorities declared their political views were unacceptable, printing a list of stances that would lead to disqualification.

Among those disqualified was Joshua Wong, who decried “the biggest-ever crackdown” on the city’s democracy movement.