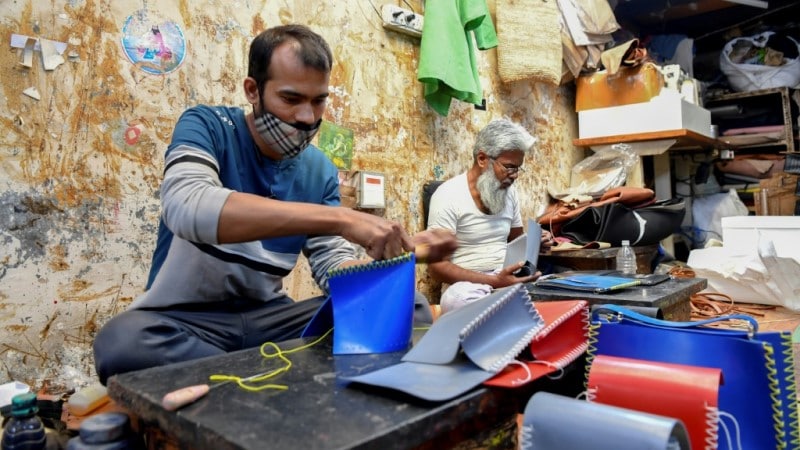 The sound of men punching holes into colorful rubber sheets reverberates across a tiny studio in India’s largest slum — an unlikely birthplace for luxury handbags made by a marginalized community seeking to reclaim its identity.

“Chamar Studio” owes its name, derived from the Sanskrit word for ‘skin’ and long used locally as a slur, to leather craftsmen who lie at the bottom of the Hindu caste hierarchy.

As members of the Dalit caste, formerly known as untouchables, life has always been a struggle for India’s leather workers, who are largely Hindu Chamars or Muslim.

Then came Prime Minister Narendra Modi’s war on beef consumption, which destroyed their livelihoods by cutting off access to raw materials. 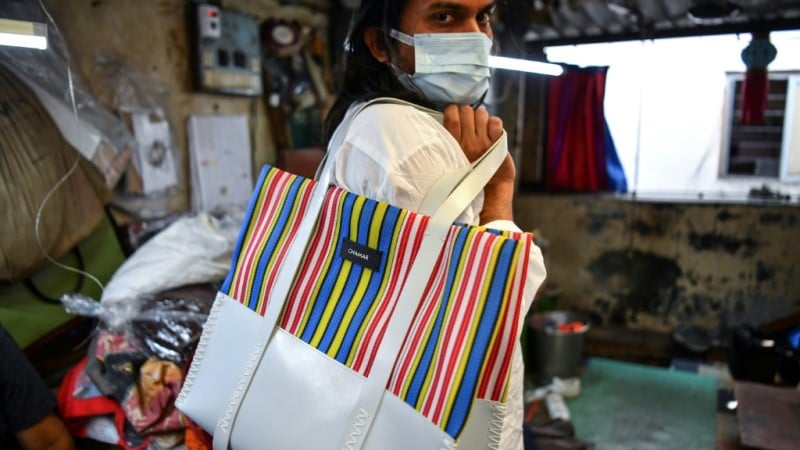 Founder of ‘Chamar Studio’, Sudheer Rajbhar poses as he shows his bags made from recycled rubber

It also raised the threat of lynchings by so-called cow vigilantes — Hindu hardliners fighting to protect the animal they deem sacred.

“Chamars have been oppressed for so long,” the brand’s founder Sudheer Rajbhar told AFP.

An artist by training, Rajbhar — who is lower-caste though not Chamar — sought to offer the community a new lease on life by designing minimalist handbags made of recycled rubber — a sustainable substitute for leather.

Such a Weird Name

But first he had to weigh the legal risks, after India’s Supreme Court banned the “highly offensive word” in 2008 over its widespread use as a term of abuse.

Then he had to convince the community, with many craftsmen fearing the potentially incendiary — and loss-making — implications of marketing a luxury product with lower-caste associations.

“I thought it was such a weird name for a brand,” said Rahul Gore, who faced discrimination while growing up in a village 300 kilometers (190 miles) from Mumbai.

“We were allowed to play with upper-caste children but their parents would not allow us to visit them at home or share food. I used to feel very bad about it,” Gore, now 35, told AFP. 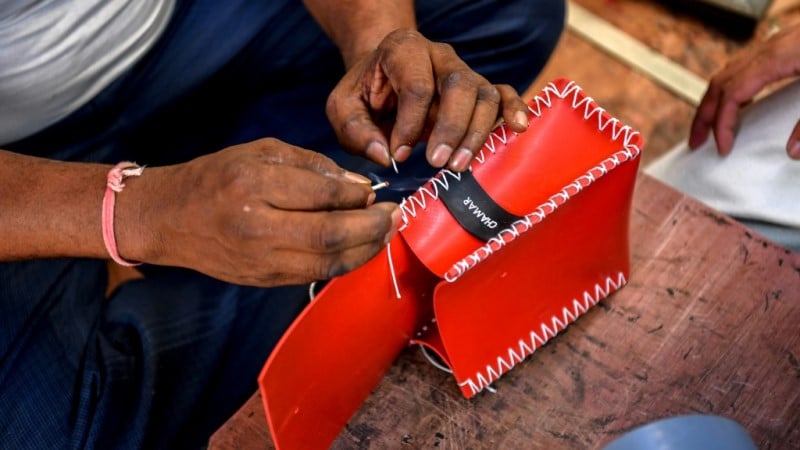 The use of rubber instead of leather meant that virtually every step — from the cutting to the stitching — needed to be performed by hand rather than with sewing machines.

The absence of tanning and the use of organic colors to dye the bags in the brand’s signature hues of cobalt blue, red and emerald green make the process much less toxic for workers, said Rajbhar.

The purses are so durable they can even withstand a spin in a washing machine, he added.

I Get More Respect

Rajbhar used his savings and bank loans to invest around one million rupees ($13,700) into launching the brand in 2017, turning to local cobbler Sachin Sakhare for help in training craftsmen.

Sakhare started working on Mumbai’s crowded pavements as a 13-year-old when his father, also a cobbler, was killed in a hit-and-run accident.

He told AFP he wanted to “improve the lot of my people”.

“The caste system has created so much discrimination that people just don’t respect certain types of work,” said Sakhare, who used to earn 400 rupees a day as a cobbler.

The father-of-two now leads a team of Chamar and Muslim craftsmen making unisex totes, shoulder bags and clutches, and says his sense of self-worth has expanded.

“Now that I get more respect (for my work), I feel more like an artist”, he added.

The purses don’t come cheap, with prices ranging up to 39,000 rupees for an intricately woven oversized tote that takes a day to make.

Customers have not balked at the cost however, with the bags stocked at high-end boutiques in Mumbai and Frankfurt as well as the brand’s own online store.

But the company is confronting new challenges, with sales down since the pandemic.

Many craftsmen remain fearful about returning to Mumbai, the Indian city hit hardest by the coronavirus.

Although Rajbhar’s Chamar Foundation has managed to support the families of his employees during India’s months-long lockdown, his colleagues worry for the future.

“Why would anyone buy handbags when they are worried about running their households?” mused Sakhare, who also works as a sweeper to pay the bills.

Still, he refuses to give up hope.

“I never imagined we would make a difference to society,” he said.

“It feels really good to tell the world that we are Chamar and we are artists.”