Asian Celebs You Can Hire for Your ‘Cameo’ Right Now 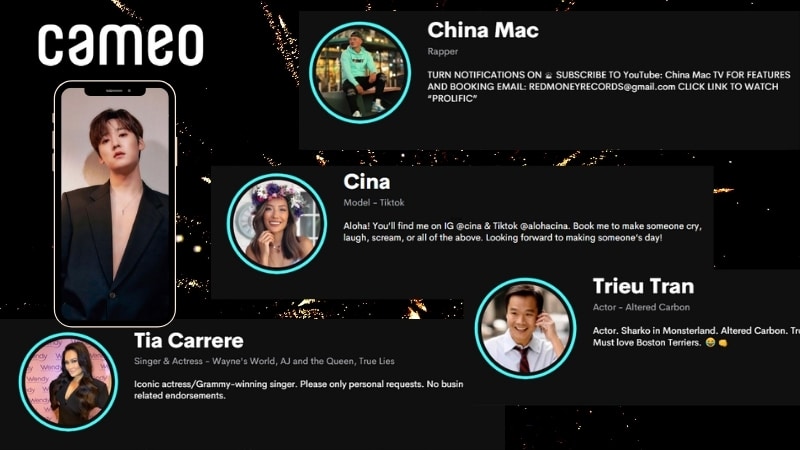 If you’re a big celebrity follower, you’ve probably heard about Cameo. This platform has been expanding access to celebrities since 2017. This pandemic, Cameo has exploded in popularity and more Asian stars have joined its ranks. If you’re curious about the top Asian celebs on Cameo, keep on reading.

Cameo is the easiest and ultimate way to hire a celebrity or influencer to surprise your friends and family. With thousands of celebrities on the platform and millions in funding, the startup has been increasing in popularity. And chances are, your favorite celebrities are on it too. We’ve gathered some Asian personalities who are part of the shout-out platform.

Raymond Yu, known by his rap name China Mac is one of the freshest New York hip-hop artists and activists today. The artist uses his fame and platform to rally against xenophobia and anti-Asian stigma in the US. The 38-year-old used to be a member of the Ghost Shadow Gang, and throughout his life, he has locked horns with the law. Now, though, he continues to fight but using his words as he is continuing to make his mark in the country’s hip hop scene.

Born in Vietnam, Trieu Tran is one of the most talented Asian artists today. He acts on stage, screen, and television. Tran immigrated to Canada when he was young, but he was raised in Massachusetts. He has appeared in Oedipus the King, Hancock, Tropic Thunder, and most recently, Hulu’s Monsterland. And if you are lucky, he might just include his beloved pooch ‘Captain’.

Filipino-American Tia Carrere grew up in Hawaii and rose to fame after being part of cult-favorite Wayne’s World. The television and film actress has also appeared in Dancing with the Stars in 2006. Aside from being an actress, she is also a singer and has even reaped two Grammy Awards for her music.

If you’re a fan of the tv show Terrace House, you’ll be delighted to know that you can get a personalized greeting from Eden Kai on Cameo. The musician has captivated tons of fans around the world because of his guitar and ukulele skills. Kai has also performed at the iconic Fuji Rock Festival, which is the largest outdoor music festival in Japan. The star charges $150 for every video.

If you’re a fan of viral videos, then you’ve probably heard about Dr. Pimple Popper. The dermatologist’s videos have amassed millions of views on her social media channels thanks to her gross yet highly addictive pimple-popping videos. Whether you want to see blackheads or cysts, she probably has a popping video of it. The doctor charges $250 per cameo, we are not sure if ‘popping’ will be included.

Another Asian personality you can find on Tiktok is Youtuber Emmy Cho, aka ’emmymadeinjapan’, armed with almost 3 million subscribers, . The Chinese-American influencer is based in Rhode Island and is known for her delectable cooking videos of foods from various countries. Emmy only requests $50 for every video.

Hardcore k-pop fans may still remember Kevin Woo from U-Kiss. The Korean-American singer-songwriter was raised in California but is now based in Japan and works as a television host and actor. Despite retiring from the Kpop industry in 2017, he still has a lot of fans from around the world.

Get These Celebs to Send You Videos

Cameo has made it easier for people to receive personal shout-outs and greetings from celebs. If you’re planning on requesting a video, just make sure to be as specific as you can with your instructions. Seventy-percent of your payment will go straight to the celebrity, and Cameo gets 25 percent of the cut.