Coachella is the festival of festivals – no doubt about that. The two-week event based in Indio, California gathers thousands of fans all over the world (thankfully with no more flower crows!) each year to celebrate music and global talent. The headliners this year are Travis Scott, Frank Ocean, and Rage Against the Machine.

Since K-pop royalties BLACKPINK made their Coachella debut last year, Asian music fans have been looking out for the 2020 lineup. Although Jisoo, Lisa, Rosé, and Jennie won’t be returning this year, Asian music fans still has a reason to get passes for the two-weekend event. Mark your calendars and take note of these Asian performers in this year’s Coachella happening on April 10 to 12, and April 17 to 19

After taking some time off for their mandatory military service, the Kings are finally making their long-awaited comeback! In Coachella 2020, no less. The group which includes T.O.P, G-Dragon, Daesung, and Taeyang will be performing without retired group member Seungri. This will be the group’s first performance since December 2017.  BIGBANG is one of the most successful K-pop groups since they debuted in 2006. The members’ rebellious and bold personal caught the attention of the global markets.

Just in time for the new decade, the first-ever Vocaloid Pop Star is set to conquer Coachella this year. The performer may not be the first holographic performer on the festival stage, as the honor already belonged to Tupac in 2012. However, this set by the Japanese performer is iconic in its own right.

First released in 2007, Hatsune Miku’s name translates to “first sound of the future.” Her voice was modeled after Saki Fujita, and she sings through text commands. Over 100,000 songs have been created for the turquoise-haired star, with 4,000 sold through Karent.

Not the first for the globe trotting DJ, with Peggy Gou’s fail-proof combination of charm and talent, fans have predicted that it would only be a matter of time before she would be invited again to Coachella. The South Korean DJ and fashion designer is delighted to bring her set to festival-goers with her hits such as Starry Night, It Makes You Forget, and Han Pan.

The artist, who recently became viral after picking up trash in Bali in between playing for the biggest bars during her Bali vacation initially planned to reduce her gigs this year. Thank heavens she did not let this pass or her fans would definitely be bawling.

Another DJ who will be bringing life to Coachella’s is Tokimonsta. The LA-based Korean-American artist has worked with the biggest names in the industry such as Duran Duran, Beck, and Anderson Paak. Just last year, her album Lune Rouge was nominated for the Grammy Award for Best Dance/Electronic album, making her the first Asian-American producer to do so.

It’s tempting to think Tokimonsta has had it easy. However, the musician recently went through a heavy hurdle after she was diagnosed with Moyamoya disease that sends blood to the brain in 2015. After two brain surgeries, she has bounced back and has regained the ability to create music again.

First time in Coachella history, two Indonesians will be playing in the festival, and one of them is Rich Brian. The nasi-goreng loving rapper who has collaborated with Migos and Skrillex became viral after he adapted his alter-ego Rich Chigga. Represent by 88Rising,  the 20-year-old artist is one of the most influential Asians shifting pop culture’s landscape.

With this unmistakable flair and confidence, it’s hard not to miss his lovable personality and musical prowess. As he takes on topics like his Indonesian heritage, there is no stopping him on his rise to stardom.

A pleasant surprise in this year’s lineup, rising Indonesian singer Nicole Zefanya, known by her stage name NIKI, is about to take her old soul into center stage. The singer is famous for her alluring beats and soulful lyrics that will make you think she was a poet trapped in a young girl’s body. Having worked with Taylor Swift and Halsey, the vintage soul is about to make her name for herself starting with her Coachella gig.

Known as the Princess of J-pop, Kyary Pamyu Pamyu is probably this year’s most kawaii Coachella performer. The global icon is one of the most celebrated Asian artists and cultural advocates. She is even one of Warner Music Group’s top sellers, alongside Ed Sheeran and Coldplay. The 25-year-old musician has popularized hits such as Ponponpon, Kira Kira Killer, and Crazy Party Night.

If you’re going to Coachella, make sure to get ready for a soulful experience during Raveena’s set. The singer was raised in Queens, NY with Indian roots, which shines through her music. Her angelic voice is hard to miss in her hits such as Sweet Time, I Won’t Mind, and Honey.

Spectators are expected to hear her new release, Headaches, which aims to remind people of the dizzying feeling that comes with being crazy in love with someone.

South Korean alternative hip hop group Epik High is one of the continent’s most revolutionary force in the genre. Its members Mithra Jin, Tablo, and DJ Tukutz have released 11 successful studio albums since 2003. Since the start of their career in the early 2000s, the hip hop crew has been constantly releasing songs with diverse and relevant themes. The independent group is making a name for themselves both in the South Korean mainstream music business, while still garnering respect from the underground scene.

Fans of Japanese singer and songwriter Joji will be looking forward to his Coachella gig. The musician whose first claim to fame was on YouTube broke into the music scene with Ballads 1, his first studio album. He is known for his eclectic music which is a fusion between trap and R&B.

Filipino-British singer Beabadoobee has been on the sights of music fans since her debut thanks to her nostalgic tracks that seem to revive old indie-pop with a hint of bubblegum pop and grunge. Just three years after she wrote her first song in her bedroom entitled Coffee, she has been widely featured in the music industry. Aside from her Coachella performance, fans can also catch the freckled-face artist on The 1975 Music for Cars Tour (UK leg) and Notes on a Conditional Form North American tour.

Coachella is known for having a keen eye on underrated artists, and they hit the jackpot with Japanese-American singer and YouTuber Conan Gray. The 20-year-old artist has been making headlines after he released his song “Idle Town,” an an ode to Georgetown, Texas, his hometown. With millions of views on YouTube, he’ll surely be one of this year’s most anticipated performances in Coachella.

Bangladesh-born electronic music producer Sajeeb Saha or Jai Wolf has been dedicated to making music since 2011. However, it wasn’t until 2014 until he was known as Jai Wolf. With remix projects for Alesso, Melanie Martinez, and Odesza, the DJ has consistently landed on top of the Hype Machine’s list. His talent was event noticed by Skrillex and turned his bootleg “Ease My Mind” remix into an official one. This is his 2nd performance in Coachella.

Korean-American producer, singer, and rapper Yaeji has been turning heads in Brooklyn for years thanks to the loud bass that she makes wherever dance club she chooses to play for the night. Her tracks such as Raingurl clearly shows her distinct, angular, and somewhat melodic voice quality.  Don’t mistake her for just another house singer though, her lyrics are not only catchy, but also relevant as she discusses topics like anxiety, therapy, and her Korean identity.

COACHELLA has been rescheduled due to Virus Concerns 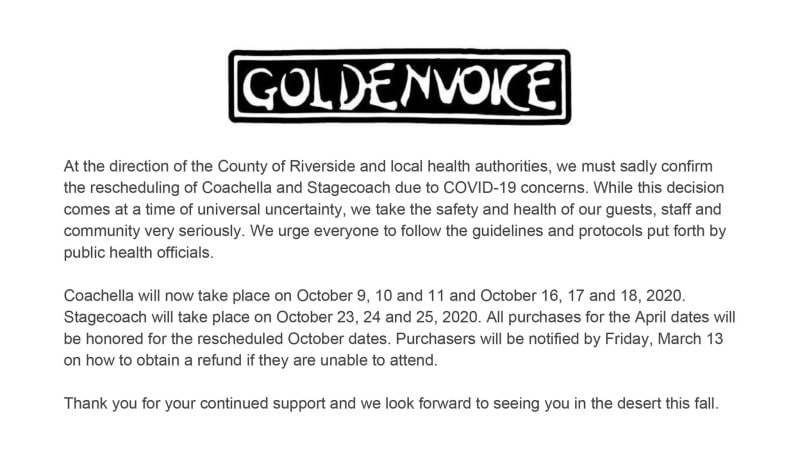