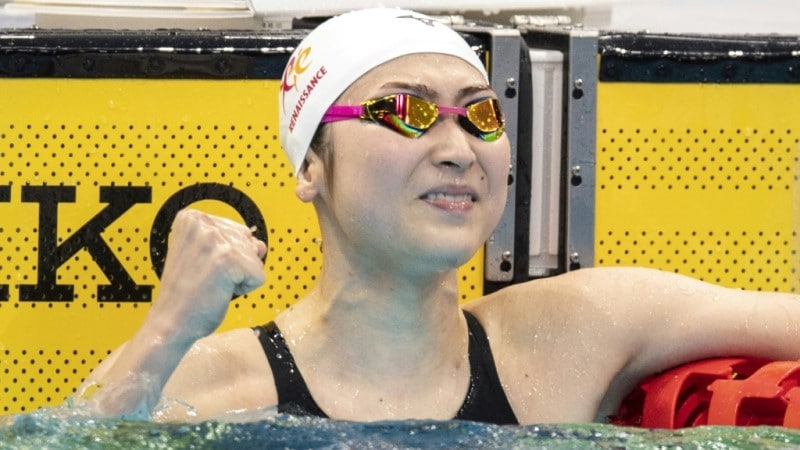 Ikee, who only resumed training in March last year after being hospitalized for around 10 months, won the 100-metre butterfly race at Japan’s Olympic trials in Tokyo

Japanese swimmer Rikako Ikee said she “didn’t know what had just happened” after qualifying for the Tokyo Olympics medley relay on Sunday, just two years after being diagnosed with leukemia.

Ikee, who only resumed training in March last year after being hospitalised for around 10 months, won the 100-meter butterfly race at Japan’s Olympic trials in Tokyo in a time of 57.77 seconds.

That was not enough to earn her an individual spot at the coronavirus-delayed Tokyo Games, but it did make her eligible for Japan’s relay team, capping an incredible comeback for the 20-year-old.

“I was really happy but also really surprised,” said Ikee, who was in floods of tears as she addressed the crowd after the race.

“I didn’t know what had just happened. It was a feeling I had never experienced before.”

Rikako Ikee had downplayed her chances of appearing at the Tokyo Games after resuming racing in August last year, claiming she was focused on Paris in 2024 instead.

But she reached her goal ahead of schedule, admitting after the race that she “thought it would be much later that I would be able to start winning.”

“I felt I was swimming pretty well in my first qualifying race yesterday, but then in the semi-finals I had the tiredness of swimming in a second race,” she said.

“I could hardly move in the second half of the semifinal. Today was just a one-off, so I wasn’t so worried about that.”

Ikee missed a place in the Olympic 100-meter butterfly competition after failing to meet the 57.10-second qualifying time.

But she will have other chances to clinch an individual spot this week at the Japanese trials, and is set to appear in the 50m and 100m freestyle.

“I didn’t think I had a chance in the butterfly at all,” she said. “I thought if I was to get in, it might be the 100m freestyle relay.

Ikee was named MVP of the 2018 Asian Games after claiming six golds and two silvers.

She won the 50m butterfly at the Tokyo Open in February to claim her first victory since she started her comeback.

“I thought it would be a while before I was able to compete in the 100m butterfly, but I was looking at it like, even if I did lose this year, I wouldn’t lose next year,” said Ikee, who finished 0.41 seconds ahead of Suzuka Hasegawa.

Elsewhere at the Japanese trials, Waka Kobori and Miyu Namba both clinched a spot in the Olympic women’s 400m freestyle competition after meeting the qualifying standard of 4:07.10.

Nineteen-year-old phenom Shoma Sato won the men’s 100m breaststroke in a time of 59.30, but failed to meet the qualifying time of 59.21.

His time made him eligible for a spot on Japan’s medley relay team.

Sato recorded a 200m breaststroke time of 2:06.78 earlier this year — the fourth-fastest in history.