What These Asian Celebrity Chefs are up to at the ‘Moment’ 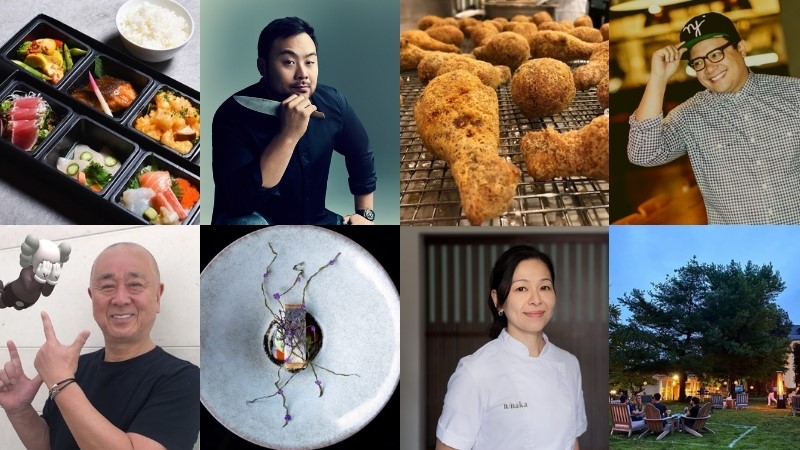 Restaurants and travel remain the hardest-hit industry by the Covid-19 Pandemic.  Despite these challenging times, some of the most recognizable Asian chefs in the industry are keeping up the pace and moving forward. Let’s see what they are up to.

Saitama-born chef Nobuyuki Matsuhisa, famously known as Nobu, owns an impressive chain of restaurants named after himself all over the globe. The chef has taken Japanese cuisine to new heights and has become a favorite of Robert DeNiro, Bon Jovi, Cindy Crawford, among other celebrities. Madonna even said you can tell how much fun a city is going to be if Nobu has a restaurant in it.

Due to the pandemic, his restaurants closed their doors to the public to protect the safety of their employees and the public. But now, you can finally treat yourself with the “Nobu To-Go” for takeout and delivery on some branches. The restaurants also offer special menu items such as sushi and sashimi set, and classic dinner which includes spicy tuna cut roll, yellowtail and whitefish sushi, black cod miso, and chicken or beef Nobu style and edamame.

If you are looking for an exquisite dining experience at the comfort of your home, try our Classic Bento Box from #NobuFiftySeven & #NobuDowntown. Our most indulgent menu features ⠀ Yellowtail Jalapeño ⠀ Sashimi Salad⠀ Mini Chirashi⠀ Black Cod with Miso⠀ Rock Shrimp Tempura with Creamy Spicy Sauce⠀ Sauteed Vegetables in Spicy Garlic ⠀ Rice & Miso Soup ⠀ ⠀ Available for takeaway only. #NobuRestaurants #NobuatHome

Nakayama is a breath of fresh air in a sea of Japanese celebrity chefs. The woman is breaking gender barriers with her expertise in Kaiseki, a practice that highlights the seasonality and balance of a series of dishes, and a culinary art that has been historically dominated by men. Nakayama started her journey in the culinary world after she took a trip to Japan where she was exposed to different kinds of Japanese cuisine.

Nakayama’s feature in Netflix’s Chef’s Table made her a household name. Now, she’s busy with her project n/naka that applies the artistic and technical concepts of kaiseki to give her audience an ever-evolving seasonal narrative in each meal. The restaurateur admitted that while her restaurant will still be profitable in this time, they would unfortunatey have to cut back on the number of staff.

“Maybe we would have to alternate the shifts so that everybody gets to work, but just not together at the same time,” she stated in an interview with LA Times.

Born to Filipino parents in Chicago, Dale Talde’s love affair with the culinary arts started at his family’s kitchen where he would see his mother cook. After graduating from the Culinary Institute of America, Talde competed in several competitions before opening Talde, his first restaurant located in Brooklyn. He prides himself on his unique takes on inauthentic recipes from the Philippines such as Kung Pao Chicken Wings. Clearly, his style manifests his colorful immigrant upbringing.

Now, he is busy with his new venture, Goose feather was closed for a few weeks following the New York state mandate. On his Instagram, he rallies for people to support small businesses in this pandemic. He is also offering catering thru @foodcrushhospitality.

With the increasing popularity of his own Netflix shows Ugly Delicious, and Breakfast, Lunch & Dinner, it may be tempting to say the Korean-American chef, author, and television personality has reached his peak. However, Chang boasts great talent in offering his fans with cooking lessons at home during quarantine and has offered private lessons on Airbnb.

In an interview with CNBC, Chang recently said that this is “easily the hardest couple weeks of my life.” Now, the chef is making sure he is taking care of his employees. In another interview with The New York Times, he shared that for the service industry, there will be a high business death rate and that those who will survive will most possibly be the big chains. Despite this, he hopes the tech and restaurant world will unite to scale and automate cooking and delivery.

The “New Normal” for these Chefs

Gone are the days when you would sit at Nobu or Momofuku with your closest friends and eat to your heart’s content. While it may take a while for everything to get back into motion, these celebrity chefs are at the forefront of “the new normal” as they revolutionize the way people think of food in these tough times.