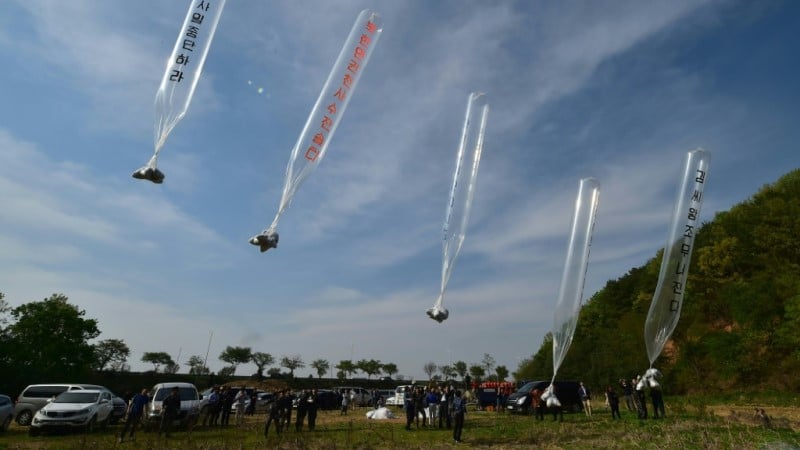 South Korea on Monday banned sending anti-Pyongyang leaflets into the North, in a move rights activists condemned as a violation of free speech and a “misguided strategy” to please the North Korean regime.

Activist groups have long sent flyers critical of North Korean leader Kim Jong Un over human rights abuses and his nuclear ambitions across the Demilitarized Zone that divides the peninsula, either flying them by hot air balloon or floating them across rivers.

The leaflets have infuriated Pyongyang, which issued a series of vitriolic condemnations earlier this year demanding Seoul take action and upped the pressure by blowing up an inter-Korean liaison office on its side of the border.

The leader’s sister and key adviser Kim Yo Jong called the defector activists behind the campaign “human scum hardly worth their value as human beings”.

South Korea’s parliament passed a law criminalising sending leaflets, USB drives — a favoured method of distributing information and entertainment — or money to the North with all 187 MPs in attendance approving the bill.

President Moon Jae-in has long championed engagement with the North and his Democratic party has an absolute majority in the 300-member assembly, while all members of the conservative opposition People Power Party boycotted the vote.

Under the measure, those convicted of sending leaflets face a maximum penalty of three years in prison or a fine of 30 million won ($28,000).

Park Sang-hak, the chairman of Fighters for a Free North Korea, one of the leaflet-sending groups, was defiant and vowed to continue their activities.

“I do not accept this as a rightful law and will continue doing what I’ve been doing: delivering a message of freedom to 25 million people across the border,” he told AFP.

“North Korea stands as the only country on Earth that completely shuts its people off from the internet,” he added. “This criminalization is a barbaric act that violates their right to know the truth.”

New York-based Human Rights Watch had called on parliament to reject the proposal, saying it would violate freedom of expression and turn humanitarian activity into a “criminal offence”.

Both Koreas used to regularly send leaflets to the other side, but agreed to stop such propaganda activities — including loudspeaker broadcasts along the frontier — in the Panmunjom Declaration signed by Moon and Kim and at their first summit in 2018.

But in the South civilian groups, mainly led by defectors, continued their anti-Kim activity in border areas.

South Korean residents in the border areas had for years asked the authorities to ban the activity, fearing military action by the North against the launch sites.

Inter-Korean relations have been in the deep freeze following the collapse of a summit between Kim and US President Donald Trump early last year over what the nuclear-armed North would be willing to give up in exchange for a loosening of sanctions.