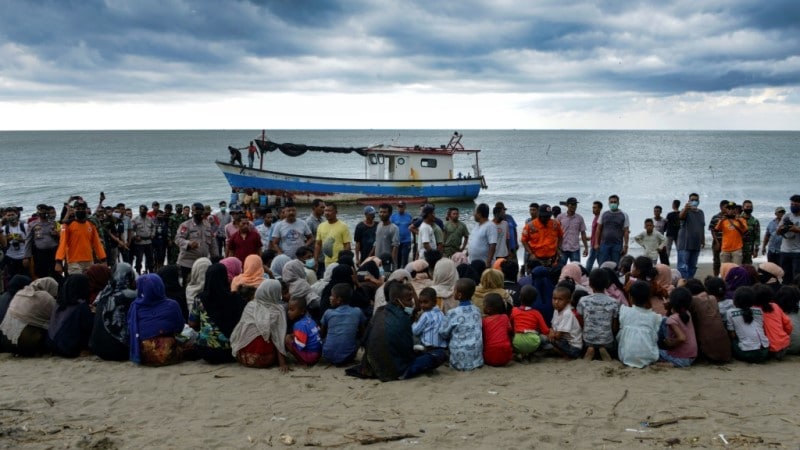 Rohingya refugees are being trafficked by a complex and ever-evolving network, worth many millions of dollars

Aboard the spluttering rickshaws are small groups of young men, women and children hoping to escape the misery of life with other members of their stateless Rohingya group who are crowded into shanties in Bangladesh.

Nineteen-year-old Enamul Hasan was aboard one of the rickshaws early this year, taken to the coast and then by small boat into a bigger fishing vessel anchored in the Bay of Bengal where he joined hundreds of other Rohingya hoping to reach Malaysia.

“I was told I’d get the opportunity to finish my studies and earn money to get my family out of poverty,” Hasan told AFP, recounting the promises of the low-level smuggler in the camp who was his main contact for organizing the trip. 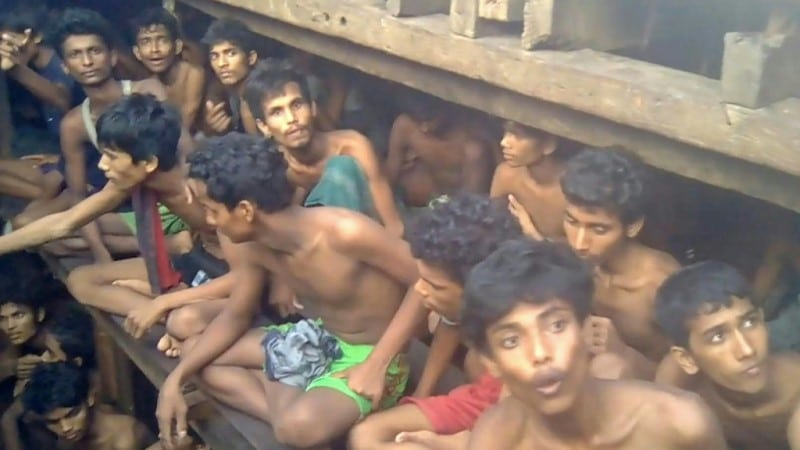 Instead, after enduring beatings by crew members and watching others die during more than six weeks at sea, Hasan’s boat returned to Bangladesh and he is back in his squalid home.

“I will never forget what I’ve been through. The traffickers, the brutality of the sailors… I’d never do it again,” Hasan said.

AFP spoke to Hasan as part of an in-depth investigation into the people smuggling network that included dozens of interviews with refugees in Bangladesh and Indonesia, where hundreds arrived this year after months at sea.

The investigation revealed a sophisticated and always-evolving operation worth many millions of dollars in which members of the Rohingya community play a key role in trafficking their own people.

Thai-registered fishing boats capable of holding 1,000 people, satellite phones, a mini-armada of smaller supply vessels and corrupt officials across Southeast Asia, as well as in the Bangladeshi camp, are also integral to the network.

“It’s a big business that uses humanity as its cover,” said Iskandar Dewantara, co-founder of the Geutanyoe Foundation, an Indonesia-based refugee advocacy group.

It can also be brutal.

Hasan provided to AFP footage from a mobile phone he said had belonged to one of the Burmese crew members showing them beating the passengers.

In the video, a trafficker uses what appears to be a whip to repeatedly strike shirtless men huddled together, with rake-thin children and women crowded around them.

The sailor who owned the phone left it when the crew abandoned the boat following a mutiny at sea, according to Hasan. 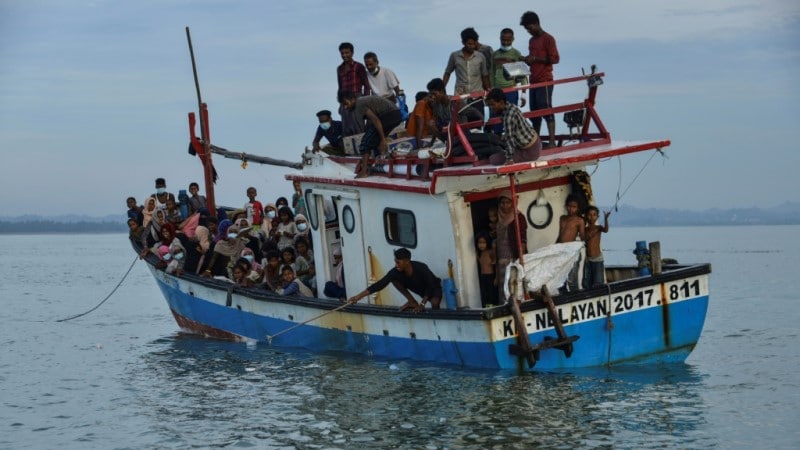 Refugees who made it to Indonesia told stories of beatings, near-starvation and threats to hold passengers hostage until their relatives paid more money

Muslim Rohingya have for decades endured persecution in Buddhist-majority Myanmar, where they are not recognised as citizens, and smuggling routes out by land and sea have long existed.

Relatively affluent and Muslim Malaysia has been the main destination.

More than 100,000 Rohingya now live on the margins of society in Malaysia, registered as refugees but not allowed to work, forcing the men into illegal construction and other low-paid jobs.

A Myanmar military crackdown in 2017, which UN investigators said amounted to genocide, turbo-charged the exodus, forcing 750,000 Rohingya to flee across the border into Bangladesh’s southeast coastal district of Cox’s Bazar.

That is now a sprawling refugee camp of one million people from where the only way out is the dangerous boat journeys.

Spurring the demand are the Rohingya men in Malaysia who pay smugglers to bring over families, or new brides from arranged marriages, according to advocacy groups and women involved.

Malaysian authorities frequently turn back boats, and fears over Covid-19 have amplified their intolerance for more refugees.

However, nearly 500 Rohingya made it to Malaysia in three vessels this year, according to an AFP tally from the landings.

Since June, about 400 Rohingya have also landed in northern Indonesia — all trying to reach neighbouring Malaysia — in the biggest wave of arrivals there in five years.

Hundreds more are believed to have died at sea from beatings, starvation or dehydration, while other boats have returned to Bangladesh.

Many of the boat people who arrived in Indonesia were women.

Among them was 18-year-old Janu, who told AFP at a makeshift refugee camp in Lhokseumawe, a coastal town in Indonesia’s Aceh province, that her family had arranged for her to marry a Rohingya man working as a laborer in Malaysia.

“I had been waiting in the camp for two years, it was worth the risk,” Janu said, hoping that like some others had already done she may now be able to find a way to Malaysia. 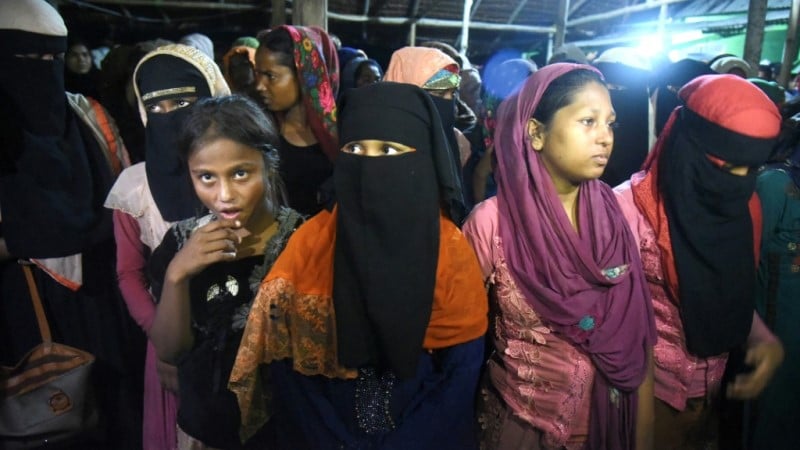 Many of the Rohingya making the crossing to Indonesia are women, hoping to move on to Malaysia for arranged marriages

Escaping the Bangladesh camp starts with a down payment that can reach the equivalent of $2,000, often paid by a refugee’s husband or other relatives in Malaysia using mobile banking applications.

Refugees then get a phone call typically from someone they do not know.

“The call came after a few days and a man instructed us to go to the rickshaw stand in the main food market area of the camp,” said 20-year-old Julekha Begum, who married a Rohingya man in Malaysia via a video chat app.

Rickshaw drivers hired by traffickers take refugees to several barbed-wire security checkpoints, where security forces typically wave them through for a bribe.

Then it is a few hours’ drive to half a dozen take-off zones identified by AFP that line the coast and where thousands of fishing boats make their way out to sea for nightly expeditions. 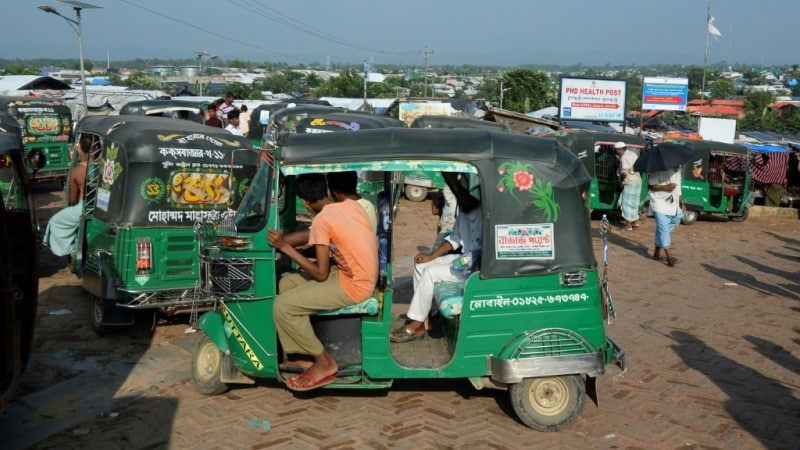 Refugees are taken to checkpoints at the camp’s edges by rickshaw drivers, where security forces typically wave them through for a bribe

The Rohingya wait until small boats that hold about a dozen people fill up before they’re taken to much bigger ships far out at sea — sometimes two-story fishing vessels capable of holding 1,000 people.

The big boats, usually piloted by crews from Myanmar, are equipped with GPS equipment, mobile communications as well as food and drinking water.

“When we go and check these boats, we see fishing nets and other fishing gear. It is very difficult for us to differentiate between actual fishermen and smugglers.”

Once on their way to Malaysia, smaller boats regularly bring food and water to the big vessels. 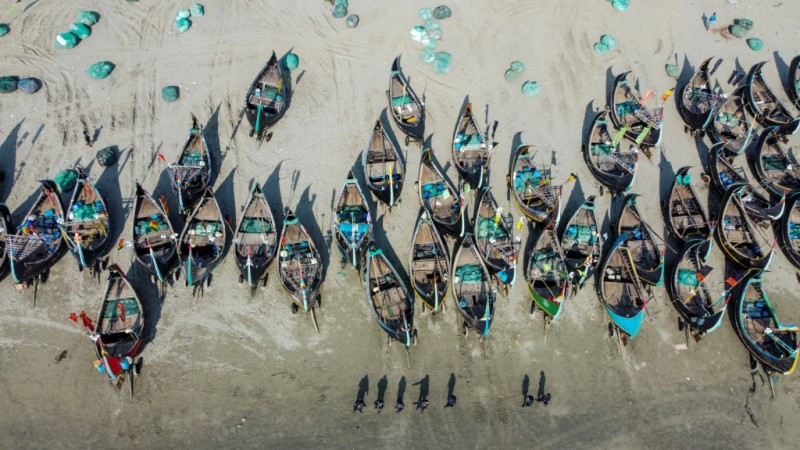 The refugee camp in Cox’s Bazar contains one million people; the only way out is the dangerous boat journey

Rohingya interviewed by AFP said they were told they would arrive in Malaysia — roughly 4,000 kilometers (2,500 miles away) in a week.

In reality, the trip takes months — if they make it at all.

Refugees who made it to Indonesia told stories of beatings and torture, near-starvation rations and threats to hold passengers hostage until their relatives paid more money.

They told varying accounts of the main boats sailing near Malaysia and some passengers being unloaded onto smaller ones for their final destination after relatives paid more money in what were essentially ransom demands. 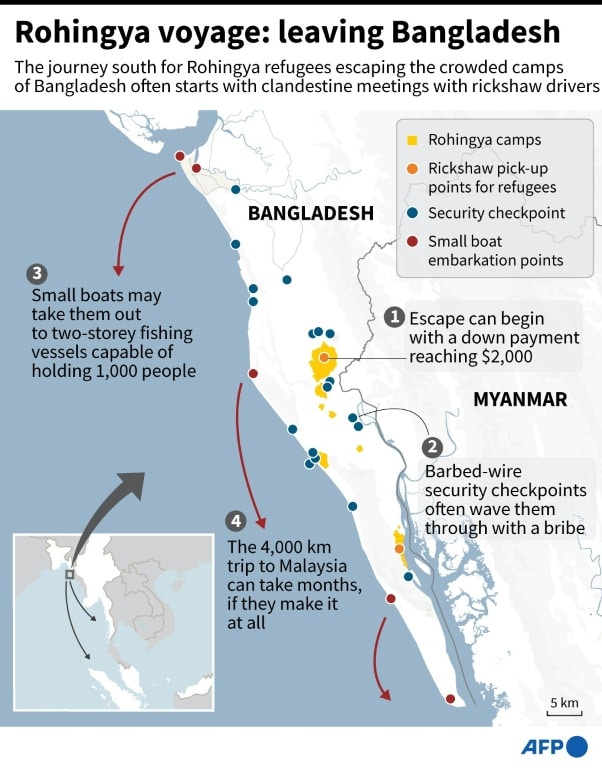 Another passenger, Mohammad Nizam, said he was kept off a smaller, Malaysia-bound boat because of a lack of money.

“They were asking for more money than we had agreed earlier, but my parents couldn’t afford it,” said 25-year-old Nizam.

“If you pay more you will be brought (directly) to Malaysia.”

One boatload of up to 1,000 passengers can be worth up to $3 million for the smugglers, according to authorities.

Indonesian fishermen initially claimed they had rescued the first boatload of about 100 Rohingya in June.

However, the purported “rescue” was in fact a coordinated effort by the smugglers to avoid the tighter border controls in Malaysia, authorities and traffickers involved in the operation said.

“They created this public perception that the fishermen had found them after their boat capsized,” said Sony Sanjaya, director of the general crime division for Aceh’s police.

“But their arrival here wasn’t an accident.”

Once in Indonesia, the smugglers hope to get the Rohingya into Malaysia via a narrow sea crossing that separates the two countries, according to local authorities.

However, most remain stuck in the Lhokseumawe camp, two former school buildings that local authorities have set aside for the new arrivals.

Three local fishermen were among a handful of alleged traffickers arrested in October in connection with the June landing.

Interviewed by AFP at a lockup in Aceh, the men said they were hired by a Rohingya man living in Indonesia — who was also arrested — to rent a boat and later to pick up a vessel filled with refugees.

“I desperately needed money then so I took the job,” said father-of-six Faisal.

The fishermen were given location coordinates and instructed to flash packages of popular clove-infused cigarettes so the boat traffickers would recognise them, authorities said. 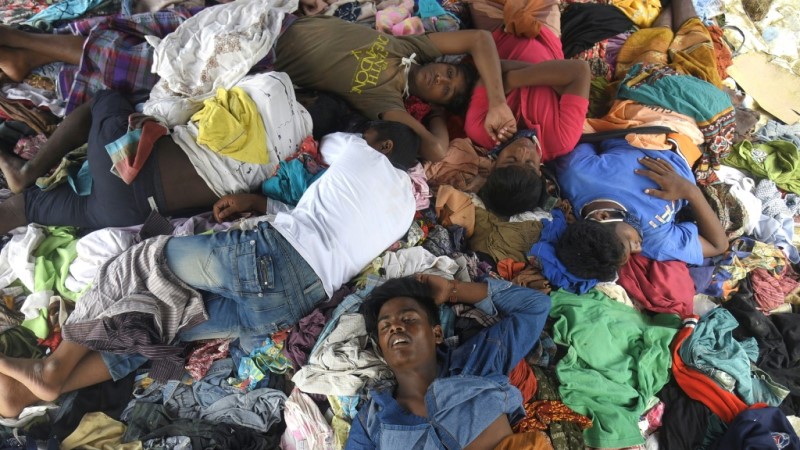 Some Rohingya say they were told the crossing to Malaysia would take a week; in reality, it takes months, if they make it all

Inside the camps in Bangladesh, a complex mix of compassion, desperation and greed appears to drive the people trafficking network, which has links to the illicit drug trade.

The region is a well-known manufacturing hub of yaba, a cheap methamphetamine popular across Southeast Asia.

AFP spoke with a 25-year-old man who said he was born in one of the oldest refugee settlements in Bangladesh and started working for a Rohingya organized crime leader at the age of 14.

He asked only to be identified by his first name, Mohammed.

“I worked for him for two years and managed to get at least 200 Rohingya willing to go to Malaysia and away from the madness of these camps,” Mohammed said, adding he was paid the equivalent of $550 a month for finding people. 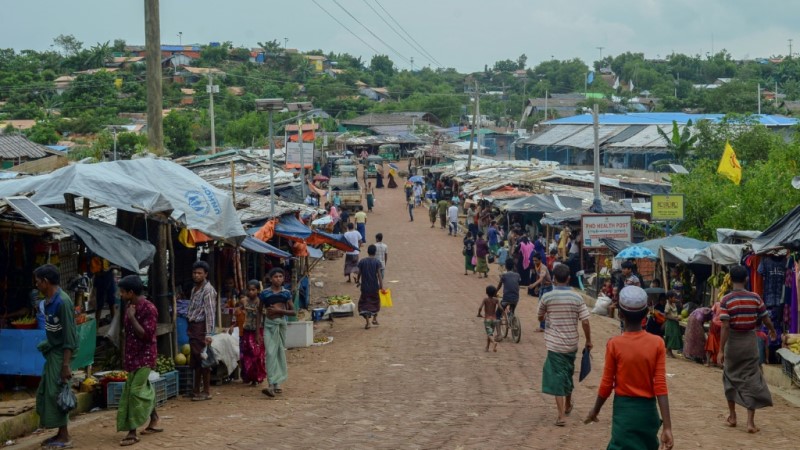 Members of the Rohingya community play a key role in the trafficking, for a variety of reasons ranging from financial gain to compassion

Mohammed said Bangladeshi security forces eventually shot his boss dead, and after a few years out of the trade he is scouting for another way to get back in.

“If I can’t find an opening here, I’ll start doing it myself using my own contacts (overseas),” he said, talking about the money he hoped to make.

But other Rohingya involved in the trafficking in Cox’s Bazar describe their work as a moral duty.

“This is community welfare, not a crime,” said Mohammad Taher, 34, who arranges the rickshaw escape trips past the checkpoints and onto the small boats.

“If someone wants to get out of this hellish place, as a sensible brother, I think it’s my duty to show them the way out.”

by Sam Jahan, with Haeril Halim and Peter Brieger