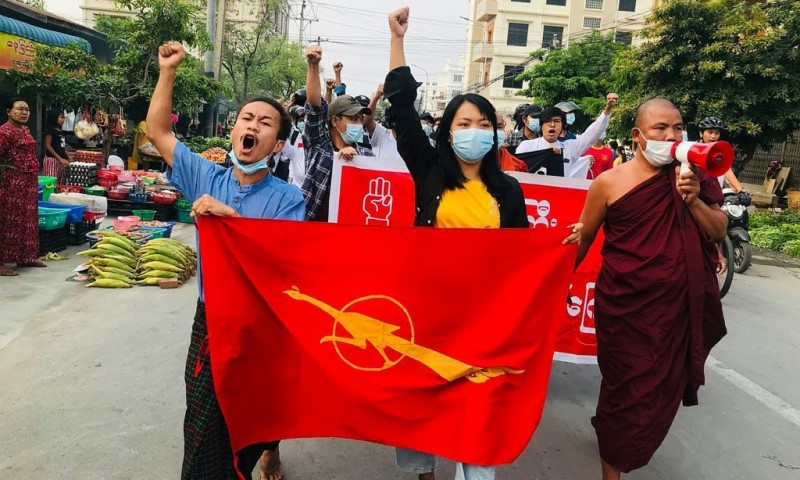 Despite the military using lethal force to quell demonstrations, people in Myanmar have continued to take to the streets to protest the coup

Myanmar’s military opened fire on protesting healthcare workers Thursday, killing at least one bystander as the demonstrators fled for safety to a nearby mosque.

The country has been in turmoil since the military seized power from civilian leader Aung San Suu Kyi on February 1, triggering a massive uprising that the junta has sought to quell using lethal force.

But protesters have continued taking to the streets, this week using the Myanmar New Year holiday of Thingyan as their latest rallying point as the normal festivities have been cancelled.

In Myanmar’s second-largest city Mandalay, a demonstration by medical workers Thursday turned violent when soldiers opened fire, sending them running to the mosque. 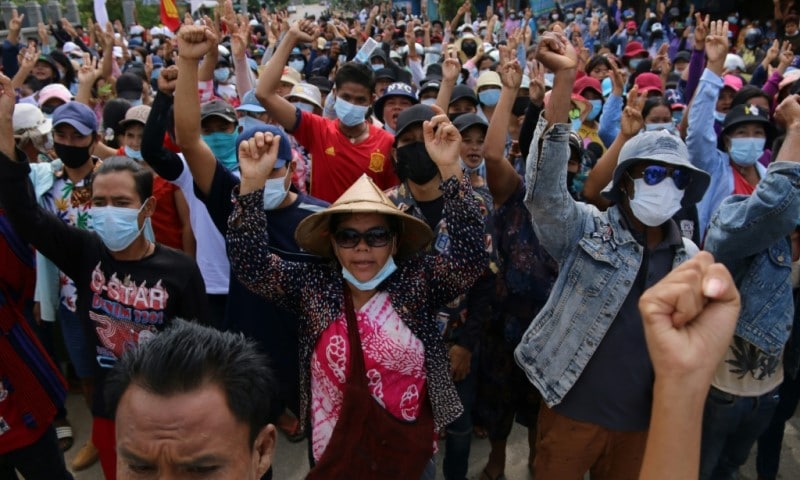 The junta has sought to quell anti-coup protests using lethal force, but the movement remains undeterred

“They were shooting everywhere… they were targeting the Sule mosque compound because people in there were hiding protesters,” said an eyewitness.

A 30-year-old man who lived in the compound was shot dead, and at least two others were injured, said a doctor who treated the wounded.

“The man who died was shot from the back and it penetrated through his chest,” he told AFP.

A medic who participated in the protest said he saw the arrest of six nurses and doctors during the crackdown.

“We lost contact with some medical team members as well,” he told AFP.

Myanmar’s healthcare workers have been at the forefront of a nationwide civil disobedience movement, refusing to return to work under a military regime. Their absence has left many of the country’s hospitals unstaffed during the pandemic.

Civil servants from other sectors have followed suit, bringing the operation of the country’s banks, schools, railway operations, and businesses to a halt.

The junta has tried to force people back to work, and on Thursday, state-run media reported that at least 20 doctors participating in the movement will be charged for attempting to “deteriorate peace and stability”.

So far, more than 700 civilians have been killed in anti-coup unrest, according to a local monitoring group, and more than 3,000 have been detained.

A well-known protest leader was arrested Thursday in central Monywa city — he was leading a demonstration by motorbike when a car rammed into him.

“Wai Moe Naing was arrested… I saw his motorcycle hit by the car from afar,” fellow activist Hein Zaw Win told AFP, vowing to “continue our protests until we win.” 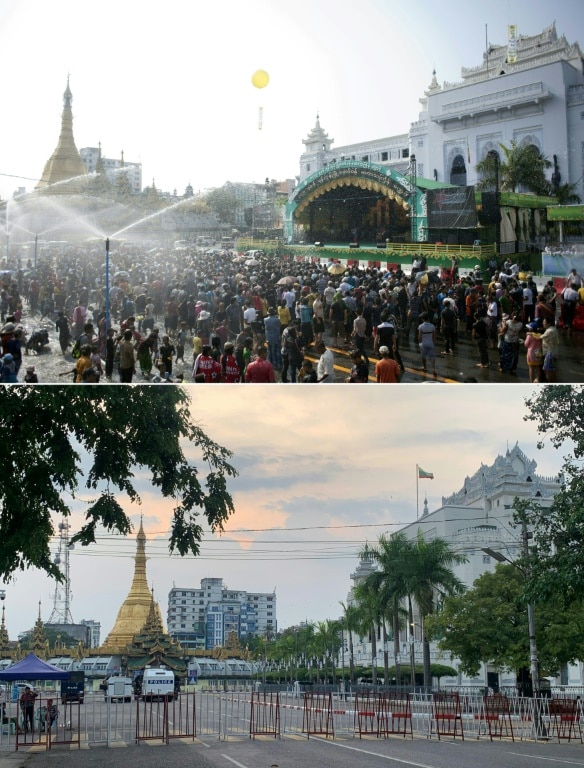 The main boulevards of commercial hub Yangon were empty Thursday — a far cry from the Thingyan celebrations of previous years that would see revellers dancing on the streets while being hosed down.

This year, public water fights have been canceled.

“We may feel depressed because many of our people are killed every day… but we never feel that we will lose this battle,” a Yangon resident told AFP, adding that he and his family were marking the new year at home.

“Thingyan is just like any other day of revolution.”

The US embassy in Yangon on Thursday dedicated a post to the “fallen heroes in Myanmar”, laying petals of the yellow Padauk flowers — the symbol of Thingyan — around a make-shift plaque.