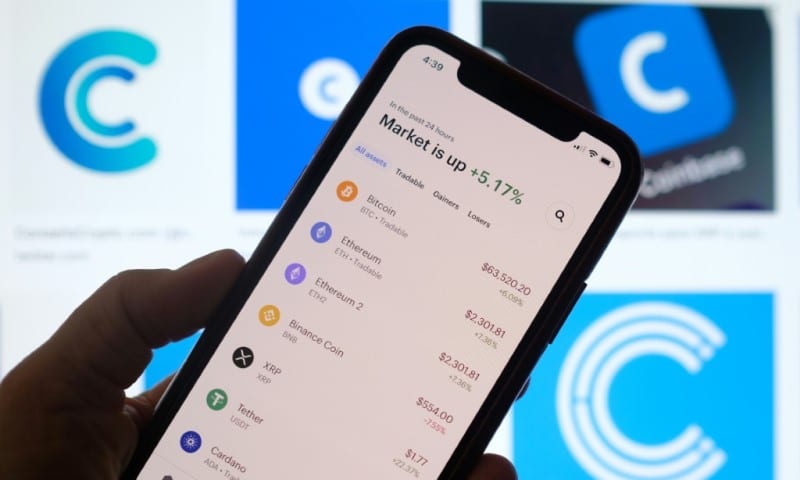 This illustration photo shows the Coinbase logo in the background as a person checks cryptocurrencies prizes on a smartphone in Los Angeles on April 13, 2021

Cryptocurrency exchange Coinbase made a dramatic stock market debut Wednesday amid frenzied interest in bitcoin and other virtual currencies despite concerns about a bubble.

The enterprise, the first company devoted entirely to cryptocurrency to enter the US stock exchange, debuted on the market well above its reference price and quickly rocketed higher before pulling back somewhat.

The premier “went successfully,” said Art Hogan, chief market strategist at National Securities. “We’ll have to see how this plays out and then see if this particular publicly traded stock is as volatile as the cryptocurrencies that it transactions.” 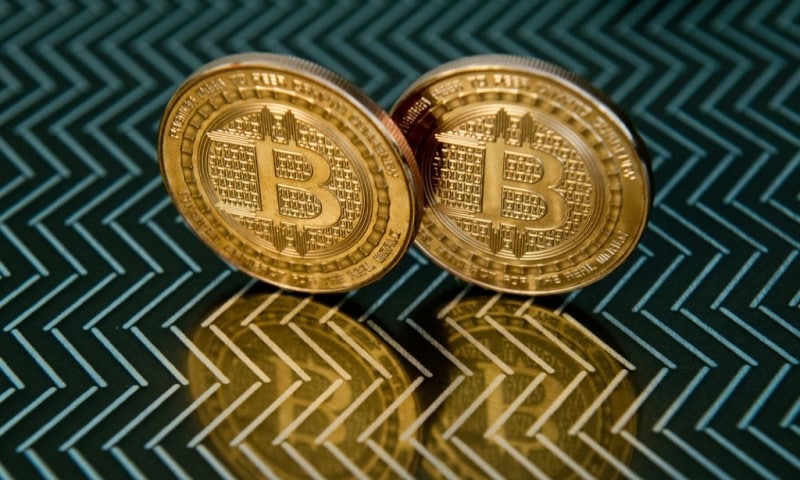 The arrival of the first cryptocurrency exchange on the Nasdaq, Coinbase, is a sign of the frenzy over bitcoin and other virtual currencies

The company ended the day with a market value around $86 billion after topping $100 billion earlier in the session.

Coinbase chose a direct listing, which does not allow it to raise new funds but does offer current shareholders — founders, employees and historical investors — the opportunity to sell their shares on the market.

Spotify, Slack, Palantir and Roblox have also used this method for their Wall Street debuts.

Coinbase has benefited from bitcoin’s meteoric rise over the past year, with the crypto asset’s price rising from $6,500 last April to new records of as high as $64,000 Wednesday before retreating somewhat.

Other virtual currencies — such as ether, Litecoin or Stellar Lumens — have also surged in line with bitcoin.

The Coinbase entry “is potentially a watershed event for the crypto industry,” said Daniel Ives at Wedbush Securities.

“Coinbase is a foundational piece of the crypto ecosystem and is a barometer for the growing mainstream adoption of bitcoin and crypto for the coming years, in our opinion.”

Founded in 2012 in San Francisco by Brian Armstrong and Fred Ehrsam, the platform allows users to buy and sell about 50 cryptocurrencies, including bitcoin and ether.

Coinbase claims 56 million total users and more than six million people making transactions each month, according to estimates from its first-quarter results, released in early April.

“With bitcoin already having more than doubled in the last six months and cryptocurrencies becoming more popular with more mainstream investors, it can certainly be argued that crypto has become more mainstream in the last 12 months,” said Michael Hewson, chief market analyst at CMC Markets UK.

As a result of this craze, Coinbase’s revenue has increased almost tenfold in the course of a year to $1.8 billion in the first quarter, according to company estimates.

The success of Coinbase and cryptocurrencies in general has given some rivals ideas: the head of the California-based cryptocurrency exchange platform Kraken told CNBC last week he hopes to take his company public next year, also via a direct listing.

If the situation seems favorable to Coinbase, questions remain the order of the day among observers, who recall the company’s dependence on the price of virtual currencies, which tend to be volatile.

Before its spectacular rise in recent months, bitcoin had experienced setbacks, particularly in 2018 when it kept falling.

Some also are drawing attention to the distrust of lawmakers in several countries who are concerned about cryptocurrencies being used for illicit purposes.

“The bigger question is whether any valuation is sustainable, particularly given how many governments aren’t particularly enamored of cryptocurrencies,” Hewson said.

“Future regulation is likely to be a clear and present danger and a probable headwind” in the long term.

Armstrong acknowledged Wednesday that regulation is one of the biggest risks facing the cryptocurrency business.

“Especially now that Coinbase is a public company, we’re gonna increasingly be having scrutiny about what we’re doing and people want to understand the implications of it,” Armstrong told CNBC.

“We’re very happy to engage,” Armstrong told the network. “We’re very excited and happy to play by the rules… We want to be treated on those level playing field with traditional financial services at the very least and not have any kind of punishment for being in the crypto space.”

Coinbase was recently charged by the US Commodity Futures Trading Commission with “reporting false, misleading, or inaccurate” information about cryptocurrencies and manipulating the market between 2015 and 2018.

In a settlement, Coinbase paid a $6.5 million fine, and the company was forced to push back its listing date on Wall Street.