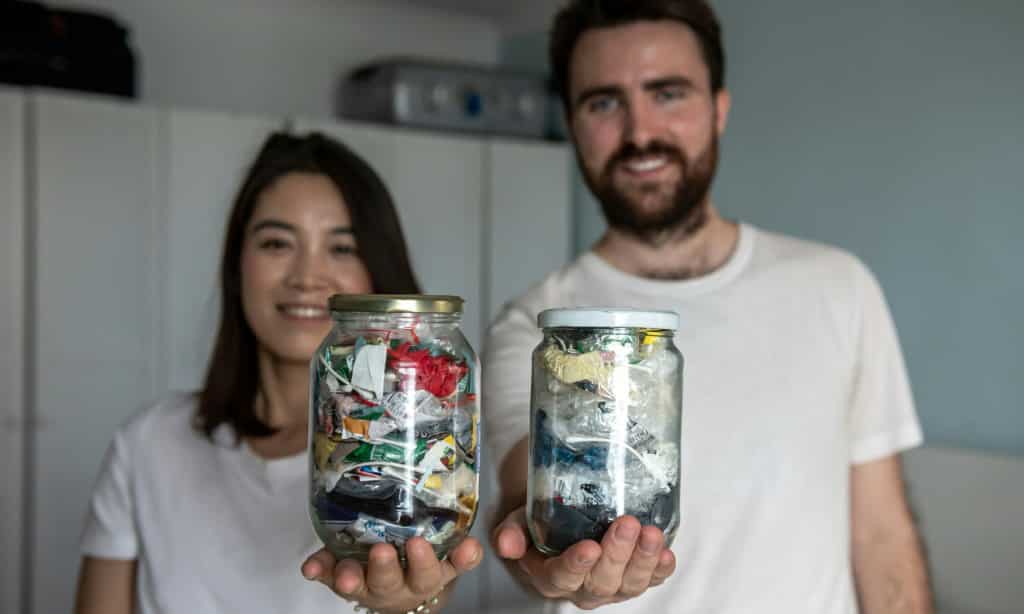 Carrie Yu and Joe Harvey, founders of zero-waste shop The Bulk House, pose with jars containing all of their personal waste collected over three months at their home in Beijing

But the growing embrace of consumerism is generating mountains of waste: The nation will produce as much as 500 million tons of waste annually by 2030, the World Bank warns, up from just 30 million in 1980.

There are signs of a fightback against convenience culture — this week the government announced plans to ban plastic bags in major cities and single-use straws from restaurants by the end of this year.

The zero-waste movement is also grabbing public attention as its vocal followers try to spread the message of mindful consumption.

“Everything is wrapped with plastic, because that’s convenient, but actually the cost of convenience is tremendous,” says Beijing resident Carrie Yu, who has committed to “zero-waste” living since 2016. 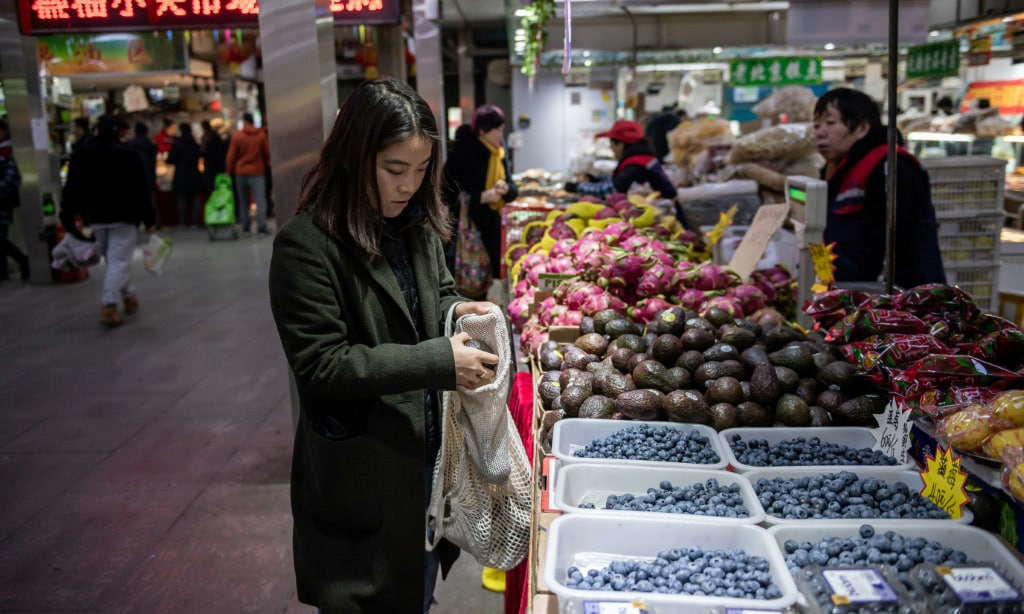 The zero-waste movement is also becoming popular amongst the public in China, with a growing number keen to embrace and spread the message of mindful consumption

By recycling, repurposing and composting most of their garbage, Yu and her British partner Joe Harvey, are able to fit three months of household waste into just two jars.

Nearly every object in the minimalist apartment they share was selected with reusability and low environmental impact in mind.

A cardboard egg carton sits on a shelf waiting to be reused multiple times before being recycled.

Cloth make-up remover pads are hung up to dry after washing. Many of Yu’s clothes are second-hand or refashioned from worn-out garments.

She buys unpackaged groceries at a local market, and makes sure to avoid restaurants that use disposable chopsticks.

GoZeroWaste, an organisation set up by Beijing-based activist Elsa Tang, has members in 19 cities across China who meet to swap unwanted items and exchange tips on living more sustainably.

“If we make more responsible choices, we’re not only acting responsibly toward the environment, we’re also being responsible for our lives and our health, and can actually make many changes,” Tang said.

For decades, Chinese people lived in a planned economy where everyday goods were rationed and imported products were a luxury.

Some aspects of zero-waste living, such as reusing packaging, are familiar to older Chinese people.

It used to be common for merchants in the country to require packaging deposits for everyday goods like beer and yogurt, said Mao Da, an environmental history professor at Beijing Normal University and member of the China Zero-Waste Alliance.

“We used to think frugality was a glorious tradition,” Mao told AFP.

In the past, people would catch fish from the rivers and lakes near her village, but “you can see the pristine water right now just full of rubbish,” explained Yu, who grew up in rural Hubei province, near Wuhan.

Growing incomes and the rise of shopping and delivery apps like Taobao and Meituan have now put impulse shopping and next-day delivery within the reach of millions.

Young people who moved away to cities “just bring so many things with packaging” whenever they return to visit, the 28-year-old said.

China produced 210 million tonnes of waste in 2017, according to World Bank data, lower than the United States figure of 258 million but expected to jump dramatically as incomes grow. 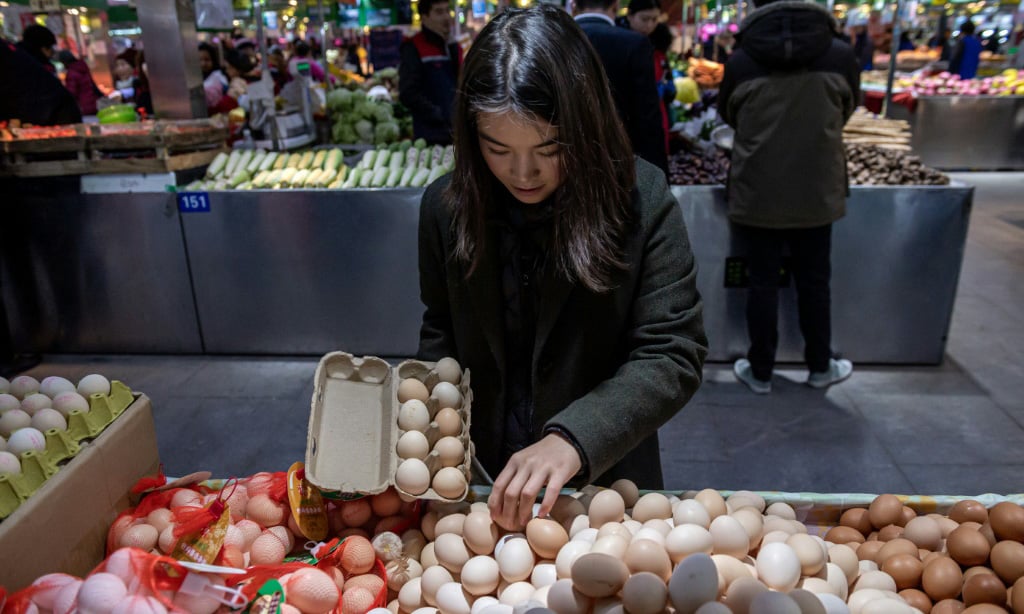 Shanghai launched an ambitious garbage separation and recycling program in July, requiring residents to sort their own trash or risk fines. Beijing is set to roll out similar regulations this year.

In a document released Sunday, the government said the production and sale of disposable polystyrene and plastic tableware will be banned by the end of the year.

The plan also outlaws single-use straws in the food and beverage industry this year, while disposable plastic products should not be “actively provided” by hotels by 2022.

But corporations tend to emphasize recycling rather than reducing consumption in the first place, even though “we must contain the total volume of the material being consumed,” Mao said.

Yu and Harvey are keen to encourage others to try their way of life and have launched The Bulk House, an online store that sells alternatives to single-use products including biodegradable tape made from cornstarch and washable menstrual pads.

Yu, who made the change after a difficult move forced her to part with most of her belongings and confront her shopping habit, feels the “zero-waste” approach is good for people as well as the planet.

She explained: “I just feel so much lighter.” 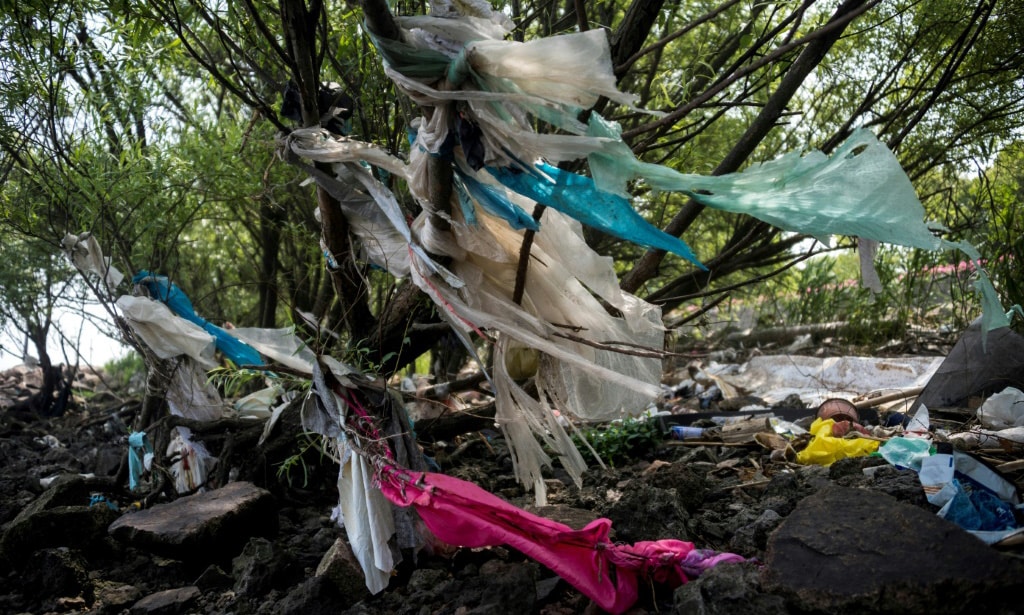