Ashin Wirathu and the Fires of Ethnic Hate 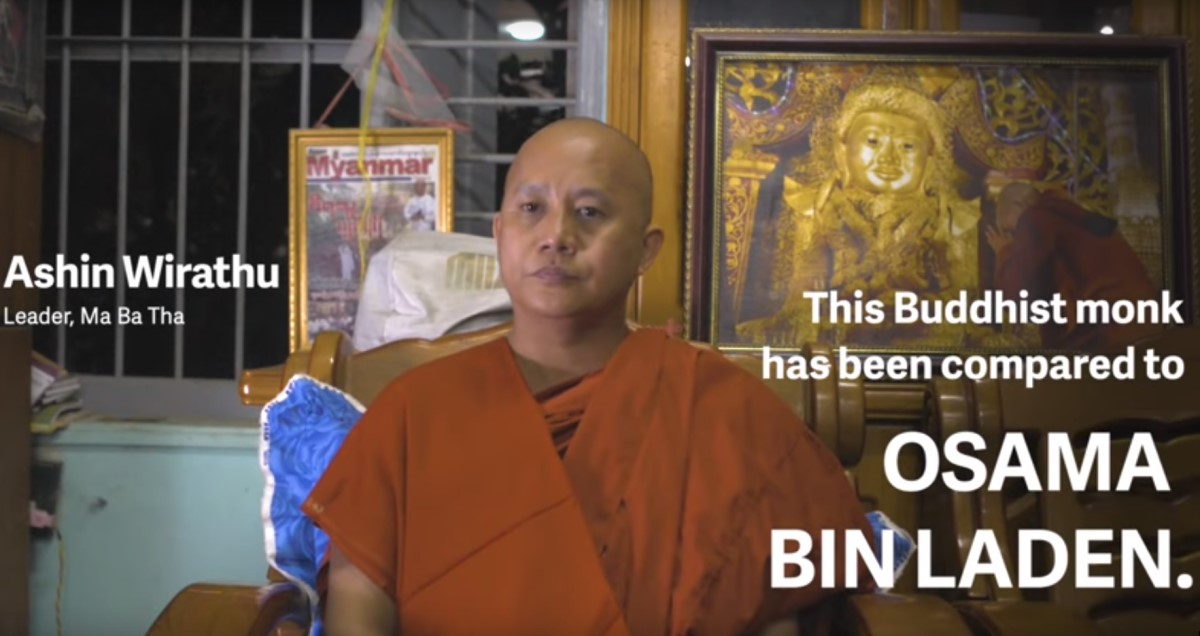 When does Buddhism cease to be a religion of peace, and becomes a fuse for ethnic cleansing?

Historically, nationalism has always had a negative connotation because it has spawned so many extreme ‘variations’ that have harmed entire nations and peoples. The reliance on this type of ideology causes strife – as is the case in the ultra-nationalism by the Buddhist population in Myanmar, that pits Muslims against Buddhists. Of course, the expression of this extremist nationalism is uneven. Not everyone is openly calling out to harm, arrest, or expel Muslim Rohingyas from Myanmar.

But the fact that the Myanmar government has been unable to quell the extremism completely and is mum about its own military’s involvement in abusing, hunting down and causing the migration of hundreds of thousands of stateless Rohingyas is proof that this openly exclusionary brand of nationalism rooted in ethnic conflict is not isolated to extremist movements, but is widespread and deeply entrenched as a dominant ideology of the Burmese state itself. And what the state allows is imbibed by the nation – in this case, a nation that is predominantly Buddhist.

Ashin Wirathu is a Buddhist monk who is said to have founded the 969 Movement in Myanmar. Utilizing jingoistic speech and directly stoking violence between Buddhists and the stateless Rohingya, Wirathu has been called the “Burmese bin Laden” because of his role in the ultra-nationalist 969 Movement, which has long called for expulsion and harming of Muslims in the country.

Wirathu believes and preaches that Islam is gobbling up Buddhists in Myanmar, and in his he has likened living with Muslims as “living with snakes.” Wirathu insists that his ‘work’ which is largely appearing in public to preach hate against Muslims, is in the service of the and that as a Buddhist monk, he expects no thanks in return.

He has appeared on the cover of TIME before, with the headline “The Face of Buddhist Terror.” After being censured by the Myanmar government due to increasing international pressure, Wirathu has turned to social media, and particularly to Facebook, to record and distribute hate speeches and intrigue against the Rakhine state. Facebook has recently brought down his Page because of its consistent stream of hate speech, which, according to Facebook, is unacceptable.

Unfortunately, Wirathu has a lot of supporters and much of the content that he has already uploaded onto his page has been copied and re-uploaded by supporters and by people from abroad who are also Islamophobic. It is estimated that upwards to 700,000 Rohingyas have been displaced by the combined efforts of the Myanmar military and public figures like Wirathu, creating a humanitarian crisis of such a massive scale that countries around the world are finding it extremely challenging to help because of the sheer number of stateless people who are fleeing what has been tagged as outright ethnic cleansing.

Despite the weight of international criticism aimed at his hate speeches, Wirathu himself is not backing down. The Burmese firebrand is known for casting aside detractors, and his recent statement on the international criticism aimed at him shows that he is not losing sleep over his activities – and he probably never will. Often addressing himself in the third person, he stated that “the day the ICC (International Criminal Court) comes here… is the day that Wirathu holds a gun.”

He continued further that the international outcry against the 969 Movement and his work as a hate-monger is rooted in the desire to support “Islamisation” in his country: “Don’t lie to the world saying that Bengalis are Rohingya, because you want to promote Islamisation in Myanmar. Don’t destroy our country by creating a fake ethnic group.” Wirathu avoids calling the Rohingya by their name and instead resorts to several other names to discredit their existence – like calling them “Bengali” to ‘prove’ that they are not ethnically Burmese.