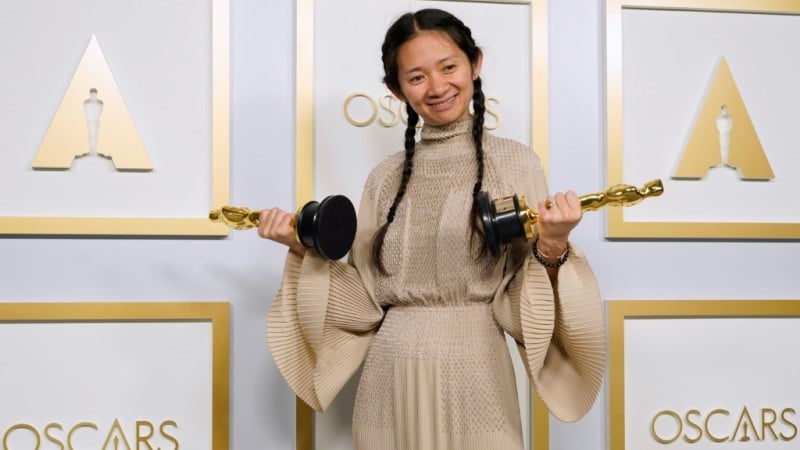 Beijing-born Chloe Zhao was scrubbed from Chinese social media on Monday as a nationalist backlash airbrushed out her remarkable achievement of becoming the first woman of colour to win the best director Oscar.

Zhao on Sunday night became the second woman ever to win the coveted award at the Oscars, as her film “Nomadland” — about marginalized Americans roaming the west — bagged best picture and its lead, Frances McDormand, won best actress.

But all recent posts containing her name and “Nomadland” were mysteriously wiped from the Twitter-like site Weibo by Monday noon Beijing time.

Her win was also met with silence by Chinese media.

Initially hailed by state media for her film’s success at the Golden Globes in March, Zhao became the target of a nationalist backlash after social media users dug up years-old interviews in which she appeared to criticise her country of birth.

This year’s Oscars were also not aired on Chinese television or streaming channels.

Zhao appeared to allude to these difficulties in her Oscars acceptance speech, saying, “I’ve been thinking a lot lately of how I keep going when things get hard.”

She also quoted a line from a Classical Chinese poem that translates to “people are fundamentally good at birth” — a move praised by many Chinese social media users, before the posts were deleted.

Weibo was initially flooded with posts praising Zhao on Monday morning, while others decried censorship.

“Chloe Zhao becomes the first Asian diaspora/Chinese female filmmaker to win the best director Oscar in history,” wrote an entertainment blogger with more than 8.9 million followers, in a post that gained thousands of likes before it was deleted.

“China’s public opinion control is outrageous. After Chloe Zhao’s starling Oscars win, there is not even a fart on Weibo,” wrote an outraged user.

Despite the censors’ efforts, on the streets of Beijing, pride in an Asian director reaching the apogee of US cinema was easy to find.

“She’s the pride of Chinese people… it’s very rare for a Chinese to get an Oscar award,” Yan Ying, a female engineer, told AFP on Monday morning.

“I think Chinese movies will get better and better and she will set a very good example for Chinese mainland directors,” said 38-year-old legal worker Yuan Min.

Zhao is also well-known in China as the stepdaughter of famous actress Song Dandan.